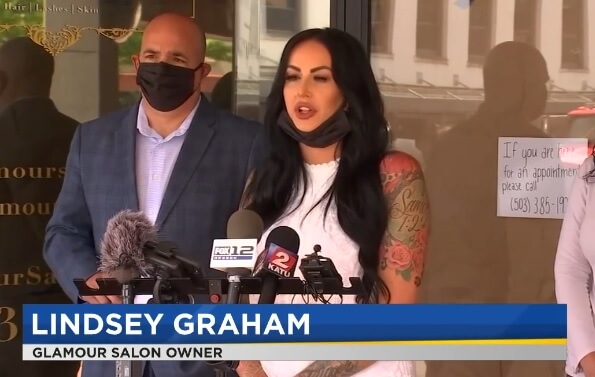 Lindsey Graham opened her Salem salon in defiance of state lockdown orders. In response, Democrat Governor Kate Brown arranged a $14,000 fine through Occupational Safety and Health (Oregon OSHA) and sent Child Protective Services (CPS) to visit her kids at home while Graham was at work.

Late Thursday, Oregon OSHA notified Graham they have been classifying the contractors working in her salon as employees. This is a frontal assault on independent contract work and has no basis in statute. OSHA further informed her that it will issue a $14,000 fine for workplace violations. If allowed to stand, this action puts at risk every beauty salon in the state of Oregon that operates with contractors. OSHA then bullied Graham with the threat of notifying other state agencies and initiating additional investigations.

It appears that Governor Kate Brown has decided to utilize the full weight of the state to target and harass Lindsey Graham — including her family and children.

Graham received a visit from CPS at her home just three days after she reopened her salon.

Here is a timeline of the abuses Kate Brown and her state thugs have thrown at Lindsey and her family over the 10 days.

– On May 2, Lindsay let her clients know that she would open her salon on the 5th of May.
– On May 4, OSHA threatened her with a $70,000 fine.
– On May 5, she reopened her salon in Downtown Salem.
– On May 6, Lindsay received a letter from the city of Salem informing her that she was in violation of the office lease contract. (the city of Salem owns the building her salon occupies)
– On May 7, child protective services showed up at her home while she was at the office to initiate an investigation of her children’s environment.
– On May 14, OSHA told Lindsey they will fine her $14,000 and they will notify other state agencies to initiate additional investigations.

Read the details of the visit to Lindsey’s home from CPS here: