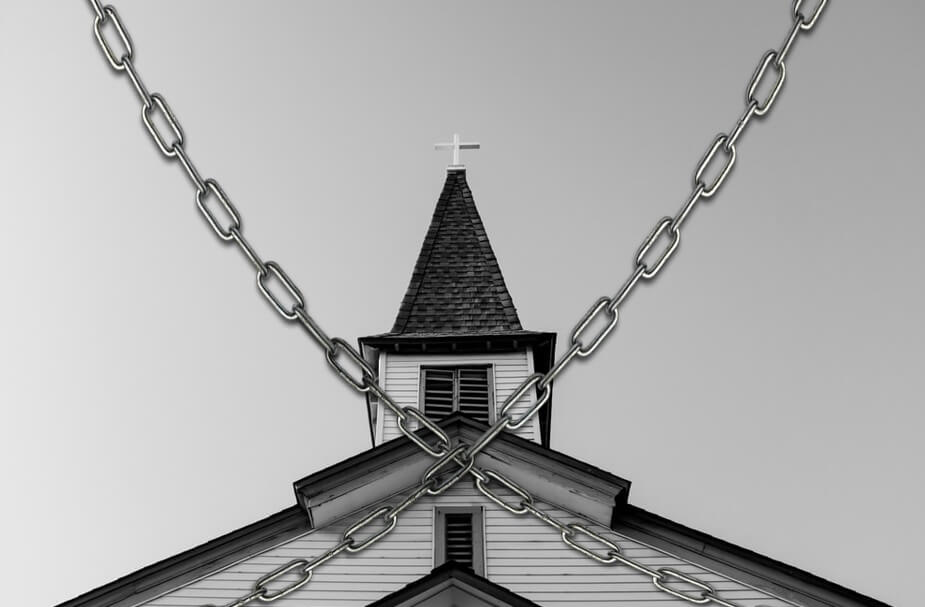 It must be a cold day in hell. How else can we explain that President Trump shows far more spiritual fervor and passion for freedom of religion than the Northwest’s Catholic bishops, and certainly more than any Protestant leaders? Faithful churchgoers across the Northwest have been waiting for “permission” from their governors to attend church … and they still wait. God knows, if they waited for their local faith leaders to defend their rights and open their churches, it might indeed be a cold day in hell.

The best way to characterize our Northwest faith leaders is this: No guts, no glory.

The only exception is a single lawsuit against Oregon Gov. Brown brought in eastern Oregon by a group of 10 courageous churches. Baker County Circuit Court Judge Matt Shirtcliff ruled that Brown had exceeded her emergency authority by extending her stay-at-home order beyond 28 days, thereby making her further orders null and void, opening churches and businesses across the state. The ruling was immediately taken up by Oregon’s Supreme Court, and Brown’s orders were temporarily upheld until the case is reviewed. In a rare show of judicial fairness, Oregon’s chief justice recused herself from the ongoing case due to her personal friendship with the governor. Still, odds are the all Democrat-appointed judges will rule in Brown’s favor, despite more recent law that clearly restricts her authority.

The president’s recent appeal to governors asked them to show the same treatment to churches that they had accorded to pot shops, abortion clinics and liquor stores. The Department of Justice had earlier written to California Gov. Newsom directly challenging his unequal treatment of faith communities. In the letter, the DOJ made the now famous statement that there is “no pandemic exception to the U.S. Constitution or the Bill of Rights.”

Responding to the Trump administration’s efforts on behalf of believers of all faiths, Washington state’s Catholic bishops justified their decision to stay under wraps, saying they acted, “not out of fear, but out of our deepest respect for human life and health.” They also took rather telling pains to claim their actions were “personal rather than partisan.” In another unsettling segment of their statement, they admitted that they “hoped” their right to gather for worship would be honored soon, and they acknowledged they were waiting for the governor’s response, not taking any action to assert their religious freedoms.

The Northwest’s faith leaders contrast poorly with Minnesota, where churches courageously banded together and directly challenged their governor, making clear their intention to reopen with safety protocols. The challenge was based on equal, not special, treatment, because they noted that non-essential businesses were allowed to open with far fewer restrictions.

Across the Northwest from the onset of the crisis states, “essential” services continued with precautions, while churches were closed to all. And now as even non-essential businesses reopen with safety protocols, in Oregon, churches are restricted to 25 or fewer people per service, even in buildings with capacities up to 1,000. Within close proximity, big box stores have been allowing in hundreds of people throughout the virus crisis.

So to be clear, despite the pandering words from Washington bishops about their deep concern for safety and health, and nearly the exact same response from Oregon’s faith leaders, these decisions are not about science or about safety. That is, unless they are accusing essential workers and businesses of crass disregard for human life.

Here’s why: Respecting churches’ rights to reopen and serve their faithful is not, repeat not, the same as swinging wide open the doors. No one who cares about their communities should or would do that. Nonetheless, their right to be open is guaranteed by the Constitution. And citizens across the Northwest are rightfully appalled at how easily church leaders knuckled under to government pressure, under a transparent facade of safety concern.

Northwest faith leaders have their role exactly backwards. The governors don’t confer the right to reopen, and then church leaders figure out how to do so safely. The church leaders should long ago have demanded their first amendment right to be open, and then turned to local health authorities for good guidance on how and when to do so safely — seats at 6-foot intervals, etc. Backwards — get it, bishops?

Here in the Northwest, we’ve been spared from the high rates hitting other parts of the country. Our cases, hospitalizations and deaths have been low by comparison. The science behind the numbers also provides some reassurance for a safer path forward.

As of May 26 according to the Oregon Health Authority, people dying from COVID-19 are overwhelmingly over the age of 60, mostly 70 and above. Though nearly three-quarters of confirmed cases were in the 0 to 59 age bracket, a stunning 139 of 148 deaths were people age 60 and above. That’s 94% of the deaths. Only nine people ages 40 to 60 died. Not a single person under 40 has died. (Keep in mind that every year flu contributes to about 36,000 deaths in the U.S.)

So, given Northwest faith leaders’ unbalanced focus on safety over spirituality, here’s another tip for reopening, direct from your local big box grocers. For God’s sake, have a few separate services for these more vulnerable folks, just like “old folks Tuesday mornings” at Safeway. For the rest of the faithful — the families, the young people — open the doors. Now. And then sanitize after they leave.

And just like Safeway, if the old folks still want to show up at 11 a.m. on Sunday, even without a mask, as long as they wash their hands and stay 6 feet away from their neighbor as the CDC recommends, it is their God-given, unalienable right to take that risk.