First elected to the House of Representatives in 2014, Paul Evans has done little except to raise taxes, break the law, and cozy up to far-left extremist groups.

AFT-Oregon, a radical union group, has endorsed just a handful of politicians this election, but one of them was Paul Evans. He proudly displays their endorsement on his website. Recently, AFT-Oregon called to “disarm, defund, and ultimately abolish police forces.” 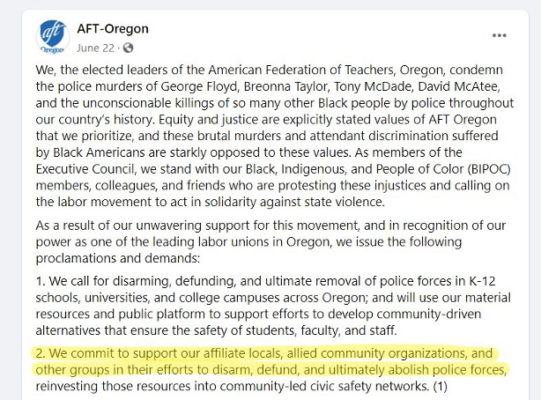 He even signed a letter with fellow radical legislators that called for law enforcement to be removed from Portland… Just a few weeks later, an innocent man was killed in cold blood.

But when it comes to being extreme, Evans is no stranger. He voted for over $3 billion in new taxes just in the last 2 years. That includes a $2.8 billion hidden sales tax which taxes diapers, tampons, soap, and prescription drugs. He even voted to tax your cell phone and jack up gas bills up to $.72/gallon and increase utility bills by 50%!

When it came time to give tax relief to Oregonians, he voted against even considering bills that would be provided a $1,000 income child tax credit to working families, given student relief on student loans, and given seniors property tax relief.

Obviously, Evans loves to pass taxes. But he can’t even seem to pay his own…

State Department of Revenue records show that he has racked up nearly $17,000 in state income tax liens.

But that’s not all when it comes to being unethical. According to Secretary of State records, has BROKEN THE LAW OVER 400 TIMES and his campaign has been fined more than $4,000 because of it.