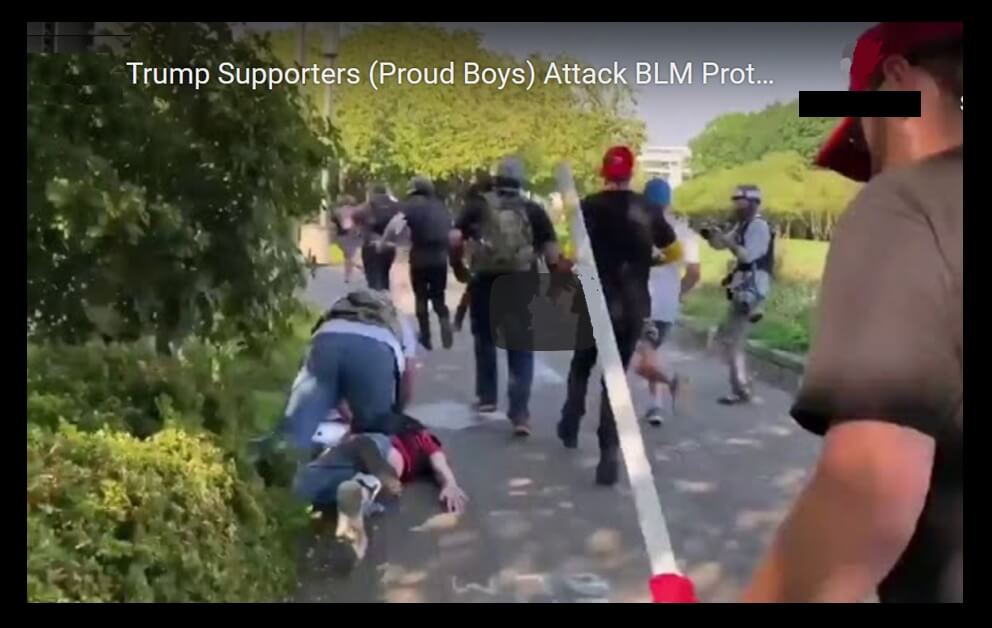 As an organization that has spent nearly 100 days exposing the violence by anarchist and Antifa with numerous articles, we break again for a moment to address violence on the right.

There have been many Trump rallies, flag waving parties and Back the Blue events in the Northwest. They’ve been peaceful, patriotic and almost invisible in the news and online.

What does make the news is when people at a Right-based event engage in violence or death threats.

At one event, KOIN-TV reports, a man with bullhorn yelled;

“I’m a God-fearing man but I think these Democratic leaders who allowed this to happen need to be shot dead in the streets,”

The quote made a front-headline news article:

You can watch the video

Here is a disturbing point.

No one in the crowd disagreed.

Additionally, people who followed the event said they did not know who the man was who made the threat — which is why it is even more important for people in the crowd to voice their disagreement.  Which is why people like our organization are voicing our disagreement. We don’t approve of such threats whether it is real or an imposter.

At the same rally, there is video of people hitting two different counter-protestors from behind and repeatedly beating one without the person fighting back.

Here is another issue that made headlines:

The Guardian made this headline in advance of the Proud Boys rally this Saturday “Revealed: pro-Trump activists plotted violence ahead of Portland rallies”

“Leaked chat logs show Portland-area pro-Trump activists planning and training for violence, sourcing arms and ammunition and even suggesting political assassinations ahead of a series of contentious rallies in the Oregon city, including one scheduled for this weekend.”

What is said in chat rooms is disturbing.  I must say that I have never seen a major news outlet expose the threats made in leftist extremest sites. In fact, PBS once did a documentary (American Divide) on American political extremism and they quote extensively from blog comments from popular conservative news outlets but never bother to quote from blog comments from comparable liberal sites.  As if select blog comments pulled from tens of thousands of comments are an accurate measure.   I explain this in detail to demonstrate how unfair things can be and how small threats can become big threats.  It makes it extremely hard to gauge what is real and what is fake.  Is The Guardian newspaper depicting the upcoming event as a Trump event accurate, when it has at its core little to do with the president or the event? Has the Guardian labeled the Antifa riots “pro-Biden” rallies?

The few Right-leaning activist who engage in violence do not represent the near million Oregon voters who voted for the President and the broader conservative and libertarian movement.

We oppose those who engage in criminal acts of people of any political affiliation.

We protect the right of free speech by people who we disagree with.

We believe in non-violence in principle and as the true winning way to societal change.

Additionally, provocation is an important issue.  I have attended the violent Portland riots as a reporter and witnessed a few times when counter protestors stand in the middle of a hostile crowd and begin shouting and taunting the crowd.   Chaos erupts.  At one point I saw a man with a baseball bat on the verge of bashing their skulls if it was not for the intervention of other protestors.  This is a nightmare for police who already are being asked to do too much.

When these acts of violence happen, people scream to me saying “This is not us! This is not us!”. This article reminds us that violence is not of us and we speak out so it doesn’t happen anymore from any political side. If you are at a rally and you see threats or you witness violence you need to act on your beliefs and oppose it and call it out. We need to oppose anarchy without resorting to anarchy. We need to support law enforcement without engaging in law breaking. We need to be aware of the few who do and oppose it.