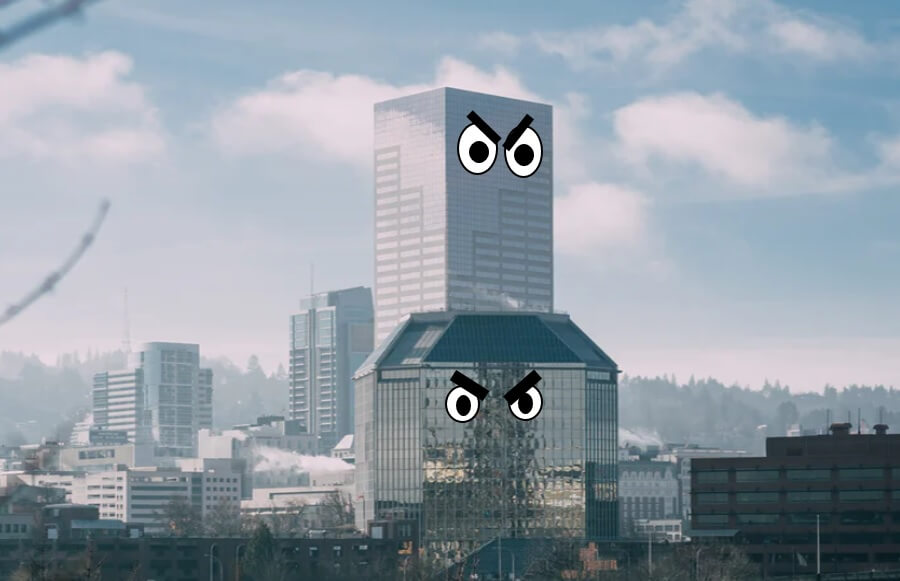 The Tyranny of the Majority
By Bridget Barton
This article provided by Oregon Transformation Newsletter.

These places are always imagined to be completely overrun with people until you actually visit and see the amazing disparity between urban and rural areas. The same is true in Oregon, where Portland’s population density is 5,000 people per square mile, and yet the rest of the state is a scanty 40 people per square mile.

When cities have such dominance in vote counts over their rural neighbors, it’s not surprising that the tyranny of the majority begins to take hold. This was the wisdom of the founders in creating a republic rather than an actual one-person one-vote democracy, and it is the wisdom of the Electoral College in providing large geographical areas some degree of power and voice. Unfortunately, no such wisdom protects us in our state governments. Yet. Ideas anyone?

Think of the state of Oregon as a target. Portland is the dense red – okay, blue – bull’s-eye. The rest of the state is much larger and a completely different color. Is it right for the majority to force their views on the minority? Do they know better? Is their lifestyle more correct? Should we all be densely packed like them? Are they just smarter than all the other Oregonians?

In 2020, two far-reaching policy choices of these urban bullies surprised them with devastating consequences.

The first was their transportation dream of forcing everyone onto public transit, cramming people onto light rail trains – from the city out into every suburb. Whether they wanted the trains or not, and they definitely did not. Light rail was repeatedly voted down by citizens outside of the Portland core. But that didn’t stop them from building the trains and scuttling smaller, more direct bus lines.

Light rail was not a success before COVID-19. Ridership numbers never met their urban goals and dreams, and had been steadily dropping. But after COVID-19, public transportation is in free fall. “Scientists” have been clear that public transit is a hotbed for viral transmission. From day one, Multnomah County/Portland had the state’s highest COVID rates. What a tragedy; what a consequence.

​And all the additional carbon emissions from constant, congested traffic is a direct consequence of spending no money on roads, and all of Oregon’s transit dollars on empty light rail virus trains.

But does that stop the transit bullies? Not at all. After all the losses, all the tragedy, all the financial devastation, and even all the scientific data about public transit, Metro is still bulldozing forward with Measure 26-18, a roughly $5 billion plan that will fund more light rail into the Southwest suburbs. Good luck to the urban bullies when they try to get people to ride the virus trains in the future. COVID-19 isn’t the only thing you risk on public transit, and the public knows it.

If urbanites want to ride virus trains, who are the rest of Oregonians to stop them? But pushing forward with a tax increase on their neighbors to fund these trains in the midst of the pandemic takes bullying to an all new low. And, given the population density demographics, unless the rest of the Metro population unites against this measure, Portland could get their way again.

The second policy dream was preserving the forests. Squeezed together in their downtown condos, urban progressives dreamed of never-changing forests as their personal playgrounds. Urban bullies spent millions of dollars funding advocates and lawyers to preserve their favorite hiking spots.

Almost 40 years ago, the NW Forest Plan began the steady demise of timber cutting on Oregon’s federal forests, with state forests following the same downward cycle. Harvest levels never came close to meeting the plan’s promised output. According to the Western Wood Products Association, in the 1970s there were nearly 1,000 mills across the western United States. By 2010, the number was down to less than 200. And in Oregon the number of mills is now down to fewer than 150.

Listen up, urbanites. What do you think those millworkers were doing besides earning a decent living, supporting their families, funding their roads, safety, and schools, and living happy lives?

The urban bullies knew better though. They shuttered the mills and “preserved” the forests. And this year, their overcrowded, under-harvested, badly managed forests and hiking trails burned. What a tragedy; what a consequence. Millions of tons of carbon burned and belched into the air over the entire West. This time, even the urban bullies had to breathe the acrid ashes of their decisions. Sadly, so did the rest of Oregon.

So, how do bullies react when their policies bite them back? As you might expect, not with clear-eyed evaluation or any sense of responsibility. Typically, they blame the victim and double down on their bad policy.

It’s climate change, they say; it’s not that they grossly mismanaged the forests and destroyed a well-functioning system to manage one of Oregon’s best, fastest growing resources while at the same time sequestering the carbon they claim to be concerned about. Really, how can urbanites even talk about climate change when they bear so much blame for the fires that continue to emit millions of tons of carbon?

And now Sen. Wyden, New York/Oregon, and Sen. Cory Booker, New Jersey, have proposed the idea of a Civilian Conservation Corps to manage the forests. There’s a great idea, senators – let’s have the taxpayers pony up all the money for what private enterprise used to do more effectively without any help from government. And here’s a question for the senators: How do they propose to create or, heaven protect us, fund a program to manage the forests without the more than 80,000 middle class Oregonians who used to do this job, the supporting communities that no longer exist, or the nearly 400 mills that have closed forever? Because that’s what it takes to process all the carbon out of our forests every year if we don’t want more devastating fires.

Maybe it’s time to consider adapting our state government to the reality of the increasing rural-urban divide. The tyranny of the majority isn’t working well – even for them. And answers to the difficult questions ahead will not be correctly or effectively answered by senators from the East Coast or Metro councilors from downtown Portland.