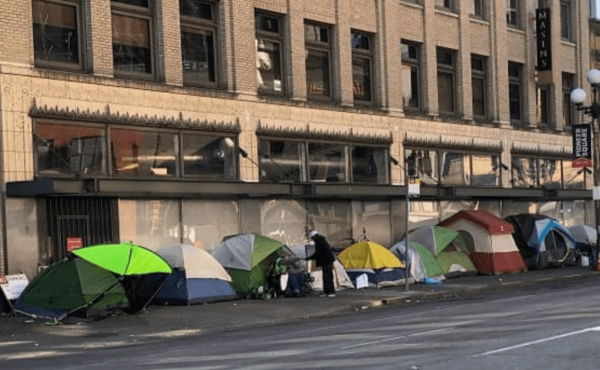 “You get what you pay for.” We’ve all heard the saying and, for the most part, it’s true. One place it’s not true is with Metro’s plan to address homelessness in the Portland region. Under Metro’s plan, the regional government’s motto will be, “The more we spend, the worse it gets.”

Metro’s Supportive Housing Services measure was cooked up by a group of nonprofits who called themselves the HereTogether coalition. This unelected organization put together a mish-mash of vague aspirations and combined it with a convoluted process to distribute funds and deliver services. (No points for guessing who would ultimately get those funds.) Metro Council rubber stamped the plan and sent it to the voters who approved it by a fairly wide margin.

Last February, Metro Councilor Shirley Craddick asked, “How will we measure success? What will the voters see that’s different today than it will be in five years?” No one answered her question then. The question remains unanswered today.

Earlier this year, an Oregonian editorial criticized Metro’s lack of “vision” in implementing its homeless services measure (“Metro lacks vision for homeless services measure,” Feb. 21). In particular, the editors asked what the measure will achieve or what “success” will look like. Still no answer. This should not be a surprise, though. Metro never had a vision for the plan. It doesn’t want any measures of success, because then everyone will know how badly it failed.

Last week, in an interview with Willamette Week, Multnomah County Commissioner Sharon Meieran ripped off the mask, admitting they “don’t have a plan or even a kernel of a plan” for spending billions of taxpayer dollars to get unsheltered residents into stable housing.

It’s not that hard.

The region’s homelessness policies should have one overarching goal: a significant reduction in the number of unsheltered homeless. That’s it. Every plan, every program, every dollar should be targeted at getting the unsheltered off the streets, out of the parks, and into shelter.

For the community at large, the unsheltered population is their biggest concern. These are the people sleeping on the streets, in parks, in tents, in cars, or in abandoned buildings. While a majority of Portland-area voters have compassion for the homeless, they also want an end to overnight camping. Getting the unsheltered indoors will improve the quality of life for them and the community.

Despite the obvious crisis of thousands of unsheltered people, Multnomah County has declared that providing services for the unsheltered is “not the long-term priority focus” of the county and Metro’s homeless plans. How could these people get it so wrong?

For more than two decades, a “Housing First” approach has been heralded as the best solution to homelessness. The approach has two components: first provide permanent, affordable housing for those experiencing homelessness, and then provide a wide-range of supportive services to help them maintain their housing. These services can include treatment for medical and health care issues as well as mental health and substance use. Metro’s plan goes even further. Their plan includes rent assistance for people who already have housing, job training, tenant advocacy — even classes on how to sue your landlord.

But, Housing First projects take years to build, and construction costs per unit are more than double private sector costs. The most recent project approved using Metro’s housing bond money will cost more than $355,000 per unit to build. Housing First’s “wrap-around” services are expensive and require individuals to have both the ability and intent to fully use them. Even worse, there is no evidence that the Housing First approach is effective at reducing the total number of unsheltered people in a community.

Supporters of Metro’s approach claim the plan is a long-term solution to homelessness in the region. It’s not. In a comprehensive study of three best-in-class Housing First sites, researchers found fewer than half of participants remained in housing for the first 12 months, while 41% were “intermittent stayers” who left and returned, and 16% abandoned the program or died within the first year. If the best programs produce such dismal results, it is most likely that the “Gang Who Can’t Shoot Straight” at Metro will produce even worse outcomes.

But there is a way to provide immediate shelter to thousands of people on the streets.

Metro owns and operates the Portland Expo Center, a 330,000-square-foot exposition center sitting on 53 acres. The facility has meeting rooms, a full-service kitchen, a restaurant, and flexible outdoor exhibit space. The Expo Center has been losing money for years and needs significant capital upgrades to compete in the exposition market. This year, it’s expected to lose more than $1 million, and that’s just from operations.

The exhibition space alone could serve 2,000 to 3,000 individuals. Its 2,500-vehicle parking lot provides ample space for individuals who prefer to camp or sleep in vehicles. It has easy access to public transit — the TriMet Yellow Line terminates at the front of the Expo Center and provides frequent service to downtown Portland.

Because the pandemic effectively closed the Expo Center, Metro can reallocate money from its homeless services measure to rapidly reopen the Expo Center as an emergency homeless shelter. Repurposing the existing facility would be much less expensive than the region’s current “affordable housing” construction projects. This is a better use of funds than Metro’s visionless, complex, and time-wasting process of filtering funds through counties down to service providers.

Converting the Expo Center could bring immediate relief to thousands of homeless individuals and families while providing a much better return on investment than current plans to remodel the site for low-attendance expositions. Rather than waiting for counties to brainstorm their own homeless services programs, Metro should flex its regional government muscles and put the Expo Center to work.

Eric Fruits, Ph.D. is Vice President of Research at Cascade Policy Institute. He recently co-authored a report on homelessness in the Portland region. The report is available on the Cascade Policy website. This post was originally published in the April 2021 “Oregon Transformation” newsletter.