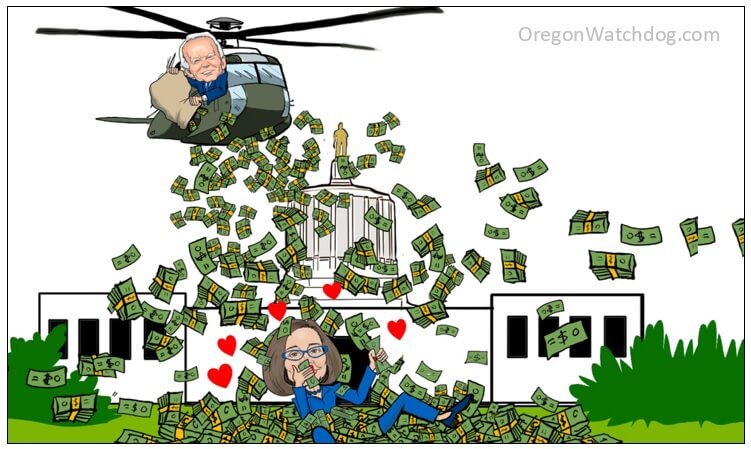 Under President Biden’s Rescue America Act, Oregon State and local governments will be receiving $4.3 billion in federal dollars. In fact, so much money is pouring into the state’s coffers that the Senate President and House Speaker sent a letter to all senators and representatives asking them how they should spend it!
That is right, so much tax money our leaders do not even know how to spend it all.

Some of your federal stimulus payments are taxable under Oregon law. It will take a bill passed by the legislature to stop this. This is why the Taxpayers Association has testified in favor of, and is pushing SB 842, the Stimulus Protection Check Protection Act, to make your stimulus funds tax-free.

The Employment Department reports that the largest gain in median wages during the pandemic was the local government sector at $3.23 hour gain in salary. Compare that to three other industries (transportation, utilities, warehouse) which only saw a 20-cent gain in hourly wages. Furthermore, why is government giving raises to itself when 120,000 Oregonians are still out-of-work – they are the ones who pay the taxes.

HB 2921 would establish a six-to-one small-dollar contribution matching program for political candidates in Oregon. This means your hard-earned income taxes may be funding, say, a candidate’s first-class plane trips, mudslinging ads and lavish cocktail fundraising parties. The U.S. House of Representatives has already passed, HR1, which would give $6 of federal government money for every $1 a political candidate raises. It is estimated that politicians could collect up to a billion dollars in campaign matching funds within the next four years alone if HR. 1 passed.