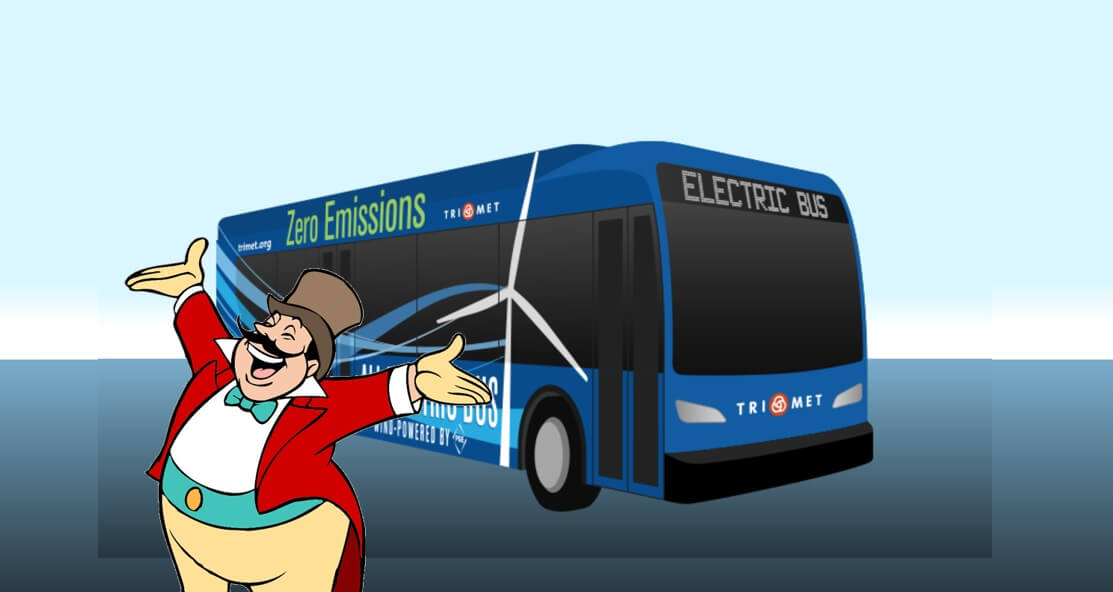 The Portland metro area’s government-run transit agency is failing but it plans to spend a lot of your money on the way down the toilet.

Per capita transit ridership has dropped for several decades despite the billions of dollars invested in boondoggles like light rail.

But those so-called “investments” DO provide a nice opportunity for politicians to hold press conferences to get their smiling mugs on TV and their voices on radio.

Trimet holds one of those reporter dog-n-pony shows this week.

The agency plans to brag to reporters about its shiny new battery-powered bus.

Let me remind you of a few facts about that bus. My source for the numbers is Trimet itself, if you want to question their accuracy.

The battery bus costs twice as much as a brand new bus. Half a million for a clean diesel bus, one million plus for the battery version.

It’s fuel and maintenance is a bit cheaper. Using electricity saves a few thousand bucks a year. But if you do the math it would take more than 250 years for the savings to make up for that extra half million dollars.

Now we know that a city bus ain’t going to roll down the road for a quarter of a millennia but it’s actually worse than that. The cheaper diesel bus lasts about 16 years in transit service. The battery bus, only 12.

And then there’s the matter of batteries that have to be replaced.

The good news for Trimet…they don’t have to care about the extra cost because someone else paid for it. The bad news for YOU, is that “someone else” is your local utility company, PGE, which means YOU paid for the spendy battery bus in your electric bill.

As for clean and green and saving the earth…27 percent of the electricity in this region comes from coal. Like a lot of things on the “green” agenda, the numbers don’t add up…but politicians will get their TV moments and most of the media will carry water for them by not asking too many hard questions.