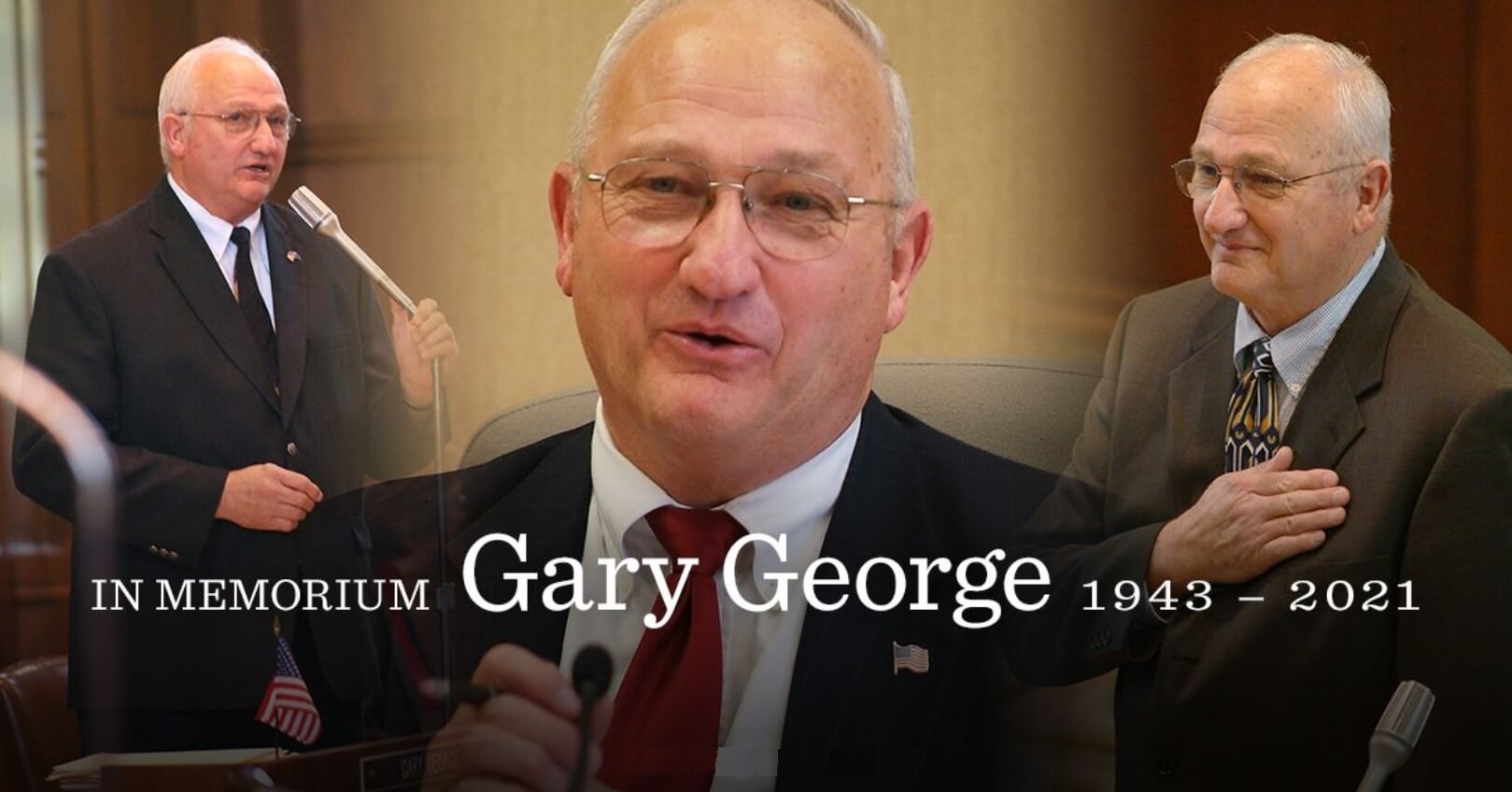 Former State Senator Gary George passed away this weekend, Memorial services are being planned for next week.

Former State Senator Gary George was one of the best lawmakers of our generation. He changed the face of Oregon schools by helping to advance charter schools which helped an entire population of under-served kids, minorities and poor students achieve success.     His ideas helped transform entire agencies (see below) and were often ahead of its time.

Gary George did things no other Senator would do. For instance, when a government health board came forward to jack up occupational license fee costs the government lobby would justify it by saying “Don’t worry, everyone wants it”.  Gary would challenge such lies by taking time to call license holders and ask them himself only to find them outraged at the idea. Such fee increases died immediately. 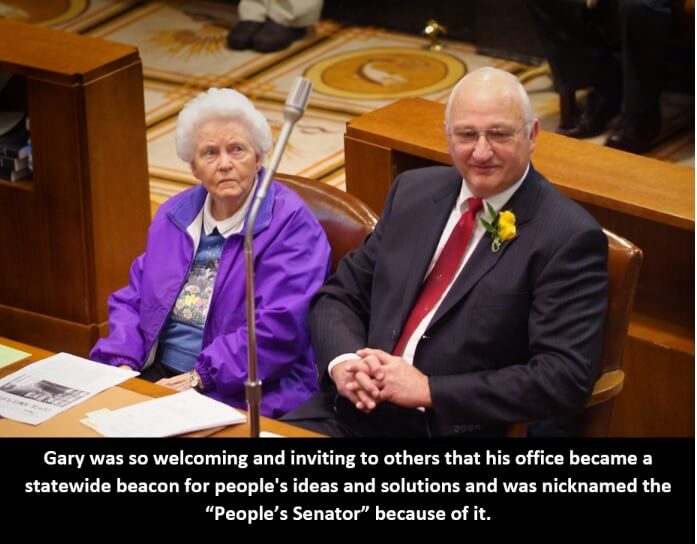 Here are some tributes:

“Senator George put people before politics as he stood up against his own party when they considered going against the voters and his constituents.  George spoke out against his own Republican caucus when they planned to raid the people’s kicker funds and to “pack” a budget committee by adding a big spending liberal senator to the post during the end session.  Senator George was ousted from his chairmanship and his committee shut-down.  This was a repeat of 1999, when George went up against his Republican leadership because he opposed the gas tax that voters later rejected so heavily.   Senator George was one of the most principled legislators to ever enter the Oregon Capitol. “ 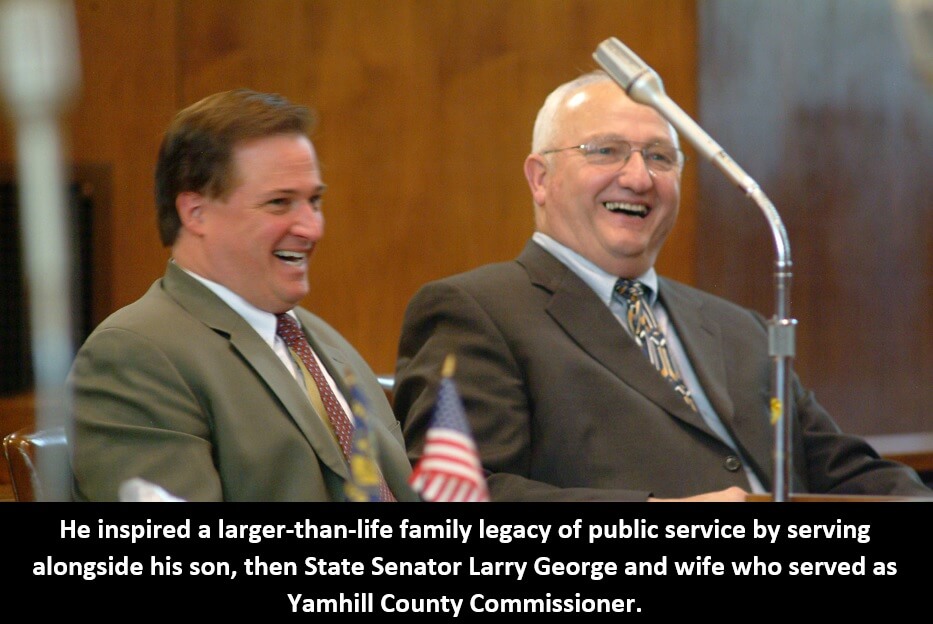 “On many occasions he [Republican] and I [Democrat] were able to find common ground, even if it took a great deal of discussion.  He was open to outside opinion and shunned group-think.  That can be a dangerous thing for a politician, but not for a statesman.  Finding the truth was more important than political ideology.  We did bridge our divide one evening while filming a set of commercials.  Between takes with little to do he challenged me to an arm-wrestling competition, figuring the brute Republican would humiliate the wimpy Democrat.  I made him work really hard, for an extended time, before he ultimately prevailed.  That look on his face of, man, did I ever have to work hard for that one, will always be with me.  Makes me laugh every time I think of it.  I warned him, never take a scrappy Democrat for granted.” 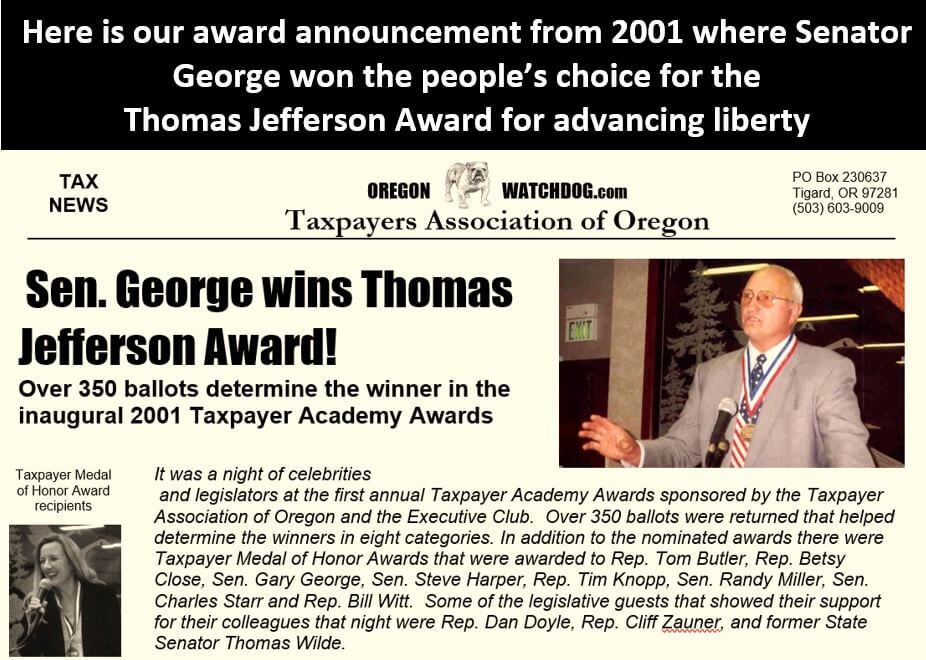 “But one particular meeting changed my life professionally and personally. I was complaining to him about how our board of examiners was potentially doing “random audits” of our chiropractic physicians. He said that’s not good and that you have to come tell your story in Salem”. I had no idea what that meant. He said you essentially become a citizen lobbyist. It unleashed a little of a “political storm” for our profession and eventually the problem was solved. And it was time well spent in my career. I met and became friends with some phenomenal legislators I never would have met otherwise…”
Dr. George Siegfried, D.C.
Chiropractic Physician 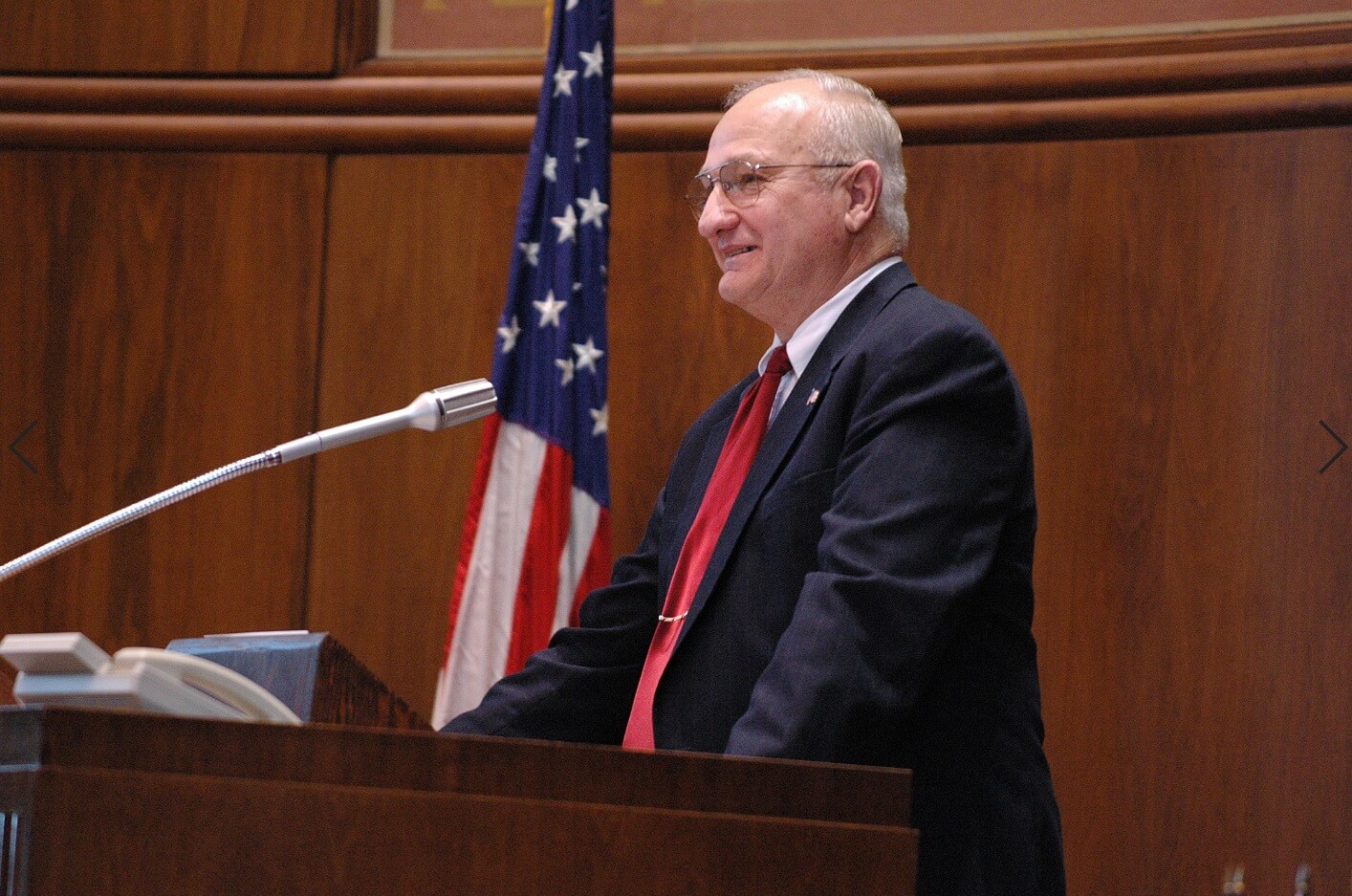 “Gary George has always been a great friend for Oregon property owners.  During his time in the Capitol, there was no one we could count on more to defend property rights and stick up for the little guy then Gary.  When we needed someone who could make our argument in the caucus room or on the Senate floor, we asked Gary.  When we needed someone to introduce a bill on short notice, we asked Gary.”

Defender of the Second Amendment

“Gary George was a hero to the Second Amendment.  He is the only member I ever knew to get direct national recognition by the NRA by winning one of their national awards.   The award came with a massive oil painting. One day when trying to get us to better understand what an assault rifle was, Gary George surprised everyone by actually bringing one in a big paper bag to a Caucus meeting in the State Capitol.  Everyone’s jaws dropped.  Gary’s illustration moment worked perfectly because it gave us a chance to see and touch for ourselves what the debate was about.  It was this type of creative illustrations that Gary was famous for.”
Ted Ferrioli
Former Minority Leader of the Oregon Senate 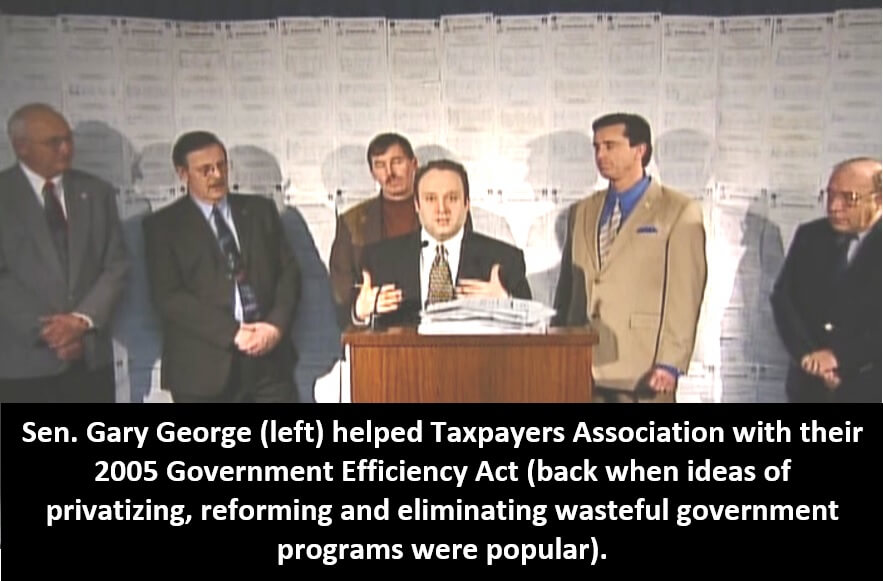 “Gary George was among the early leaders to expose the ODOT scandal of how many thousands of engineers they employed.  There were so many engineers it was like ODOT having one engineer for every 8 miles of road. Gary helped innovate the ODOT agency by getting them to experiment with their first design-build project by letting more outside contractors work on the project.  I saw it happen in my own district where the first design-build project by ODOT resulted in a project being completed early and under-budget.”

Fighting for accountability down  to the penny

“Gary George wanted to know where every single dollar was being spent and refused to take “no” for an answer. Once he got his answer, he would tell me to put together graphs so that everyday people could more quickly understand.”
Mark Bigger
Attorney
Former Legislative staff

“Gary was the only lawmaker I knew who could stand up to Kate Brown back when she was Senate Majority Leader.  Senator Gary George also always helped the little guy.  He helped small candidates like mine by showing up to pound lawn signs all day, and he did so for all the small local candidates he believed in.  He was never self-centered”

An inspiration to local leaders

“I’ve known Senator Gary George for many years and have always been impressed by his rock solid commitment to telling the truth regardless of the politics at play. Senator George’s constituents were always his first priority. Throughout the years he’s been a sounding board for me and a reliable friend who’s always ready to share his experience and his perspective.”

“Senator George has been the most effective taxpayer watchdog in the Oregon Senate.  He has saved taxpayers millions”

“Senator George has been a true leader in reforming Oregon’s education system.  His effective leadership was vital in passing Oregon’s charter school bill and he continues to demand accountability on behalf of Oregon parents and students”

Please add your tribute below