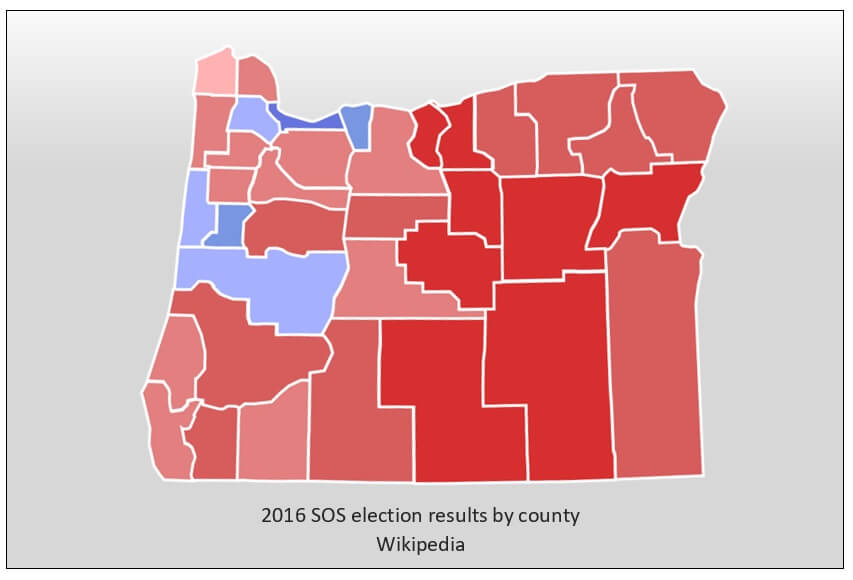 Right now many Blue states (Connecticut, Vermont, District of Columbia) are cutting taxes during the pandemic. Not Oregon, our state is about to raise $50 million in new taxes on small family-owned businesses as SB 139 makes it way through the Legislature. As a small business owner I am alarmed.

Small businesses already furious over having to be locked down longer than 40 other states, will be even more outraged when they get their 17% tax increase bill.

SB 139A passed the Senate by a single vote, with the two most politically vulnerable Democrats voting no. The bill has stalled in the House. I think the Democrats are waking up to the fact that this small business tax could be the issue that drives voters to throw-the-bums-out and cost Democrats to lose their super-majority. There are currently 15 House Democrats who hold seats that were won by former Secretary of State Dennis Richardson in 2016, so logically every one of those seats would be in play in a year like 2022 (See 2016 county chart results above). With new legislative districts under redistricting for 2022, this could get wild in the Oregon House.

How are Democrats going to explain this bill? They can’t say they need the money because they have record breaking tax revenue and billions in Congressional relief funds flooding state coffers.

These lawmakers are walking the plank for the sake of the tax bill’s author Senator Ginny Burdick who won’t be around to suffer the consequences of her bill as she is leaving the Senate for a $142,000 a year state job that was harshly criticized by the local media.

This carefree attitude is also why Senator Burdick’s committee voted to approve SB 727-a which gives very rich Oregonians a “work-around” tax credit loop-hole to avoid paying federal taxes. Both SB 139A and SB 727A were passed on the very same day. A 17% tax increase on family owned business while giving a huge tax break to Oregon’s wealthiest. Seriously…..you cannot make this up!

If these two bills appear to be the most completely politically tone-deaf set of bills in the past decade…you would be correct.

But outside of Senator Burdick adding fuel to the public’s cynicism toward career politicians, SB 139A is just horrible public policy, especially in the current environment. Raising taxes rates on some of the smallest businesses. Why? How? If your business is a under severe stress, a new start-up, or you are just trying to recover from the pandemic you may not have as many employees as you did before.

Under a complex matrix, SB 139A says that you must employee a certain number of non-owner employees, or your tax rate goes up over 20%. So either hire back your employees today, or we will punish you with massively higher tax rates! So many may just choose to close.

Republicans have an opportunity to not only to make big gains but recruit an army of new candidates from the small business community for 2022 which will likely be a referendum on this small business tax. We will see what happens.