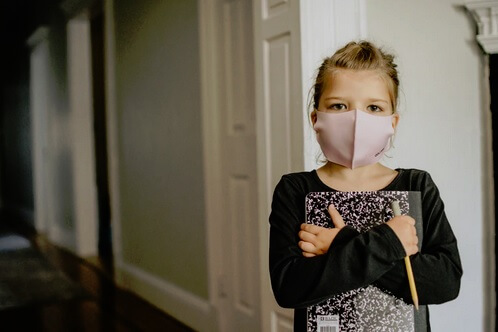 Students and staff in Oregon schools must wear masks indoors when they return to school, according to a decree issued by Oregon Gov. Kate Brown that has sharply divided communities and prompted protests by parents.

Local school superintendents advocating for local control of such decisions begged parents to direct their anger where it belonged—at the state rather than local officials.

After Brown issued the order to curb the sharp rise in COVID-19 cases, spurred by the Delta variant, a thousand mothers in Southern Oregon created the Oregon Moms’ Union to protest the mask mandate, and they’re threatening to pull their students from public schools.

Taryne Saunders, a mother of four students in Medford schools, said wearing masks creates depression and anxiety in children who can’t even see the faces of their friends and teachers, according to KTVL.com. Mothers said masks confuse their brains, lead to an inability to concentrate, and create respiratory buildup issues. Saunders contended suicide rates have increased and noted that COVID is no worse than the flu—although a 2020 British study of hospitalized patients found COVID-19 patients are five times more likely to die than those suffering from the flu.

But Medford School District Superintendent Bret Champion, who had surveyed 5,000 parents and teachers to develop local guidelines about masks and discovered 70 percent wanted masks to be optional, said defying the mandate would force educators to spend time investigating complaints to the Oregon Occupational Safety and Health Administration rather than teaching children. Last year the district investigated more than 60 OSHA complaints.

Like other superintendents across the state, he is asking the state Department of Education to let district officials decide about masks.
He asked parents to direct their frustration at the governor rather than local school faculty.

In Bend, parents and teachers were divided on the decision to require masks, as some saw it as a way to protect both students and faculty while others noted the importance of showing faces and emotions to students in a learning environment, according to KTVZ.com.

School officials throughout the state expressed shock and disappointment over the governor’s mandate, complaining about the state wresting control from local officials, according to Oregon Public Broadcasting.

Estacada Superintendent Ryan Carpenter said parents, teachers, support staff, and community members have asked him to ignore the mask mandate, but he said the district won’t violate state orders. However, he urged them to lobby state officials.