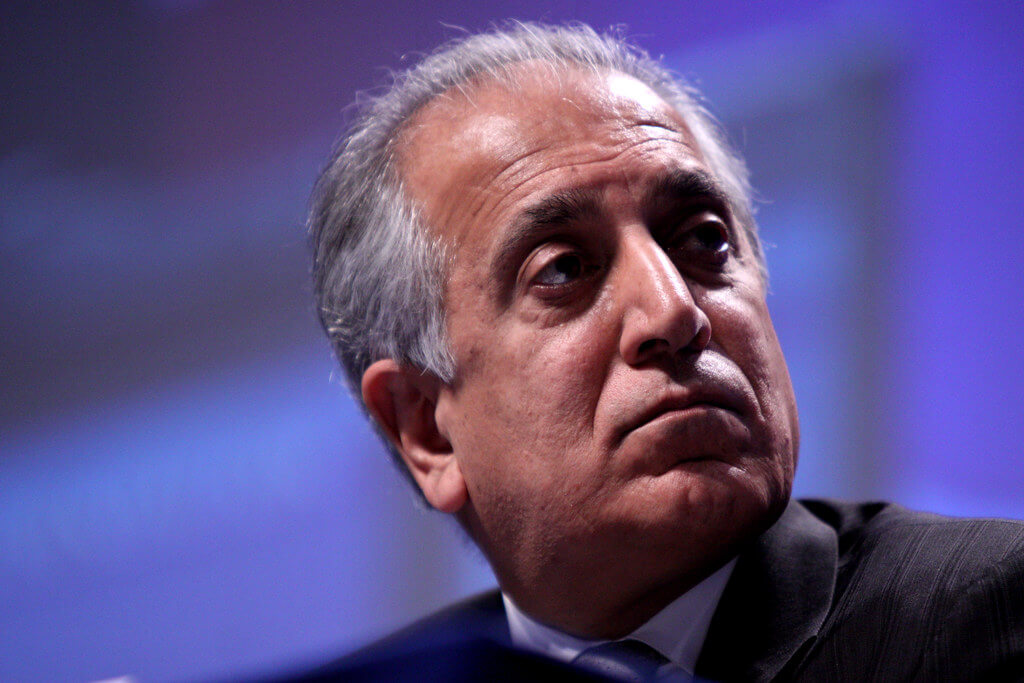 In January 2008, the Washington Post wrote about a rumor that the then U.S. Ambassador to the United Nations, Zalmay Khalilzad, was considering a run for the presidency of Afghanistan. Having already served in the Bush administration as the U.S. Ambassador to both Afghanistan and Iraq, Khalilzad was as American as apple baklava, but he was born in Afghanistan, as Steve Coll writes in Directorate S:

Khalilzad had been born and raised in Afghanistan before earning a doctoral degree in political science at the University of Chicago. He had served in previous Republican administrations and had become, after September 11, the most influential adviser on Afghanistan who enjoyed direct access to President Bush. He was a self-invented man, gifted and adaptable, a natural Washington operator—a phone juggler, a network builder, disorganized, charismatic. He was tall, clean-shaven, with a head of receding graying hair. His manner was all smiles and shoulder grabs. He had the sort of Oval Office style George W. Bush enjoyed—jocular but respectful, quick with a story or an insider’s detail about a foreign leader. He also offered something no other White House adviser could. He had deep, personal knowledge of Afghanistan.

By the end of the Bush administration, British intelligence began picking up strange conversations:

It was in late 2008, as Zalmay Khalilzad served as the expiring Bush administration’s ambassador to the United Nations, that G.C.H.Q., the British eavesdropping agency, first began to document calls Khalilzad was making to warlords and politicians around Afghanistan. Khalilzad was sizing up who might be interested in running for president in the summer of 2009, besides Karzai. It seemed unmistakable from the intercept transcripts that the former American ambassador to Kabul was exploring whether to run himself.

As an intelligence matter, it was an awkward situation. Under U.S. law, the National Security Agency was not supposed to seek out or report on the communications of “U.S. persons,” meaning citizens or permanent residents, unless there was specific evidence of the person’s connection to terrorism, espionage, or the like. The British were under no such restrictions. To defer to U.S. rules, however, when Britain shared intercepts involving Americans, the reports would typically leave out the overheard person’s name, substituting “[U.S. Person]” instead. In this case, however, it was obvious from the context of the intercepts that the speaker was a high-ranking American diplomat based in New York with rich connections in Afghanistan. Just about everyone with access to such compartmented intelligence who was following Afghanistan knew Zalmay Khalilzad personally or by reputation. They could readily guess that he might be exploring a presidential run. If the United States wanted to dump Karzai and install a successor more firmly allied with American priorities, why not choose Khalilzad, who had already served successfully as a kind of viceroy in Kabul between 2003 and 2005?

Karzai knew, too, about Khalilzad’s telephone conversations. Many of the ministers and aides with whom Khalilzad spoke reported to the president about them, to protect themselves from allegations of treachery. When confronted privately, Khalilzad insisted that his probes were being misunderstood. He wasn’t going to run. He had become an informal counselor to Doug Lute at the National Security Council. Khalilzad’s exclusive back-channel reporting during visits to Kabul and over the telephone about who was in or out of the presidential sweepstakes provided unique insight to the White House. Even so, it was quite possible, many who knew Zal agreed, that the purpose of his calls was not just to feed the White House timely analysis but also to try to decide whether to throw his hat in.

“Watching Khalilzad,” as a headline in a cable from the U.S. embassy in Kabul that spring put it, became an awkward subdivision of the intrigue surrounding Karzai’s reelection bid. “Despite former U.S. Ambassador Zalmay Khalilzad’s statements that he will not run, his activities and those of his supporters are watched carefully by the political class” in Afghanistan, the cable noted. While meeting with Afghan political figures, Khalilzad seemed to be trying “to persuade opposition figures to withdraw their candidacy to unite behind one candidate” to take on Karzai. Who did Khalilzad have in mind? He did not say.

He was such an operator, had such a transparent love of political games, that he did not necessarily require a master plan—it would be enough to be in the mix, talking and playing the politics forward, to see where it all led. Karzai, for his part, believed that such a well-known representative of the United States would never consider running for president in Afghanistan without at least the tacit support of the U.S. leadership.

This didn’t get much press coverage at the time or since, which is remarkable given how bizarre and dysfunctional such a possibility implies. When I read that passage in Coll’s book I was blown away. Khalilzad published a memoir two years before and the former ambassador included no discussion on this topic, no admission, no denial.

I don’t know what to make of it. The whole matter could be a mere misunderstanding, but no doubt this was devastating to U.S. policy in Afghanistan, permanently poisoning our relationship with Hamid Karzai who would win reelection in 2009 and serve out a bitter last term until 2014. That hostile relationship may have made victory in Afghanistan impossible more than a decade ago. True or false, Khalilzad’s behavior did more to defeat U.S. counterinsurgency efforts than Taliban prowess on the battlefield.