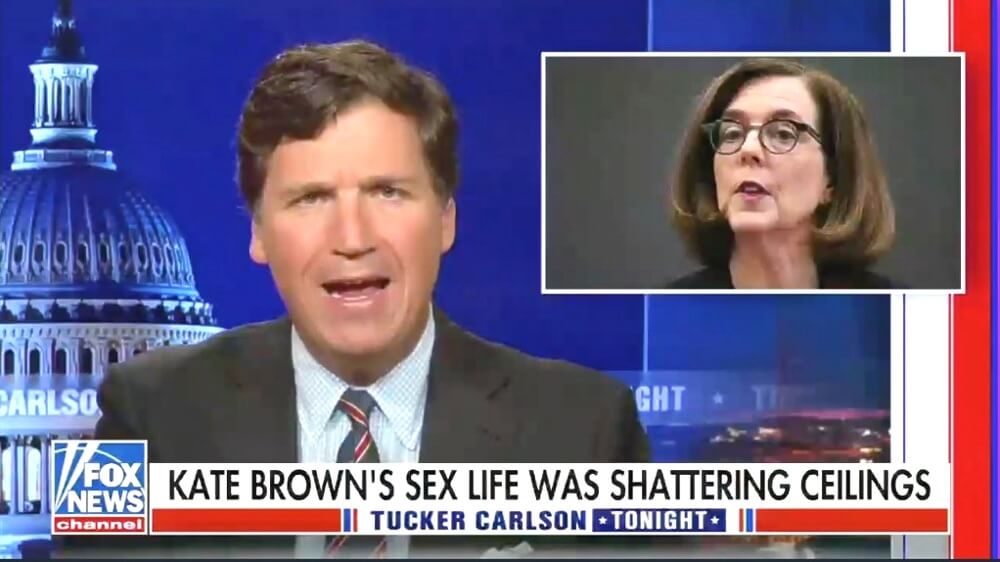 We interrupt our usual criticism of Governor Brown’s actions to bring you this different message,

Last week, national Fox News host, Tucker Carlson, began his show by going after Governor Kate Brown’s bisexuality and using it as a way to discredit her on her latest rules requiring mask mandates for outdoor events.  Carlson basically stated that Governor Brown can’t be bisexual because she eventually married a man and therefore she is a liar.  It made no sense.  It was unfair, unwarranted.  It has nothing to do with what Governor Brown said or did recently or on the pandemic.  Maybe this is why this Tucker opening segment appears to have been taken down from Fox News compared to the other daily Tucker opening segments.

So instead of talking about Oregon’s only-existing-mask-rule-in-the-nation we are having a public debate about bisexuality.  This is just like Oregon’s debate over election fraud that was steered off track at a rally when people began burning Kate Brown in effigy.  Hmmm…..conservatives borrowing the barbaric street protest tactics from Iran and ISIS and using them to win the hearts and minds of Oregonians?  Never underestimate the ability of conservatives to lose an argument through overkill.

Going after elected leader’s personal lives to score unrelated political arguments can be dangerous ground. Think about how Trump’s niece recorded 15 hours of private phone conversations with various family members in order to use their words against Trump.   Many may not remember the story because not much was actually revealed in the phone conversations, but that didn’t stop the media from desperately trying to make it one.

We should be careful about using people’s personal private lives as a tool to score unrelated political points.