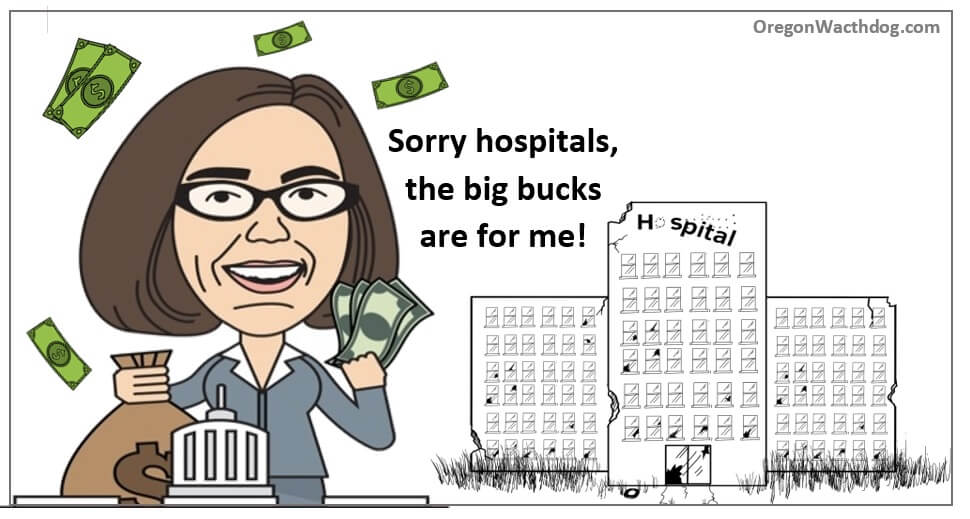 Oregon has been rated as the nation’s worst hospital capacity per capita with its staffing shortage crisis as a leading culprit.  While patients are dying waiting in line, Oregon governor Brown has approved nearly $200 million bonus for government staff.  This does not include the up to $1,500 bonus for those government employees who worked during the pandemic. It is called hazard pay but it is not known whether hazard pay applies to all the government employees who worked in their offices that were closed to the public — and still are closed to the public.

– Governor Brown passed a hospital tax in 2019. This tax cuts hospital staff while directing the money to fund bigger government.

– Oregon actively blocks the creation of new hospitals with their bureaucratic “certificate of need” law. This law blocks hospitals from being created base don need, but rather upon government approval along with input from rival hospitals. Most states do not have this law, while California of all places repealed theirs. Our Oregon patients are facing less help because government bureaucrats for decades blocked the creation of new hospital capacity.

– During the staffing shortage Oregon actively blocks nurses from coming in from other states because Oregon refuses to participate in the Nurse Licensure Compact used in other states. The compact allows quick sharing of nurses between states — a flexible tool for pandemics. Not in Oregon. Nurses union correct barriers to block nurses from coming in from other states in order to block competition.  Unions pass laws to protect their raises over protecting patients. Are people dying because of this law?

Our government employees seem to be faring well because 3,500 Oregon workers make more than the governor.

Throughout this crisis the Governor has placed the blame on the public.  Yet, there is no governor in the nation that doesn’t wish their vaccination rates were higher. According to the NY Times Oregon is the 11th most vaccinated state.  Our chief problem is that Oregon rates as the nation’s worst hospitalization rate.   Why has not more of the $4 billion in federal Covid funds gone to expanding hospital capacity?  The Taxpayer Association of Oregon has been sounding the alarm on hospitalization throughout the pandemic.

Sending out the National Guard has been helpful but not enough.  We need to invest current Covid dollars, not on millions for art museums, but rather towards hospitals and then remove laws that make Oregon a hospital understaffed crisis.

— Please, please, please send this article to the people you know.  Every Oregon needs to know about this hospitalization scandal that Governor Brown and her liberal politicians have created.