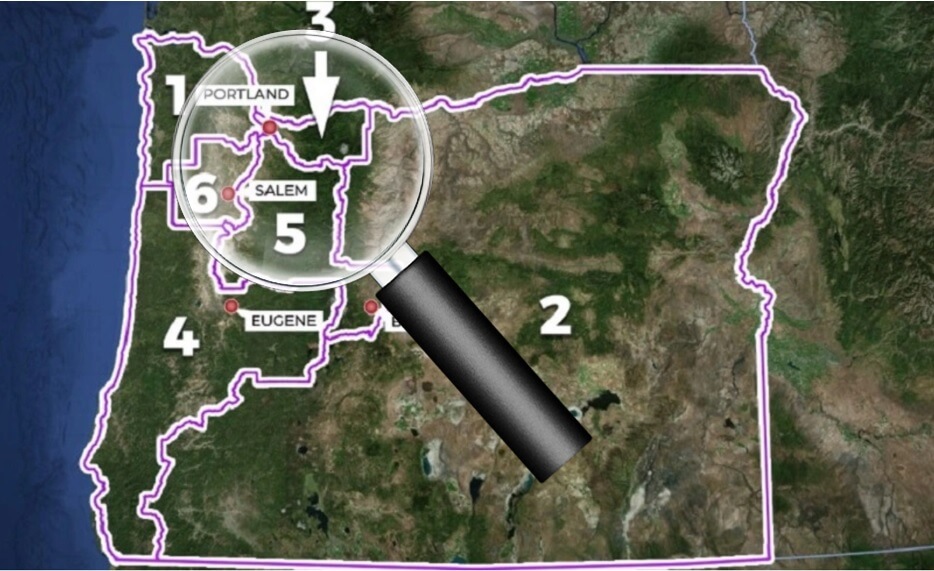 The great thing about conventional wisdom is that it is usually wrong. In this case, conventional wisdom says that Oregon Republicans have been screwed by the Democrats on the new congressional district lines drawn and approved by the legislature this week. But that static thinking assumes a static electorate. And the electorate for 2022 is anything but static. President Biden has already dropped 10 approval points in the last two months. With his cognitive abilities clearly in decline, it is difficult to believe his numbers will move north, not farther south.

Politico nicely summed up the conventional thinking: “Oregon became the first state to redraw the congressional map for the next decade – passing a plan that creates four Democratic districts, a safe Republican seat, and one potential battleground seat.”

It is true that before House Speaker Tina Kotek and the Democrats decided to draw the lines in a somewhat mildly sane fashion, their first draft looked like something out of gerrymandered hell. Her new congressional districts grabbed slices of Multnomah County voters to tilt them all dark blue. Kotek’s first draft was conceived after breaking her word to House Republican leader Christine Drazan that the new lines would be drafted equally by both Republicans and Democrats.

But thank the Oregonian’s Helen Jung for coming to the rescue and giving Speaker Kotek the “editorial” smack upside the head she deserved.

Wrote Jung, “Kotek’s handling of redistricting should be a significant factor in any Oregonian’s analysis of whether to support the longtime legislator in her bid to be governor. Her decision to go back on her word to Republican legislators is a huge mark against someone who wants to lead the state, which includes millions of non-Democrats. It’s also profoundly disappointing considering that her earlier agreement to share power with Republicans on redistricting showed leadership and political courage – two attributes that have been sorely lacking among Oregon’s elected officials.”

Jung’s smack mattered – Kotek quickly drew up a new map. And the Republicans smartly decided to come back to the Capitol and pass it, rather than leave the congressional district line-drawing in the hands of a panel of judges. But still Republicans cry foul, seemingly oblivious to the new opportunity. Conventional wisdom speaks.

But have Oregon Republicans been shafted again? Don’t think so.

Let’s look at the new districts and the political numbers within them. We’ve borrowed these numbers from David Wasserman of the Cook Political Report.

· Out: Parts of Washington County. In: Tillamook County.

·  Out: Bend and Hood River. In: Josephine County and parts of Douglas County.

·  Out: Parts of Northwest Portland. In: Hood River.

·  Out: Salem. In: Bend, Redmond, Lake Oswego and Milwaukie.

Modern political history shows how far off conventional thinking might be in 2022. In both the 1994 and 2010 midterm elections – both two years into the first terms of Democratic Presidents Bill Clinton and Barack Obama – voters reacted in a big way to the one-party rule of the incumbent party that happened to control the presidency and both chambers of Congress.

In the 1992 presidential election, Bill Clinton defeated President George H.W. Bush by a percentage of 43 to 37. Two years later, in the midterms, Republicans won 51.7% of the vote to the Democrats 44.7%, picking up 48 congressional seats and capturing control of the U.S. House. Amazingly, Republicans added 14% to their vote total from ’92 to ’94.

In the 2008 presidential election, Barack Obama defeated John McCain by 53% to 46%, or 7 points. Democrats went into the 2010 midterm elections controlling, as in ’94, the presidency and both chambers of Congress. In the November midterm election of 2010, Republicans won 52% of the vote to the Democrats’ 45% – an almost identical reversal of the 2008 presidential election. This time Republicans won an additional 64 seats and once again retook control of the U.S. House.

For the Northwest, the most impressive historic turnaround in Congressional results of a state delegation came in Washington State. Going into the ’94 midterm election, the Washington state delegation consisted of eight Democrats and one Republican. Coming out of the ’94 election, the new Washington delegation consisted of seven Republicans and two Democrats. The amazing turnaround included the defeat of four U.S. House incumbents, including House Speaker Tom Foley and members Jay Inslee and Maria Cantwell. It was such a political earthquake that no voter model would be agile enough to even predict.

We turn now to the new map in Oregon. If we throw out the conventional wisdom, and adopt a voter model closer to what happened in the 1994 and 2010 elections, this would add five percentage points to the generic Republican vote total and subtract 5 percentage points from the generic Democratic vote total. What this shows is victories for the Republicans in three congressional districts and victories for the Democrats in only two districts, with Oregon’s 4th congressional district too close to call. However, we think that in a close 4th district race in a Republican landslide year, challenger Alek Skarlatos would defeat incumbent Peter DeFazio.

Our model shows the 2023 Oregon congressional delegation consisting of four Republican members and two Democratic members. A reversal very much like that of the Washington state delegation in ’94.

So, what’s not to like about the new Oregon congressional map? But don’t wait for the purveyors of conventional wisdom to get it right – their specialty is Monday morning quarterbacking.