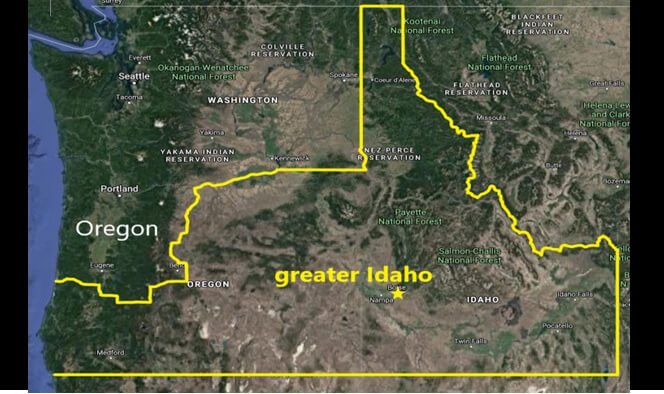 2021 Election Update:   On election night, November 2nd, Harney County became the 8th Oregon county to approve a plan that works towards moving the County out of Oregon and into a Greater Idaho territory. The measure passed with 63% of the vote. The other counties that have passed similar measures are Baker, Grant, Jefferson, Lake, Malheur, Sherman and Union County.

In similar news, a poll of Idaho voters shows that they would welcome such a move. KATU-2 TV reports,“A recent poll of 1,100 Idaho voters found a majority in support of adding parts of rural Oregon to the Gem State. The most popular reason? To protect rural Oregon counties “from Portland politicians,” according to the poll.The group Move Oregon’s Borders for a Great Idaho said the poll by the Trafalgar Group found 51% of respondents were in favor of expanding the state’s borders to incorporate parts of Oregon. Of those polled, 35% were opposed; another 14% were undecided.”