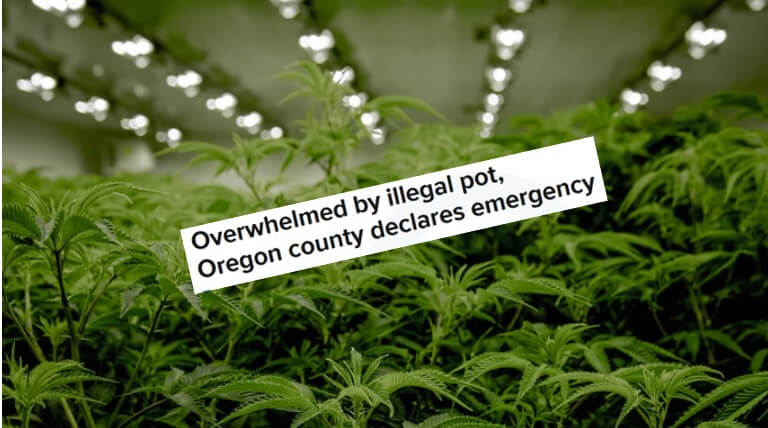 Many who live in and around the beautiful Southern Oregon communities of Medford, Ashland and Grants Pass are frightened and angry. Frightened to see their quiet communities in danger as their homes – up and down the Rogue Valley – become the neighbors of hundreds of illegal marijuana operations, which bring with them exposure to increased dangerous criminal activity. Angry at the failure of state and federal government to provide meaningful help to take down the criminal cartels behind these operations, which are openly using the valley’s land and water to grow millions of pounds of illegal marijuana with a retail worth in the billions.

Across Southern Oregon, hundreds of “hoop houses” (plastic wrapped, half-moon shaped, 150-by-60-foot nursery-type structures) have been popping up – each containing roughly $6 million worth of marijuana plants – oftentimes part of a compound that is sheltering undocumented immigrants pressed into service to raise these crops. Foreign crime syndicates operating many of these “grows” come from China, Mexico and other countries. There are reports that these criminals are heavily armed, and it has been reported that marijuana workers are bringing AK-47 rifles with them as they visit local grocery stores. The roads leading from residents’ homes are also being blocked by cartel members during the harvest and transport of nearby marijuana crops.

Southern Oregon is facing this illegal marijuana issue for several reasons. Notably, the Rogue Valley area, along with northern California, is one of the best growing areas in the world for marijuana. Since the 2010 legalization of hemp and marijuana and the 2015 finalization of the state’s enforcement mechanisms, it has been easy for illegal grow operations to set up in the middle of legal hemp and marijuana businesses with little concern for the law. This ability to “hide in plain sight,” coupled with the speed, ease and low cost of setting up hoop houses; the availability of hundreds of undocumented immigrants; and the fact that local law enforcement is overwhelmed, have made the region a mecca for illegal drug activity.

My staff and I have attended and participated in numerous meetings with law enforcement and local officials in Medford and Grants Pass over the past several months to discuss a plan of action. We have contacted the Federal Bureau of Investigation, the Drug Enforcement Administration and the Department of Homeland Security asking for help. During a recent House Judiciary Committee hearing, I raised this issue directly with United States Attorney General Merrick Garland. I detailed to him the worsening situation in Southern Oregon and made it clear that we need federal assistance for what is a federal problem. Following the hearing, I wrote a detailed letter to Garland providing further information given to me by local law enforcement and asking for specific action to help us effectively combat this crisis. I am awaiting a reply.

As we move forward, I intend to bring this consequence of legalization to the attention of those wishing to make marijuana legal at the federal level. The Department of Homeland Security has recently visited the Rogue Valley to assess the situation. I hope this visit and my office’s continued engagement with partners at the local, state and federal levels will bring this dangerous situation to the attention of the nation. It is obvious that if marijuana is to be legalized, the industry must be clearly controlled and effectively regulated. This is not happening now.