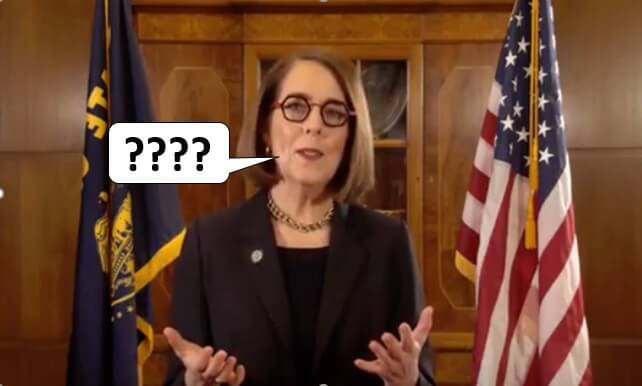 We applaud some of the success Oregon has made during the past few years of turmoil, but Oregon Governor Kate Brown’s State of the State speech this week made some whoopers statements that demand someone tell the other side so Oregonians see the complete picture.

BROWN: “The unemployment rate is near record lows.”

TRUTH: The unemployment rate is low nationwide because the nation is suffering from an epic labor shortage where people have bowed out of the workforce.  Remember, Oregon kept paying people to not work when other states stopped.   The Atlantic Magazine called Oregon a “Welfare Utopia” and as a result people moved to our state to NOT work.  This is why Oregon is famous for having some of the largest homeless camps in America.  Do you think these massive camps are full of people who are registered with the Oregon Employment Department and are actively looking for work?

BROWN: “Family incomes are on the rise.”

TRUTH: Inflation and prices are rising faster than income, which means that family income is actually SHRINKING in real world value.  Furthermore, Oregon rates #41 among #50 states in after tax income.  So, Oregon wages are growing from the bottom of the pile and not enough to keep up with inflation.

BROWN:  “We increased the graduation rates for Oregon kids by 8%”

TRUTH: Graduation rates fell 2% last year!   Governor Brown manipulates the numbers by taking a longer view to look better.  Here is the complete story: before the pandemic, Oregon was suffering from the second worst graduation rate in America. Graduation rates were always going to go up and look better when you compare yourselves to the bottom. Expect graduation rates to rise even higher since last year Oregon became one of the only places in America to drop graduation requirements.  The same week, Governor Brown praises her misleading education gains was also the same week a scathing front-page report came about our schools failing minorities.   The Oregonian reports,“Black eighth-graders in Portland Public Schools, on average, read at about the level they should be in the fall of sixth grade…Latino students, meanwhile, consistently tested about a year behind in reading, according to the analysis. Results were even worse in math. Black and Latino fourth-graders were about 2 1/2 years behind, on average. Latino eighth-graders were 3 1/2 years behind. Most shockingly, Black eighth-graders were about where they should be at mid-year of fourth grade. The data is particularly troubling considering more than 30% of all Black children in Oregon attend Portland Public Schools.”

BROWN:  “all three branches of government came together to get money to renters in need.”

TRUTH: Roughly, 75% of Oregonians failed to receive requested rental relief. Delays forced the Oregon Housing and Community Services to distribute only 25 percent of the targeted $134 million to tenants seeking relief by its September 2021 deadline. (OPB 9/15/21).  A few months later, the very same agency was faulted for sending checks to the wrong people. (KATU-2 1/10/22).

TRUTH: Yes, in 2017 the State passed a $5 billion road tax over 10-years. So with $5 billion in hand, why is Governor Brown trying to force a first-ever Interstate toll on Oregon’s two busiest highways (I-5 and I-205)?   Why did she raise a Corporate Activities Tax (2019) that hits car dealers and a Small Business Tax (2021) that hits car dealers when she already hit them with a first ever car sales tax (2017) as part of her massive road tax?  Then in 2021, she raised road costs even higher by passing a prevailing wage mandate that forces government to pay even higher for road projects — despite the fact that contractors could build it for less.  With all that “investment” money what do taxpayers have to show for it?   Where is the new construction on the Columbia River Bridge?  Where are the new major bypasses to reduce traffic?  Why has the Rose Quarter road project gone from a $450 million price tag to a staggering $1.2 billion for a simple lane extension?   As for Brown boasting about ports, why is Oregon closing ports and blocking new ones?  There is little “investment” in Brown’s promises, only more waste of taxpayers money followed by raising even more tax money to cover the original waste.

BROWN: “And I will marshal my colleagues to once again make a significant investment in affordable housing.”

TRUTH: Governor has been marshaling her colleagues to make affordable housing worse, not better. She signed a Carbon Tax Executive Order which forces higher costs on building construction. Governor Brown did that on her own without a vote of the people or the people’ elected Legislature.   Governor Brown raised taxes on construction companies when she signed the Corporate Activities Tax (2019) and the 17% Small Business Tax (2021) which will hit these industries and others very hard.  Governor Brown also raised numerous fees on these industries.   As a result taxes, fees and Executive Orders were enacted which raised the cost of housing which then allowed government to raise even more taxes so government could buy housing units (which cost more than the average house) and give them to people because they couldn’t afford to buy a house as a result of the taxes, fees and Executive Orders.

BROWN: “Oregonians have worked together to prevent the worst impacts of this virus.”

TRUTH: Oregonians may have worked together but not with the Governor.  Governor Brown made her key Covid decisions behind closed doors.  Brown completely shut out the public and shut out the people’s elected lawmakers from the decision-making process.  Brown even blocked the media a dozen times from getting critical data on Covid.   At times, Brown even refused to let counties know what the criteria was for re-opening so local governments could not “work together” with the Governor much less be listened to.  In essence, the Governor made it illegal and impossible to work with.

The entire pandemic can be summed up as Governor Brown making decisions behind closed doors and from those closed doors came some of the nation’s toughest, hardest-hitting, least flexible restrictions.   Let me explain; Oregon was among the first to shut schools and last to re-open (nearly a year behind others), Oregon was among the first to close businesses and among the last three to re-open June (2022), among the few to close in Fall 2020, and among the last to re-open in 2021.   Oregon was the last to open arenas and among the last few with indoor mask mandates.   Oregon was the only state to put both prisoners and teachers ahead of at-risk seniors in line of the vaccine.  Even Governor Brown skipped ahead of her age group to get a vaccine despite pledging not to.  Oregon was among only four states with the strictest, least flexible vaccine mandates (vaccinate or be fired).   At every stage of this pandemic, Oregon citizens suffered more, sacrificed more, and lost more than most Americans.    We lost more businesses.  We lost more jobs.  We lost more rights.  We lost more schooling time.   And yes, we lost more schooling time when Oregon already had one of the shortest school years in the nation.    To say that none of it all could have been done a little bit better or wiser or smarter than Governor Brown’s way (without public participation) is just folly.