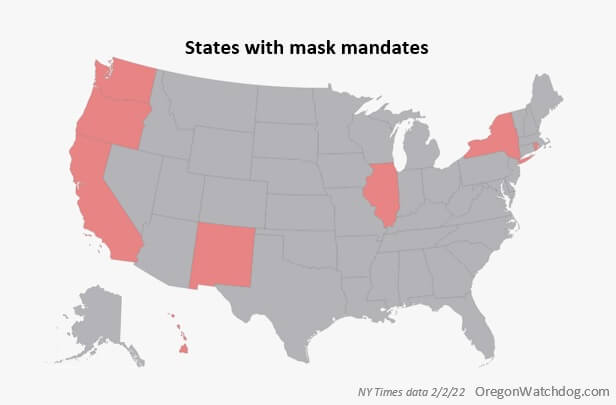 The above chart shows the last remaining states with a statewide mask mandate. California is ending their mask mandate in a few days as Oregon has extended theirs until March 31st.  When you look at the state with a mask mandate you will notice that it appears that Covid and Omicron appear to be only impacting states controlled by politically liberal governors (Washington, California, Illinois, New Mexico, New York, Rhode Island, Massachusetts, Hawaii).  Nevada also has a county-by-county mask mandate and New Jersey and Delaware just announced an end to their mask mandate.

Is this virus discriminatory?    Are the other states putting their citizens at risk or do they know something we do not know?

House Republican Leader Vikki Breese-Iverson (R-Prineville) issued a press release on the current mask rules, “Oregonians are tired of these arbitrary deadlines and the Governor’s neck-snapping decisions. People have lost trust in Democratic leadership and are demanding accountability and transparency. House Republicans trust Oregonians to make their own decisions. That’s why we have proposals to end the current state of emergency and limit the duration of a Governor’s emergency declaration. Now is the time to reform the executive branch’s emergency powers to prevent this overreach from happening again.”