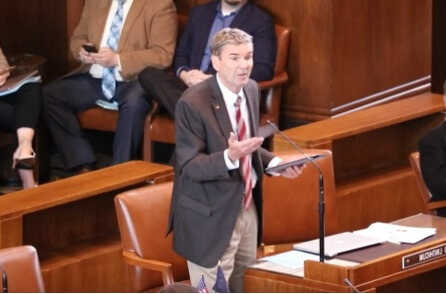 SALEM, Ore. – Today Democrats passed Senate Bill 1510 out of the Senate Judiciary Committee along party-lines. The public hearing for Senate Bill 1568 also tees up more bad policy by making it easier for criminals to get out of jail, making life more dangerous for other Oregonians.

SB 1510 would ban police from enforcing common-sense traffic safety measures like functional headlights and taillights, during a period of unprecedented increases in traffic fatalities in Oregon.

In addition, SB 1510 would escalate encounters with the public, as they would be required to seek consent to a search of a vehicle. Yet, the bill does not change statutes that allow police officers to search a vehicle under probable cause or reasonable suspicion.

“Not only does this bill fail to address any safety problems, but it will require police officers to give false hope to drivers, only to search their vehicle regardless of their consent. That is a recipe to escalate interactions with police,” Linthicum added. “This is a perfect example of how good intentions can have deadly consequences.”

Finally, the bill appropriates millions in funding for grants to the Justice Reinvestment Equity Program which has an express purpose of “promot[ing] racial equity [and] reduc[ing] racial disparities.”

A Legislative Counsel opinion found that the language in the bill may allow for racial discrimination. While the bill does not explicitly mention race-based discrimination, the opinion discussed the use of the term “culturally responsive organizations” which could be interpreted as a proxy for race:

“[C]ulturally specific organization by definition “serves a particular cultural community [and] is primarily staffed and led by members of that community.” “Cultural community” is not synonymous with race. However, coupled with the Justice Reinvestment Equity Program’s express purpose of “promot[ing] racial equity [and] reduc[ing] racial disparities,” it is possible that in the implementation of the program, “cultural community” could be interpreted as a proxy for a specific racial group, and the program could provide grant funds to an organization based on the organization’s explicit categorization of persons it has served or will serve based on race.”

Therefore it could be found unconstitutional under the Equal Protection Clause of the 14th Amendment of the US Constitution. The 14th amendment was passed in the wake of the Civil War to prohibit racial discrimination in the states.

“This bill is chocked full of terrible provisions that will further degrade Oregonians’ safety,” Linthicum said. “But this section is perhaps the most sinister. Democrats have written this bill with crafty language in hopes of skirting the Constitution. Oregon has already been admonished by the courts over this kind of racial discrimination. There is broad bipartisan agreement, with constitutional support, that racial discrimination is flat-out wrong. I am shocked to see this kind of provision making its way through the legislature.”

Senate Bill 1568 would create a new unelected, unaccountable board to consider the release of criminals from prison. Board members will be appointed by the Governor, without any input or confirmation from the Senate.

The board will not include any representatives from law enforcement or victim advocates. The bill gives the board power to grant criminals a “get-out-of-jail-early-cards” when the Governor declares a state of emergency, like she did when she shut down businesses and required healthy Oregonians to stay home.

“Supporters of this bill want Oregonians to believe that letting unaccountable bureaucrats release criminals from prison is compassionate. It is not compassionate to crime victims or our system of justice. There is no other way to characterize these bills than being pro-criminal.”

A work session is scheduled for SB 1568 tomorrow at 8 AM.