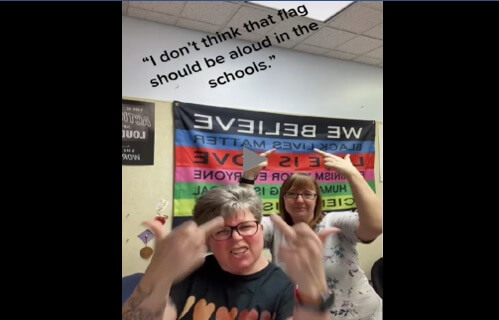 KOIN-TV reports that yesterday the Newberg School District said that select staff members have been put on administrative leave arising from controversy over a TikTok video where school employees are alleged to be flipping off parents and the School Board in protest over flag policy in the classroom.    The details of the video and those involved are still being investigated.

The video was brought to light by the Yamhill Advocate which stated, “Using the TikTok account crazybulldogs33 (which names itself ‘Middle School Counselor Life’) school employees of the Newberg, Oregon…  the message of this video is clear; the people who these school counselors are flipping the bird at are not only the school board directors who passed the policy, but also the parents of the children in the district who are against the flags in the classrooms. These are public employees defying the ban on politically divisive symbols and mocking the directors, parents and voters who want these flags to be removed.”

Previously the same Newberg district had two teachers who tore down their American flags from the classroom in protest as they said the flag stands for extremism and violence.

This is the same district where liberals tried to recall two sitting School Board members because they disliked the School Board for daring to fire the School Superintendent.  It was the secodn largest recall in Oregon history — funded mostly by government unions and Hollywood industry celebrities.  Voters rejected the recall.