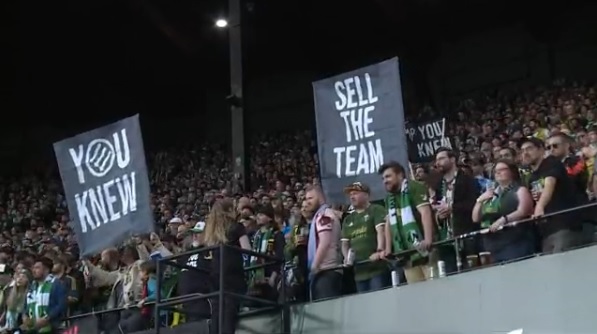 KGW-TV reports the problems include, “an investigation into former Thorns coach Paul Riley after he was accused of sexual harassment and sexually coercing his players, which came to light last fall. Another black eye is the team’s handling of domestic violence allegations against former midfielder Andy Polo. An investigation by Major League Soccer cleared the team of wrongdoing, but the MLS fined the Timbers $25,000 for missteps in reporting the allegations.”

Before Covid, the same team was hit over not allowing three arrow (Antifa) signs during the game, a policy the team reversed.  If you look at the protest photo you can see the same three arrow sign in the protest banner.

The recent controversy is much more serious and it will remain to see the impact of the protests.