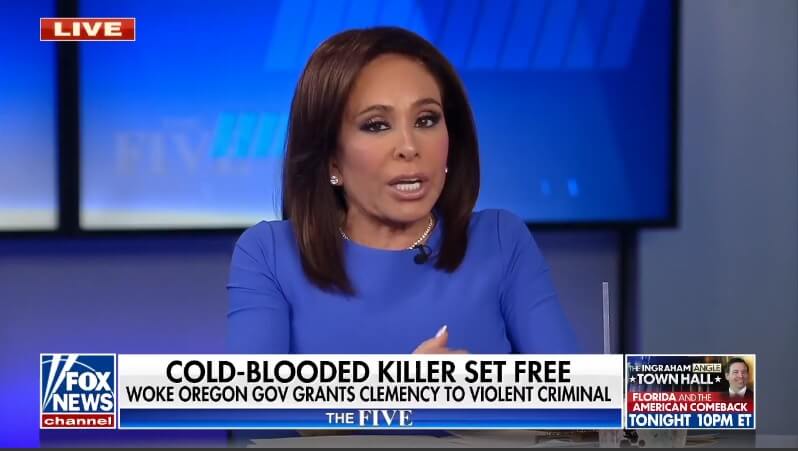 Fox News “The Five” show had Judge Jeanine Pirro blast Governor Brown along with an article in the NY Post.

The NY Post wrote,“However, earlier this month, Brown granted the killer clemency – sparking a wave of criticism from prosecutors, law enforcement, politicians and Thrasher’s family.The teen’s mother, Holly Thrasher, said she wasn’t even made aware of Brown’s decision…Douglas County District Attorney Richard Wesenberg sent a letter to Brown’s office objecting to Hedquist’s release, saying the killer is “uninterested in having his version of events be based in reality,” KOIN reported. Kyle Hedquist.At age 17, Kyle Hedquist was convicted of murder in the death of 19-year-old Nikki Thrasher.Oregon Department of Corrections“There are thousands of pages of discovery on this case, and yet large swaths of Hedquist’s petition are completely unsupported by any of them,” Wesenberg wrote. “In fact, many statements fly in the face of the evidence.”His statement continued: “This office has concerns that clemency for Mr. Hedquist will erode faith in the justice system. Specifically, clemency for Hedquist will demonstrate that a life sentence without the possibility of parole does not really mean a true-life sentence.”