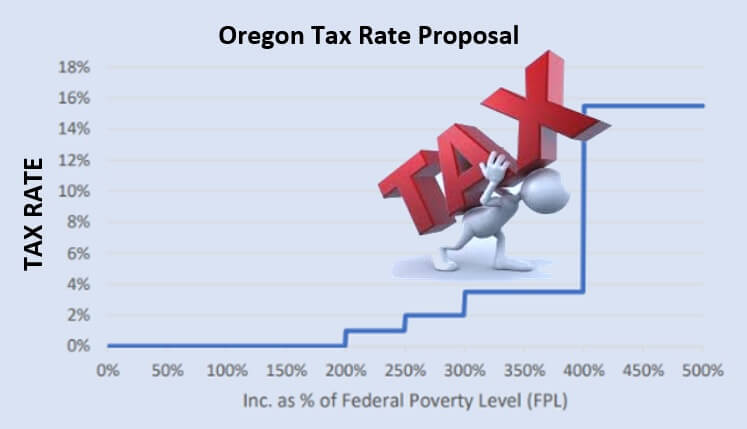 Undeterred by the State of Oregon’s chronic inability to administer its core programs – like its failure to deliver Unemployment checks, renter relief checks, DMV crash, quarter billion in Measure 110 treatment funds delay – the Oregon Legislature’s Universal Health Care Task Force blithely is running toward delivering a proposal to take all Oregonians’ health insurance away and replace it with a state-administered single-payer program. The Task Force’s formal report, required by 2019’s SB770, is due in September.

This would be a massive undertaking that would intentionally upend the entire health care system in the state. The state optimistically estimates that this monster program would cost $57 billion in 2026 alone, and it would require massive taxes of as much as 15.5% of income – on top of Oregon’s already high income tax of up to 10% of income — and by “redirecting” federal money that currently supports Medicaid and Medicare in Oregon. Of course, the Task Force doesn’t call this taxation. They prefer to call the taxes “contributions” – as if there would be a choice! The slide below, presented to the Legislature, shows they are counting on soaking the “rich.” 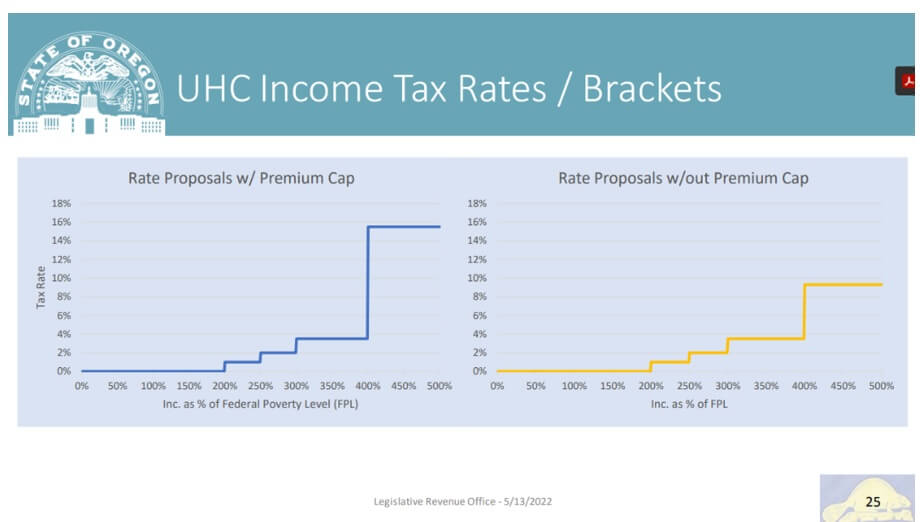 The top rate would kick in at 400% of the Federal Poverty Level – in 2022, that’s $54,360 for an individual. But the most well-off taxpayers, many of whom can work somewhere besides Oregon, aren’t just going to stand around to be taxed heavily and lose their nice health benefits. They’ll leave.

More than 95% of Oregonians have some form of health insurance – private, Medicare, or Medicaid. Surely there is a simpler way to help the remaining 5%. Does anyone in Salem remember Cover Oregon, whose job was only to build a website for individuals to buy private health insurance?! That $250 million fiasco became fodder for television comedians. Does anyone really believe that the same state government that couldn’t build a decent website can run all of health care?

But the outlines of the “Universal Health Care Task Force” proposal are no joke. It would:

• Outlaw most private health insurance.
• Force doctors and other health care providers to accept the state plan’s low payments and prohibit them from charging any other fees.
• End Medicare and Medicaid in Oregon.

So far, the Task Force has spent $1.6 million on consultants to dress up its pre-determined plan. A lot of legislators are having “town hall” meetings this summer as they campaign for reelection. Tell them to stop work on this terrible idea and fix what they already can’t operate before they even think about new, expensive, freedom-robbing programs.