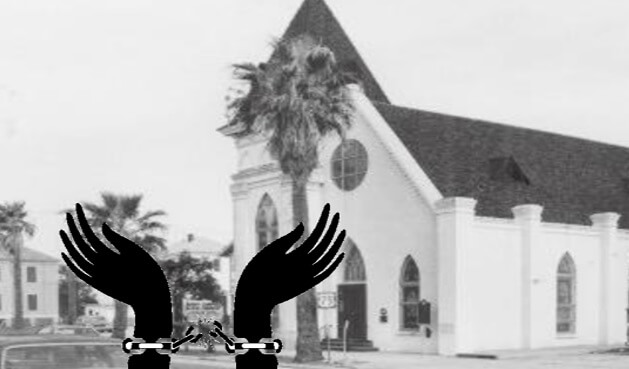 Tablet Magazine explains the church behind the very first event that celebrated Juneteenth:

“According to Gillins, contemporaneous newspaper coverage shows that “the very first formal celebration of Emancipation was held at Reedy Chapel AME Church,” on January 1, 1866, to mark the anniversary of the effective date of the Emancipation Proclamation. She said it included a march from the Old Galveston County Courthouse to Reedy Chapel, where a program was held inside, with a reading of the Emancipation Proclamation and speeches by U.S. military personnel. The newspaper reports at the time said 800 to 1,000 people took part in the march—no more than about four blocks—in freezing rain. Gillins said the paper announced the march the day before, inviting “colored persons and their friends.” “To me that says this was a diverse group,” she said. “It wasn’t just Black people.” “Every year we reenact that celebration,” Gillins said of the current Juneteenth celebrations. “We march as a group from the old Galveston Courthouse—we assemble there first, then we read the General Order Number 3, which says all slaves are free, and then we march as a group singing joyfully as we march to Reedy Chapel. And then we have a program inside, where we read the Emancipation Proclamation, we have music and inspirational messages—basically the same thing that happened in 1866.”

• Juneteenth, in a way, is a day when liberty reached everybody.   The message still needs to be heard.  With millions of people today still under human trafficking and slave-like conditions in Asia and the Middle East, the message needs to be celebrated and broadcasted so America can liberate others.

• Consider how important this news meant to the slaves who heard it for the first time.

• Consider that despite hostilities by locals against celebrating the emancipation, the first Juneteenth people were made up of different races willing to endure both local harassment and threats by locals, as well as freezing January 1st rain, to make their voice heard.   That is inspirational!!!

• Consider how the first Juneteenth honored veterans who fought for them.   Freedom is not free — the abolitionists and the veterans paid a price so we could be free.

• The first Juneteenth celebration was held at a church built by Black Americans and continues to this day to share their story and their Christian message of liberty, unity and charity.  Also that they celebrated Juneteenth “joyfully” as tyranny lost to liberty.

—  Support independent journalism.  If you value this type of reporting please contribute online at OregonWatchdog.com (learn about a Charitable Tax Deduction or Political Tax Credit options to promote liberty).