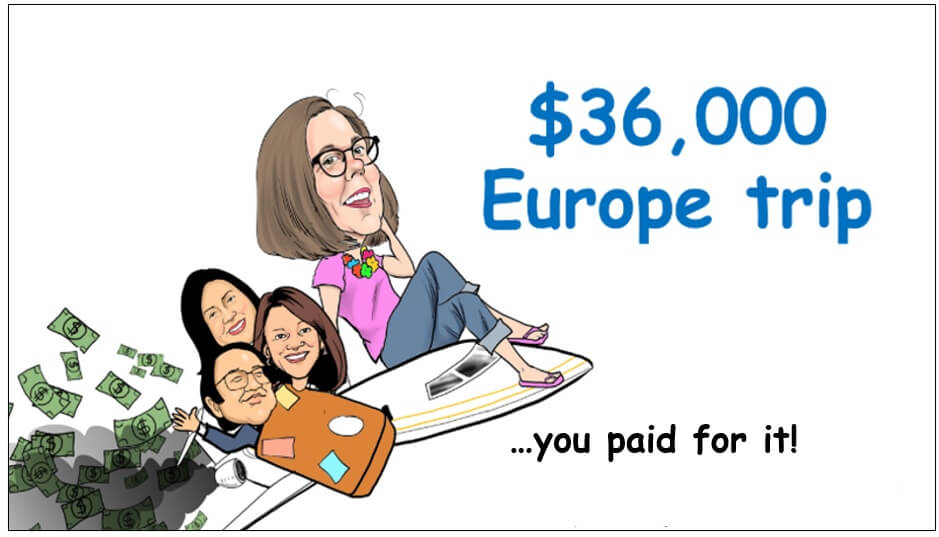 It cost Oregon taxpayers a stunning $18,586 to fly Governor Kate Brown and her staff to a United Nations Climate Conference in Scotland. So wasteful there were many $500-a-night rooms were unused. Unused! Notably, Gov. Brown traveled last fall, which was a time when she shut down local businesses. While Gov. Brown was forcing your favorite restaurant to turn away customers, she herself was dining in Europe at taxpayers’ expense.

Another $18,000 of taxpayer dollars was spent to send three politicians (Metro Councilor Duncan Hwang, Multnomah County Commissioner Susheela Jayapal, Portland City Commissioner Carmen Rubio and Bureau of Planning and Sustainability Chief Donnie Oliveira) to Denmark for another climate conference. The conference theme was how to decarbonize businesses, which is another way of saying to tax and regulate private companies even more. How strange that it likely cost a staggering half million pounds of carbon for these few politicians to attend a conference on the environment.

The state of Oregon has more than 500 state employees who live in other states full time. Some live in income-tax-free states where their payroll is not taxed. Two lottery employees, making about $200,000 each, conduct all their work from Texas and Florida. Some employees make taxpayers pay for their plane trips back into Oregon to see their bosses.