Governor Kitzhaber’s address should begin in just a few minutes now. You can watch it live here or KGW’s feed here. We’ll highlight the important parts here once its over.

You can read a pre-published copy of Kitzhaber’s speech here.

Out of interest, here is the word cloud for Governor Kitzhaber’s speech: 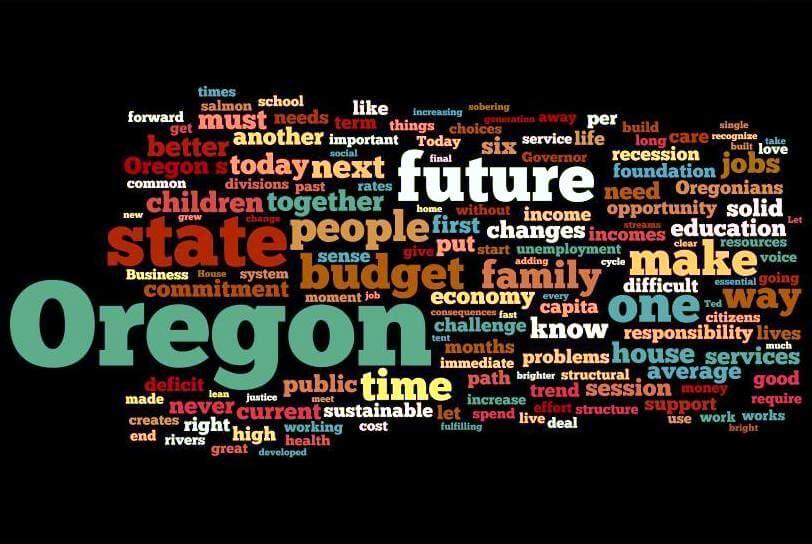 This is the word cloud for his 1995 inaugural speech: 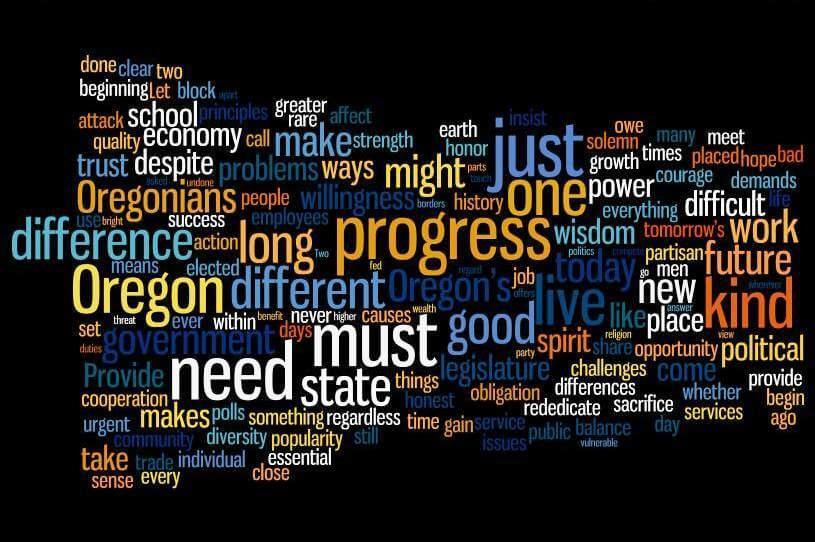 Governor Kitzhaber basically communicated that Oregon is in budget trouble. We’ve been doing things wrong continuously for the near-past. “In our present course,” he said, “we are neither fulfilling our responsibilities to one another or to our children.” The immediate problem is Oregon’s $3.5 billion budget deficit. Kitzhaber explains the problem with an analogy:

Think of Oregon as a house that was built decades ago. And think of Oregonians as family who’ve lived in that house for generations. Now, the way the house was designed probably made sense at the time it was built. But over time the family and its needs way it lives have changed but the structure of the house hasn’t.

There are too many rooms and they aren’t the right size. There’s no insulation and windows are drafty. And the cost of keeping this house up is more than the family afford. The roof needs to be replaced and the siding is falling off. And at some point, simply patching things up isn’t good enough. The point comes when you have to build new house that’s affordable and that’s designed for what the family needs and the family lives.

For better or for worse, the Great Recession has leveled the House of Oregon to its foundations and has given us the opportunity to rebuild it for the 21st century.

Kitzhaber did not detail a comprehensive plan explaining how he will rebuild Oregon’s house. His “budget and structural reforms” are supposed to be explained this coming Friday. The two budgeting reforms he did explain are right on the ball, however. First, Kitzhaber is going to move Oregon from a two-year budget cycle to a ten-year budget cycle. This allows for long-term planning and smarter spending. (But don’t think this is a new idea, people have been pushing for long term state planning for years). Second, Kitzhaber wants to move from a “current service level budget” to “outcome-based budgeting.” This is another smart move. Outcome-based budgeting establishes an objective and then balances the budget until that objective is reached. (You know, the way successful businesses have always run their budgets.)

Kitzhaber did make one peculiar remark. He said, “Less and less is being invested in our children and educational system.” Supposedly, “We can, over time, reverse our current trend of disinvestment in education.” Apparently Kitzhaber thinks educational spending is the problem with Oregon’s educational system. You know, the same line you always here: Just give schools more money and we can rebuild Oregon education. I pray Kitzhaber’s plan is not that simplistic.

Now, time to tear down the old house and build a new one? Yeah. We’ll see if it actually happens. And if it does–what kind of new house will we all be living in?