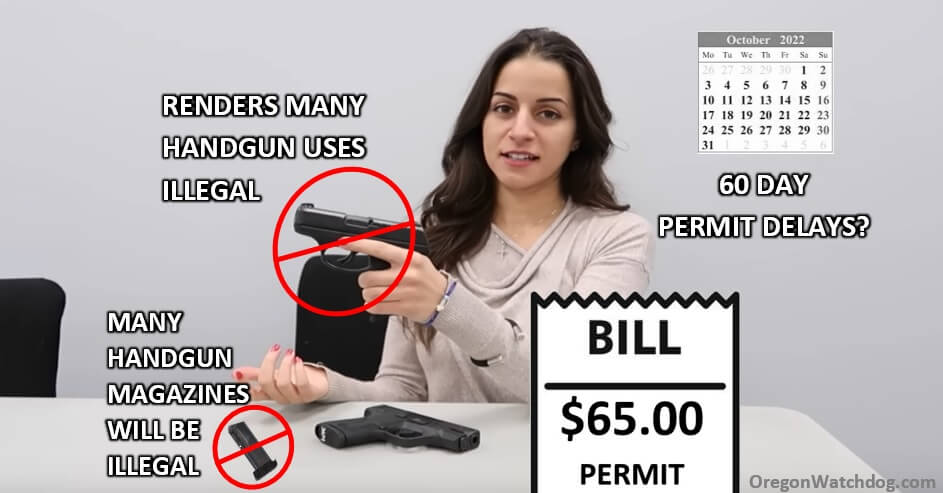 Taxpayers Association of Oregon urges a NO vote on Measure 114.

Measure 114 would create lots of bans, lots of bureaucracy and lots of bills to pay.

Measure 114 bans firearms magazines over 10 rounds.   Washington Times notes,” According to the libertarian CATO Institute, most handguns sold in the U.S. come with magazines that hold between 10 to 17 rounds. Pistols that hold 10 rounds are usually compact or subcompact models. Full-size pistols that are commonly used by law enforcement officers have 12- to 20‐round magazines as standard capacity.”

Because many rifles and handguns use over 10 rounds, it means having them in your firearm will be illegal for common uses (a few narrow exceptions being rifle range, home, hunting).    This in turn, will make many firearms illegal even if it is a smaller handgun.  You must destroy, disable or mechanically repurpose the magazines and/or do the same for the firearm if you wish to use it for common purposes (like protecting yourself when you travel to dangerous places or if your life is threatened).

Measure 114 creates a new $65 permit fee for when you wish to purchase a firearm.  That “gun tax” is allowed to be changed, and could easily double or triple to $200 in the future.  There is nothing preventing the permit costs from hitting $1,000.

Measure 114 appears to allow no restrictions on the delay of issuing a permit.   If you life is in imminent danger, it may take weeks to protect yourself.

Measure 114 creates a searchable database of all firearm permit holders.

Currently possessed magazines over 10-rounds will be limited to use on the owner’s own personal property, at a shooting range, or while hunting

We encourage a No vote on Measure 114