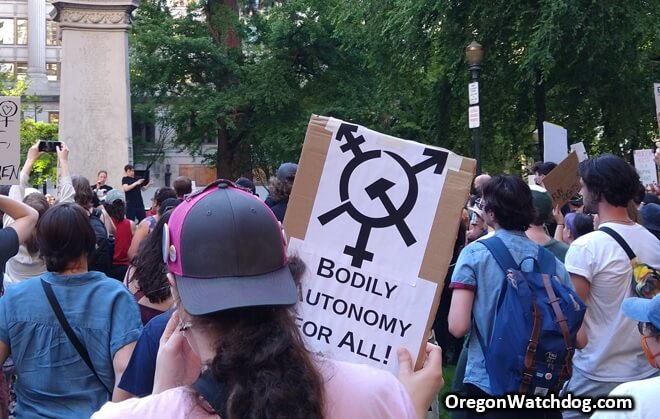 A thousand people showed up to Lownsdale Square in Downtown Portland for a rally put on by the Portland Democratic Socialist of America.

They protested many messages from abortion rights to free health care to outright class warfare. 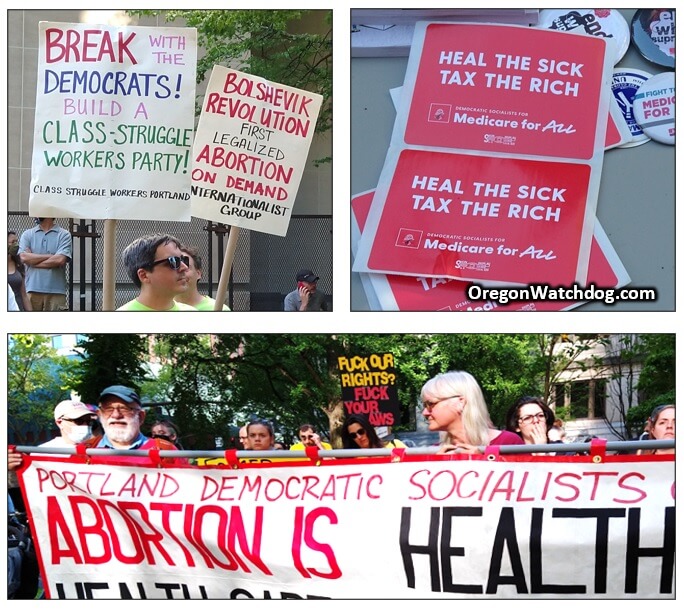 Their brochure distributed at the rally states that capitalism leads “toward total catastrophe”. 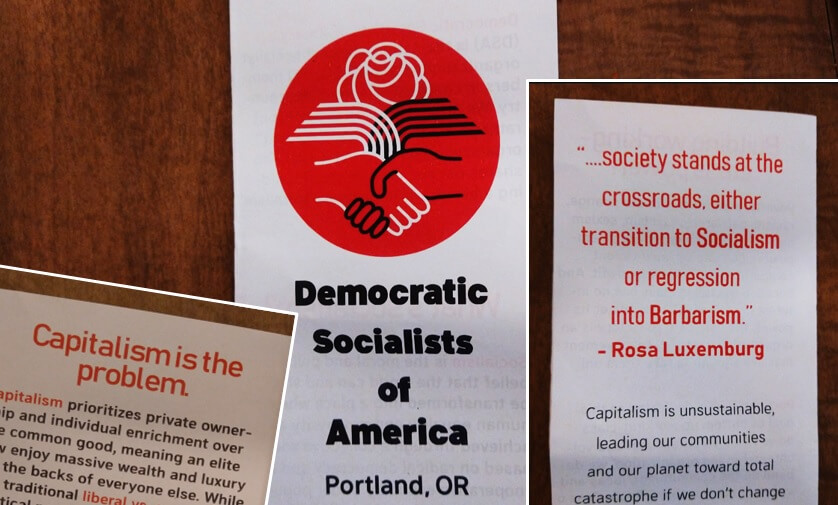 The Socialist rally featured a speaker (top right) from the military themed Brown Berets for which Wikipedia states is a pro-Chicano group that advocates “to separate the American Southwest from the control of the U.S. government.” 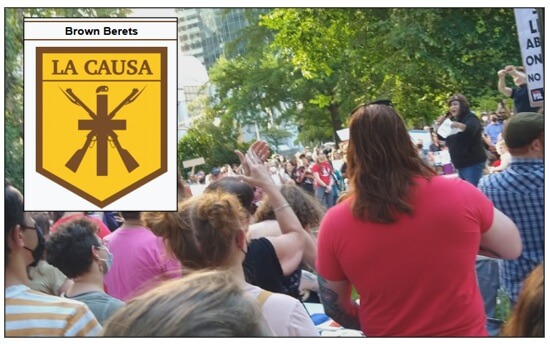 The Brown Beret speaker at the rally complained of all the crime in Portland.  She spoke on witnessing drive by shootings and then commented that she left dangerous places like Salvador and moved to Portland “to get away from all that sh*t!”

Here are some of the words spoken by other rally speakers:

• “We must build a multi-national, multi-gendered working class party to challenge the out-of-touch Capitalist political system. It is our duty to to take the outrage we are feeling and build an even bigger, more organized, more disciplined, more powerful, more unified movement, against this system, against Capitalism!” (audio)

•”…make evictions a thing of the past…”

• “There are only two classes of people in this world, the working class and the Capitalist class”

• “..and until those rights are not only guaranteed by the law, but by the power of the people, until the working people that makes the gears of the capitalist machine turn, actually run the world, until the socialist future is realized, our fight is not over.”

<<* personal comment: We at the Taxpayers Association of Oregon would like to “take back the wealth” by lowering taxes for everybody, but under a socialist system they raise taxes (sometimes up to 70%) and then gives it to Big Government and then Big Government gives a tiny portion of it back in the form of free goods back to taxpayers — which taxpayers could have bought in the first place if their taxes were not so high.   Because Oregon is both in the top 5 biggest spending states per-capita and top ten regulation states in the nation, Oregon is a tiny step closer to socialism than most of America.  What do we have to show for it?   Oregon has a $26 billion dollar government pension debt that is wrecking every single agency in high costs and every taxpayer in high taxes.  If socialist prone Oregon can’t balance its own checkbook (by being off by $26 billion) why would another $26 billion through higher taxes make it better?   Furthermore, Oregon received five financial scandals during the pandemic alone, (1) failure to deliver nearly a quarter million unemployment checks (2) failure to deliver 70% of pandemic rent relief checks on time, (3) a near 100-day DMV delay at a time when other states were uninterrupted, (4) among the bottom five in slowest states to vaccinate it’s seniors on the onset and (5) while Oregon suffered from being the single worst state for hospital capacity (due to health worker shortage) Oregon government did not properly use it’s $4 billion in Federal Covid relief to help add life-saving health care workers to fix the problem (like other states did) but instead spent $700 million of Covid funds on unrelated political pork projects and stashed $1.2 billion in a slush fund to spend mostly after the peak of the pandemic had passed instead of saving lives in real time.  If more government was the solution then Oregon would be among the best performing states in these areas, but is among the worst.   It turns out that higher taxes and higher regulations gives you less freedom, less choice, less services, less economic growth and less government productivity.  >>

At the socialist rally there were many threats and extremism demonstrated.  Read our companion article: