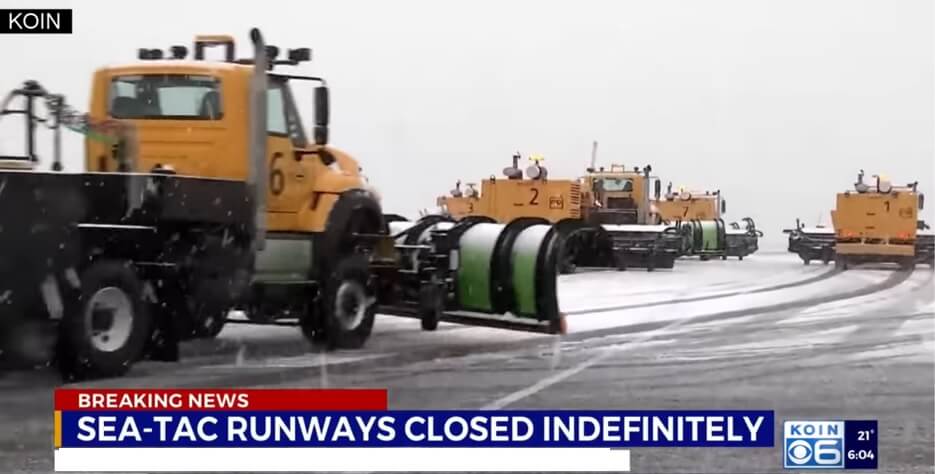 My heart goes out to all the tens of thousands of people stranded in the past few days.   My friend’s family on Christmas Day was in their airplane, waiting on the tarmac when the pilot turned the aircraft around, back to PDX airport for deplaning.  They got stuck on Christmas Day.  Oh dear.

The United States just got hit with an unusually fierce storm, record breaking temperature drops, and it all occurring within the single busiest time of travel of the entire year.   The unique way the storm hit, was that it ended up disproportionately disrupting smaller-route airlines over larger route airlines.  And yes, some smaller airlines already had existing epic-size problems before the storm struck — which is now on full display for the world to see.

I felt like this was a good time to remind the lofty Transportation Department that your first job is to HELP when we are in the middle of an unusually widespread storm crisis.   Your first job is not to issue blame, look good, take credit for making demands, and make a scene while tens of thousands are still stranded and trying to find a way home.    Mr. Government, you can do all that media activity if you just wait, like 100 hours, which by then the storm has passed and the people have been helped.  Help get the people home and make it your first priority.

Government surely can help.  After all, nearly 30% of your airfare ticket goes to government and airport fees.

Can’t government and airport use that 30% airline fees (billions!) to help those who are medically needy and stranded in a crisis?   Can the government spare a single plane to transport the medically needy?  One man missed his heart transplant operation. I hear the Transportation Secretary has a plane.  He used his $5,000/hour luxury jet nearly 20 times at great taxpayer expense.  In 2017, the Trump’s Human Services Chief was forced to resign after it was revealed that he took 26 private jet flights funded by taxpayers.  Why isn’t the media calling for Biden’s Transportation Secretary to resign?

This is a public safety and security hazard for airports.

Can not government help by calling the National Guard to assemble a luggage retrieval center where all the luggage is sorted by alphabet?   If not the Guard, then can some of the 30% government/airport fees be used to hire help to alleviate this luggage mess?

I am not sparing airlines one ounce of criticism, but when you are in the middle of a crisis we need our paid government Transportation agents to work with everyone to fix the problem and not waste valuable time just talking about the problem.

POSTSCRIPT: We must mention the fact that all airlines are at their worst right now because of the record-breaking labor shortage.  The Federal government created this historic phenomenon.   Sure enough, certain industries like airlines and health care suffered worse labor shortage because training new hires from scratch is extremely difficult and time intensive.   This is why certain airlines that have for a decade been among the very top in on-time flights and customer satisfaction rankings, suddenly saw their performance ratings plummet when travel resumed.   The labor shortage and federal mandates have disrupted and damaged even the best performing airlines in America.   We need to work together to make these airlines better, because they compete against government-subsidized airlines around the world.

POSTSCRIPT#2: Remember, Transportation Secretary Pete Buttigieg has been pushing airlines to drop their mandatory retirement age for pilots down from 67 to 65.  He is actively making the labor shortage worse.

— Was this helpful?  if yes, please donate online at OregonWatchdog.com (learn about a Charitable Tax Deduction or Political Tax Credit options to promote liberty).