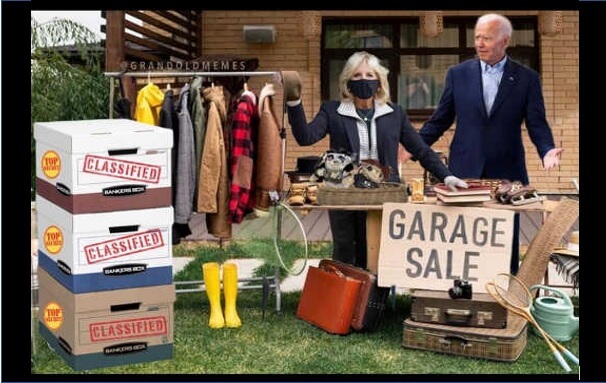 So, what do we know for a fact, today.

Classified documents have been found in at least two locations controlled by Joe Biden.

A private office at his Chinese Communist funded think tank in DC.

And, at one of his homes.

Turns out the second set of documents were in Joe’s garage next to his Corvette in Delaware.

The first documents were found more than two months ago by HIS lawyers and reported to the government.

Did the FBI spring into action with armed raids on Joe’s homes with dozens of agents as they did at Mar-a-Lago just last August.

Instead, the FBI is literally letting Joe Biden’s staff look for the documents their boss illegally possesses.

No conflict of interest there, right?

And don’t forget the UNCLASSIFIED documents Biden’s team found along with the top secret stuff. It’s illegal to take that stuff…exactly the case the Attorney General is now considering for criminal charges against Donald Trump.

He even appointed a Special Counsel to investigate.

He has NOT done that for Biden’s documents.

At least some of the secret documents concern Ukraine…yep, the same country VP Joe Biden threatened with the loss of a billion dollars back when the Ukraine’s prosecutor was investigating the company where Joe’s son Hunter was making a cool million bucks a year as a board member.

And now Joe is using his own dementia as an excuse.