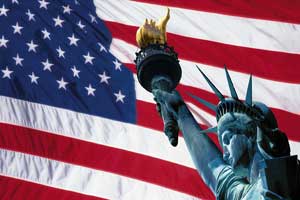 Here are five reasons to love America taken from the essay 10 Reasons to Love America.

5. Generosity
With great wealth comes great generosity. In 2000, Americans gave more than $200 billion in charity, dwarfing the amount donated elsewhere. Since World War II, the U.S. government has given well in excess of $500 billion (not adjusted for inflation) in foreign aid. Last year, our government distributed more than $20 billion to 130 countries. While American taxpayers have a right to gripe, what are we to make of foreign beneficiaries who return our favor by burning U.S. flags and chanting “death to America”?

4. Enlightened
PowerThe Soviet Empire ruled over Eastern Europe. The Ottoman Empire claimed dominion over vast stretches of the Islamic world. The Empire of the Sun sought dominion over the Orient. The American Empire rules…only Americans. America is an historical curiosity. It is the most powerful country in the world, yet it eschews imperialism. Instead, it has used its military might to liberate. Nazi Germany, North Korea, Soviet Russia, Hussein’s Iraq, and Communist Vietnam are among the nefarious states we sought to prevent from increasing their totalitarian control over others. The world is a better place because America, and not some other country, is the sole superpower.

3. Medicine
Will Nigerian doctors make the blind see? Will Cambodians cure AIDS? Will Pakistanis eradicate cancer? The answer is probably not. Why? The reason is that non-Westerners have had no discernable impact on modern medicine. This year, like 45 of the last 60, an American won a share of the Nobel Prize in the field of medicine. Americans cured polio and tuberculosis, developed vaccines for hepatitis B and yellow fever, pioneered modern chemotherapy, and produced the CAT scan and MRI. What’s there to hate about that?

2. Democracy
Leftists harp that American democracy is tainted because not everyone possessed the right to vote at the Founding. Denial of the vote in the 18th century, however, was universal. What made America unique was not that some people could not vote, but that anybody could. More than 215 years after the Constitutional Convention, most people on the planet still do not have a right to vote. Every Arab country, more than three-fourths of African nations, and many of the most populous nations in the Orient still deny their citizens the right to choose their own leaders. Despite the continued rejection by many foreign leaders, the ideals of the American Founding became contagious. Our example served to topple regimes far from our shores. Pro-democracy activists don’t quote the founding documents of Saudi Arabia or appropriate the cultural symbols of China. They cite passages from the Declaration of Independence and hoist replicas of the Statue of Liberty.

1. Freedom
America has shined as a beacon of freedom in an unfree world for more than two centuries. To this day, for instance, most people living outside our borders reside in countries where the private practice of broadcast journalism is illegal and where the state is the dominant banker. Americans can say anything they want, worship any god they choose, and associate with any motley crew around. Our legacy is not slave chains, Wounded Knee, and the murder of James Byrd, but American GIs liberating a Nazi death camp, an immigrant’s first glance of lady liberty’s torch, and Ronald Reagan exhorting the Soviet’s to tear down the Berlin Wall. If nothing else, America means freedom.

What country in the history of the world boasts such an impressive record of bettering the lot of all of humanity? The answer is no country. “Americans need to face the truth about themselves,” Jeane Kirkpatrick once remarked, “no matter how pleasant it is.”