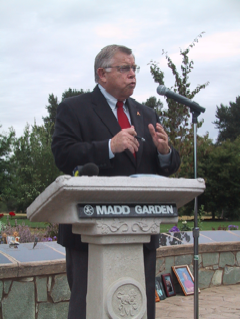 On July 21st, 2007, a ceremony was held to dedicate the MADD memorial garden at the Alton-Baker Park in Eugene. This was the culmination of a long effort by many people including Crime Victims United members Anne and Bruce Pratt and Marie Armstrong, MADD Eugene Chapter founder Barbara Stoeffler, and Eugene MADD director Lois Harvick.

The MADD memorial garden is situated in the Hays Memorial Tree Garden and includes a wall with plaques etched with the names of victims of DUII homicides. There are currently 40 names on the wall including the names of children of Crime Victims United members:

Bruce Pratt designed the wall and the landscaping. $11,000 was donated for the garden, including $5,000 by the Eugene Delta Rotary Club, many in-kind donations from area businesses, and numerous individual donations from the families of victims and other generous people.

Former Eugene Mayor Jim Torrey, whose 16-year-old son Tim was killed by a drunk driver in 1978, was the master of ceremonies. Lane County District Attorney Doug Harcleroad was the featured speaker; he and his son were injured by a drunk driver in the 1980’s. Judy Eakin, the MADD Pacific Northwest Director from Seattle also spoke. 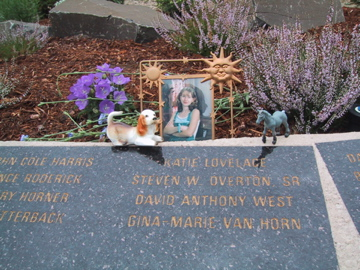