Here are some recent events regarding these measures:

Taxpayers Association of Oregon helps the NO Side

It is under the Military and Overseas Voters’ Guide menu on this website.  The hardcopy county-wide voters’ guide is to be mailed out April 29.  Thanks to TAO for helping provide the other side of the story, allowing voters a more informed decision than otherwise.

No Slam Dunk for the YES Side

I attended the Rose City Park Neighborhood Association’s debate on Measures 26-121 and 26-122, which was held March 30th.  Scott Bailey, a longtime volunteer to the PPS School Board and an economist, debated in favor of both measures.  Patrick Donaldson, a Hollywood District businessman and a member in several local area business associations, debated in opposition to both measures.  Audience comments turned out to be overwhelmingly negative against both measures.  In fact, I didn’t hear even one comment from the thirty to forty folks in the audience that sided with PPS and its measures.

According to Donaldson, the YES campaign plans to target a certain segment of voters and exhort them to the polls to vote yes on both measures.  The assumption by the YES side is the special election will have low turn out favoring their targeted segment strategy.  This segment is thought to be twenty to thirtyish old voters with children.  Interestingly enough, the one member of the Rose City Parks audience sporting this demographic actually sounded very negative about both measures.  Nonetheless, I would say the NO side definitely has an uphill battle as, according to Donaldson, the Yes side has some $700,000 in campaign funds.  Some 30% of these funds were raised from out-of-state construction firms, who no doubt eye potential profits from Measure 26-121.  By comparison, the NO side has nickels and dimes.

I asked Scott Bailey (YES side) during the debate two basic price metric questions concerning the two measures.  One, how much is the cost per square foot to rebuild either Roosevelt High School or Cleveland High School?  Two, how much is the cost per teacher retained per year with the operation levy?  He had no answer concerning the first basic question (and I note these two school rebuilds alone have a budgeted cost of over $160 million or almost 30% of total Measure 26-121 funds).  The second question he answered with some hesitancy suggesting a cost of some $85,000 per teacher retained per year.  However, this suggested number doesn’t seem to comport with the average cost I calculate seeing how PPS states it will save 200 teacher jobs at a cost of $19 to $21 million per year; using the latter figures indicates a teacher cost of $95,000 to $105,000.  PPS seems to be budgeting maximum compensation levels for low seniority teachers (otherwise targeted for layoff).  Such teachers normally earn quite a bit less than $95k in total compensation.

Local area economist Eric Fruits says: “The increased tax burden the district hopes to impose will lead to even more Oregonians losing their homes.  Recent research from the Kansas City Fed suggests that the proposed property tax increases may trigger 1,000 or more foreclosure filings.” Fruits made this comment as an Oregonian guest columnist, January 12, 2011; as reprinted on the website, Stopthebond.blogspot.com.

I update the graph of property tax burden below for the cost impact of Measure 26-122.  If both 26-121 and 26-122 pass, this coming November’s (2011) total property tax bill will increase about 17% from last year’s (2010) bill.  For the average TAV home, this represents about $650 in additional property taxes.  Note:  The average home in the PPS district has a tax assessed value (TAV) of $178,300 as of the current year with the TAV increasing 3% to about $183,500 next year (per PPS e-mail response).  But the District is choosing to use the median concept instead of the average (arithmetic mean) concept in its cost calculation.  The median TAV is significantly lower at $147,500 this year.  Unfortunately, many voters confuse the two as equivalent concepts when they are not.  Moreover, most voters relate to the average concept but don’t clearly understand the median concept. 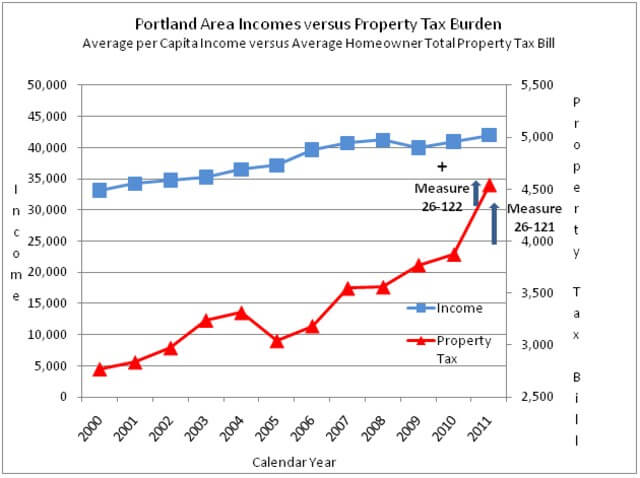