by Bob Clark for the
Taxpayer Association of Oregon

Portland Public School District (PPS) residents will be asked May 17, 2011, to approve Measure 26-121, a mega sized school construction bond and property tax measure.  I urge residents to vote no on this measure.  This measure increases home owner and renter costs too much, particularly at a time when local area incomes languish and social security checks remain frozen (going on two years now).  This measure, in and of itself, would cause total property tax bills to increase over 9%.  This measure and previous measures approved would cause next November’s property tax bill to increase by over 13%, making it the highest increase in the past ten years.

Measure 26-121’s explanatory statement (http://www.co.multnomah.or.us/dbcs/elections/2011-05/26-121.pdf) is misleading.  The Measure’s cost for the average home is nearer $400 per year than $300 ($2 rate multiplied by 178.3 average taxable assessed value multiplied by three percent compound annual increase in taxable assessed value).  Moreover, this measure is only the first of several follow-on measures planned by PPS after this measure’s six year term expires.

The PPS District has for too many years used its maintenance budget for teacher compensation, rather than keeping school buildings up to date.  Nearly 19% of all District employees make over $100,000 per year in total compensation (Oregon Capitol News).

Most of Measure 26-121’s actual school construction dollars is targeted for only three high schools located east of the Willamette River.  Most west side Portland residents must wait numerous years and voter approval of follow-on measures to benefit from school remodeling.

I urge citizens to vote no, and effectively tell the District Superintendent and School Board to better manage the cost of school renovation so as to soften the obvious financial stress they aim to impose on both homeowners and renters.

The following is statistical background, weighing against the PPS Construction Bond Measure. 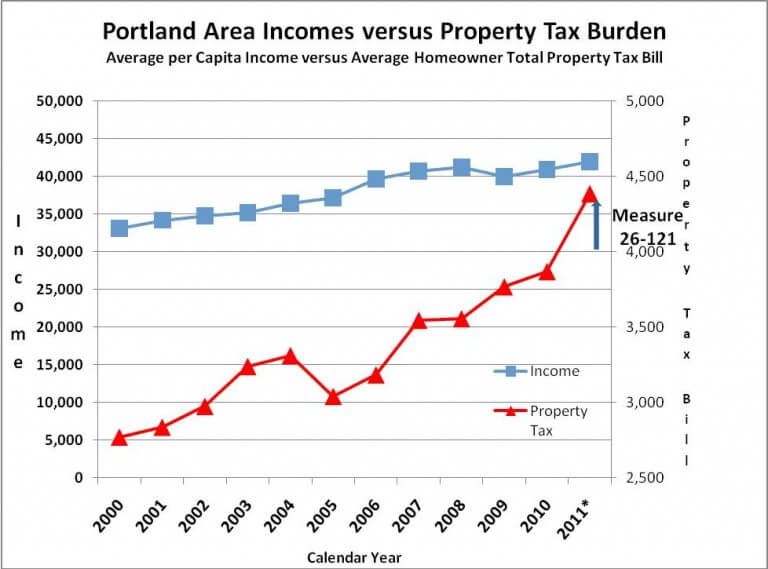 The above chart shows Portland area incomes have increased at between 2 to 2.5 percent per year over the past ten years with incomes more recently stalling with the 2007 to 2009 recession.  During this same ten year period, Portland area total property taxes have increased nearly 3.5% per year.  So, even up to Measure 26-121 there is a slow squeeze on local area incomes from property taxes.  But Measure 26-121 would cause a sudden acute squeeze.  It is hard to imagine senior citizens and retirees who have seen their social security and pension checks frozen for the past two years not struggling to come up with another $400 to $500 per year for PPS (PPS is now seriously looking at adding another May ballot measure which would increase property taxes another 74 cents per thousand dollars in taxable assessed value).  This chart’s data is pieced from U.S Bureau of Economic Analysis’ per capita income estimates for Multnomah County and Portland Metro Area; State of Oregon’s Office of Economic Analysis (* 2011 state wide forecast); and Portland Maps historical property tax data for average (taxable assessed) value home. 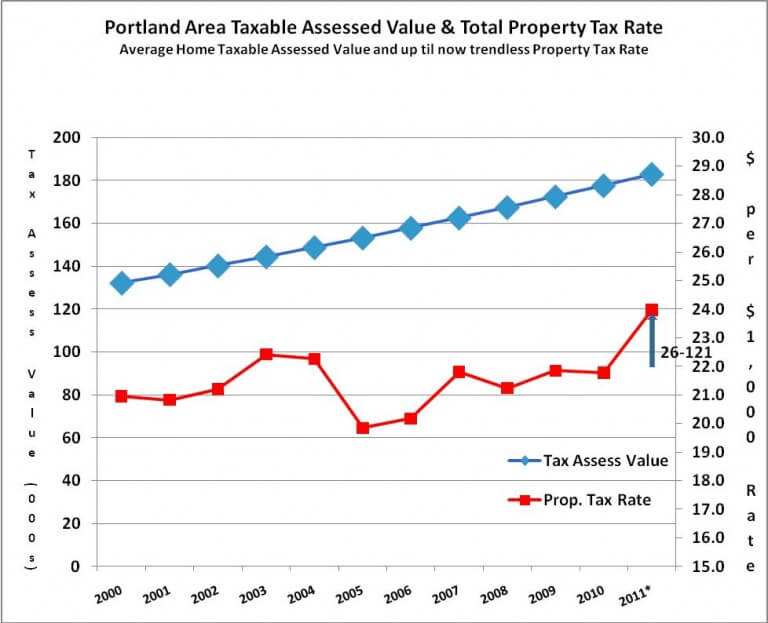 This chart shows property tax rates have been fairly well contained over the past ten years, but that Measure 26-121 would represent a rather oversized break above the historical norm for total tax rate.  The legacy of Measure 50 and related measures already lock in a 3 percent increase per year in total property tax bills, when tax rates are stable.  But Measure 26-121 would break from such stability. This chart is compiled from Portland Maps historical property tax data for average (taxable assessed) valued home (* extrapolating 2010 tax rates forward to 2011, escalating taxable assessed value by the standard three percent, and including the cost of two new Portland area measures approved in November 2010 along with the cost of Measure 26-121 if it were to pass).