2009-11. The revenue forecast for the current 2009-11 biennium decreased $49 million. As depicted in the following graph, this is the tenth reduction since we ended the last legislative session in June 2009. Yesterday’s $49 million reduction means Oregon has lost $1.2 billion of the revenue it expected to receive during the past two years. 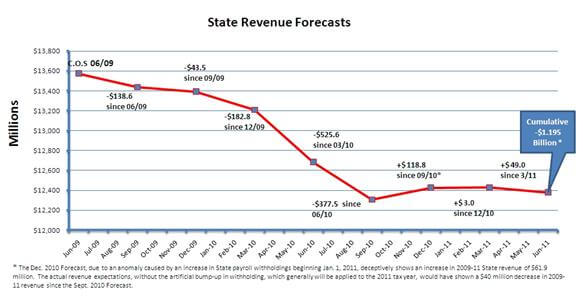 2011-13. Notwithstanding the reduction of $1.2 billion in forecast revenue in the past two years and $49 million in just the past three months, yesterday’s revenue forecast for the near future (2011-13 biennium), is much more optimistic. For 2011-13, we are told we can anticipate a strong economic recovery that will reverse the downward trend.

Yesterday’s forecast predicts a $127 million increase in tax revenue over what was forecast only three months ago. In sum, the 2009-11 forecast has decreased to $12.38 billion, while the 2011-13 forecast has increased to $13.90 billion. Thus, although the State has lost $1.2 billion of expected revenue in the past two years, it expects to gain new revenues of $1.5 billion in the next two years. Happy days…? Don’t bet the farm just yet.

So which direction is Oregon’s economy really going? Will we continue the $1.2 billion downward slump depicted in the 2009-11 graph above, or are “happy days” really here again? How reliable is the forecast of a $1.5 billion recovery for 2011-13?

As one of the three Co-Chairs of Ways & Means, I can assure you it is easier to spend hoped for money than it is to downsize agencies, programs and expenditures. In truth, we are still struggling to balance the 2011-13 State Budget. The additional $127 million in yesterday’s forecast was spent even before we knew the actual amount of the uptick.

The answers to questions about Oregon’s economic future are not likely to come from learned theorists, economists or prognosticators. The answers will depend on an honest recognition of Oregon’s true economic condition, and a unified effort to develop and implement a new plan to restore Oregon’s prosperity.

How Does Oregon Compare With Other States?

If Oregon is doing as well as the other states, then the citizens of all 50 states are in this mire together and must merely ride out the Great Recession. Such is not the case. The Oregon Transformation Project (OTP) has compiled hundreds of Oregon state agency budgets on one website for every interested Oregonian to review. In the past eight months OTP has received hundreds of suggestions and comments from concerned Oregonians across the state on how to transform Oregon into an economic leader.

Analysts at OTP have recently provided the following data about Oregon’s competitiveness as contrasted with other states:

According to a recent Chief Executive survey of 550 CEO’s who were asked to grade and rank states for their business environment based on a wide range of criteria including taxation, regulation, workforce and quality of living, Oregon ranks near the bottom (#33) for maintaining a business-friendly atmosphere.

Texas has held the #1 position since 2005, based on consistent pro-business state policies/regulations, overall attitude toward the business community and work ethic of its population.

Indiana, Wisconsin and Louisiana have made the most significant gains since 2010 after implementing statewide policies that foster private sector growth.  In reshaping their frame of mind toward the role of business in their states, they have set themselves on a path of economic growth.” (Click here.)

Oregon has dropped ten full spots in the national ranking of per-capita income since 1990. In 1990, Oregon was 22nd in the country. We now rank 31st. Meanwhile, our western neighbors have barely budged – California is 10th and Washington 12th. Clearly, things do look different in Oregon – and it’s not bringing us prosperity.

The first lesson for a ditch digger working in the wrong place is: Stop digging. Economically, Oregon is in the wrong place. We are decreasing in wealth. Our people earn less than neighbors in other states. We have lost our competitive edge. Oregonians’ dependency on food stamps (SNAP) and other government programs has increased dramatically.

How have our leaders responded? Unfortunately, the most widely known story about Oregon is how we raised taxes on our businesses and the people who own them. But here’s a fact that every legislator knows: Poor people do not create jobs. Poor people seek employment from businesses owned and operated by wealthy people. Yet as the OTP analysts demonstrate above, Oregon’s ability to compete with more business-friendly states is steadily declining.

Precious little has been accomplished this session, in my opinion, that will result in greater prosperity, self-reliance and success for our unemployed constituents across the state. Consider the power and potential for transforming Oregon’s economy if a committed coalition of Oregon’s legislators were to unite in a common cause, without consideration of party or politics, and join forces to remove existing barriers to economic growth and prosperity.

This newsletter is an open letter to my colleagues in Oregon’s House and Senate. We have been in session four months. We got elected by promising to do something to create JOBS, JOBS, JOBS. Yet, what have we done to help make Oregon a more “Jobs-Friendly” state?

One strategy is to promote the prosperity and expansion of Oregon’s small businesses—those already here and operating. We members of Oregon’s legislature can help develop and implement a new plan for prosperity based on non-partisan principles focused on creating a business friendly environment. There are 90 Senators and Representatives representing every part of our state. We understand our districts and know our constituents.

Please consider the following proposal and at the end of this newsletter, feel free to share your ideas, suggestions and comments for me and for Oregon’s other 89 legislators. I will share your comments with all of my legislative colleagues.

1. Private enterprise creates prosperity, not the government;
2. Prosperity and an expanding economy create jobs, not the government;
3. When businesses grow and expand, new jobs are created;
4. Planning for prosperity requires clearing away the barriers blocking business expansion.
5. Partisan politics have no place in times of economic crisis.
6. Now is not the time to blame for past mistakes.  Now is the time for creating a brighter future for Oregon.

1. Assess
a. Each legislator will identify 6 businesses in his/her district that may be ripe for expansion.
b. Each legislator personally interviews and builds a relationship of trust with the owners/CEOs.
c. Working with owners/CEOs, dentify specific barriers to business expansion and benchmarks to gauge success.

This proposal is an attempt to start a conversation, to set a new direction. “More of the same” cannot be Oregon’s motto for prosperity. Either we legislators join together, evaluate what has and has not worked for Oregon in the past, then develop a strategy for action to improve our economic advantage, or we are cursed by our own intransigence.

If not now, when? If not us, then who will do it? If you have thoughts on Oregon’s Plan for Prosperity, please share them with us. (Click here.)