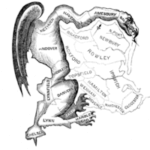 Democrats break agreements, attempt to keep their plans hidden from the public

Two rare events occurred simultaneously in the past six months that may never realign again in the State of Oregon. The confluence of Tea Party forces, the US Census and the fading of the Obama wave led to redistricting at the state and federal level being handled by a 30-30 R-D split in the Oregon House (erasing a supermajority for the Dems) and a 16-14 D-R advantage in the Oregon Senate (down from another supermajority). This created a unique opportunity to legislatively redraw Oregon’s political map for the first time in 60 years.

Ah, but the devil is in the agenda … errr … details.

Each district, as nearly as practicable, shall:

• Be of equal population;

• Not divide communities of common interest; and

• Be connected by transportation links.

For instance, Portland is a very strong community of interest that is unique in Oregon. Most of the rest of the state feels that Portland’s interests do not match their own, and yet Portland seems to drive most of the political agenda for the state. Portland contains 15% of the population of the state, but three of our five congressional districts contain parts of Portland. That’s right, Portland has 3 Congressional Representatives. So it’s clear that better fidelity to the statute is required this time around.

The bipartisan committee started off right. They held field hearings across the state in April to get testimony from as many citizens as possible. The overwhelming consensus of those who testified was that Oregonians do NOT wish to split up communities of common interest.

Fast forward to last week. According to Rep. Shawn Lindsay (R-Hillsboro), co-chair of the House Redistricting Committee, the plan between the House Democrats and Republicans was to exchange preliminary proposals on Thursday, May 5, have the weekend to review and come up with feedback, meet on Tuesday, May 10 and finally release each plan for both legislative and congressional boundaries on Wednesday the 11th.

That was until the Democrats decided to try to blow up the negotiations.

Rep. Lindsay reports that when the committee met to hammer out the details on May 10, the Democrats unilaterally announced that they were not going to release their congressional plan, as both parties agreed they would do simultaneously, and would only release their legislative plan. When reminded by the Republicans that they had agreed to work together and conduct a joint press conference to release both plans for both legislative and congressional maps, the Democrats said, essentially, this is how we’re doing things now. Rep. Lindsay reports that the Democrats only backed down when asked directly if they were unilaterally leaving the negotiating table. ONLY WHEN FACED WITH BEING DESCRIBED PUBLICLY AS THE PARTY THAT QUIT THE BIPARTISAN NEGOTIATIONS DID THE DEMOCRATS BACK DOWN AND ADHERE TO THE ORIGINAL AGREEMENTS.

That wasn’t the Democrats’ only gambit.

According to the shamefully sparse news coverage of the press conference fiasco this week, the House Democrats weren’t done:

SALEM, Ore. – Lawmakers in Salem are getting their first look at maps that could shape their political careers. Democrats and Republicans released competing plans Wednesday to redraw political boundaries in Oregon. Even the announcement had its own share of drama.

Need proof that redistricting is a touchy subject around the capitol? While Democrats were holding a press conference to describe their maps, a Republican lawmaker burst in complaining that Democrats had jumped the gun.

Sen. Chris Telfer (R-Bend): “We don’t have a press release out yet and this is what’s going on?”

Yes, that’s right, after trying to cut the negotiations off at the knees, the Democrats moved forward with their own press conference, without including the Republicans as agreed. Trying to get out in front of the story – a pathetic attempt at obfuscation.

But here’s the worst part – the Democrat plan is the epitome of gerrymandering.

Check out the two maps released for congressional redistricting:

So, just taking the CD 3 proposal from the Democrats – they are actually trying to peddle the idea that Columbia, Multnomah, Clackamas, and Hood River counties constitute a “community of common interest”.

That’s really more reasonable than the Republican idea of CD3 constituting Multnomah County and a small portion of Clackamas County to make the population numbers match?

What does Portland have in common with ANY other part of Oregon?

There could be no more obvious attempt at gerrymandering. In fact, I think it’s obvious that the Democrats have one goal in mind – to torpedo the process, reach a stalemate, and end up with the legislative portion in the lap of Kate Brown, who will be tasked with “Brownmandering” when the inevitable happens; and with the congressional portion in the heavily Democratic courts.

Jeff Reynolds is the Chair of the Multnomah County Republican Party, and ran this originally on Red County. This version reflects edits & updates made since then.