Docs 4 Patient Care is an organization of physicians committed to creating a health care system that preserves the sanctity of the doctor-patient relationship, promotes quality of care, supports affordable access to all Americans, and protects patients’ freedom of choice. Notably, Docs 4 Patient Care is opposed to PPACA (“Obamacare”); unlike the American Medical Association (AMA). The AMA’s support of Obamacare motivated Dr. Hal Scherz, a prominent Atlanta physician, to found Docs 4 Patient Care. The AMA actually represents less than 20% of all physicians in the United States.

The Docs 4 Patient Care Annual Meeting ran November 2 – 4, 2011, and included meeting with members of Congress (“House Calls on Congress”) and an update from the Heritage Foundation on the fight against Obamacare. During the House Calls on Congress, Dr. Rosenbloom got the chance to meet with Rep. Allen West (R-Florida). 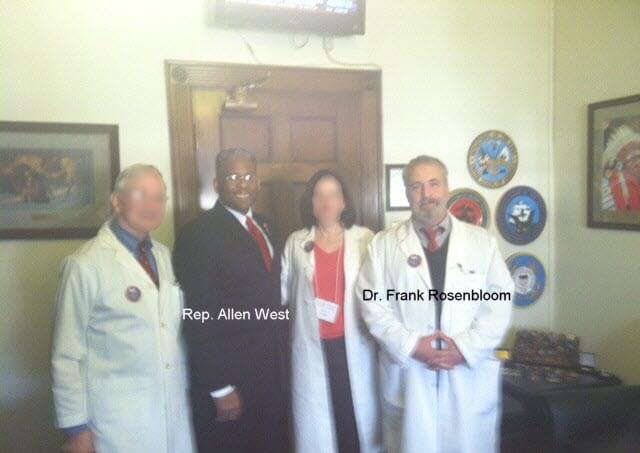 While at the conference, Dr. Rosenbloom learned that an opinion piece he’d written had run last summer in the Washington Times. The opinion piece was on a Department of Health and Human Services (HHS) plan to spy on doctors.

The Docs 4 Patient Care web site is worth visiting. For example, they have the mind-numbing Diagram of America’s New Healthcare Bureaucracy, as well as a very daunting chart showing the Expanded Powers of the HHS Secretary under the PPACA (“Obamacare”).

Frank S. Rosenbloom M.D. is a practicing physician and president of the Docs 4 Patient Care Oregon chapter. He has been a guest writer for the Cascade Policy Institute, and a frequent contributor at American Thinker. Follow Dr. Rosenbloom on his blog:  Summa Contra Improbos et Plumbeos.