President Barack Obama and supportive members of Congress were able to get the Patient Protection and Affordable Care Act (ObamaCare) passed, in part by extolling the virtues of the Canadian health care system. In speech after speech, Obama has touted the alleged lower cost, “universal coverage” and better medical care of that system. All of the mentioned supposed benefits are untrue, but the most disconcerting fact is that Mr. Obama has never discussed any deficiencies of the Canadian system.

Other influential people have shared their concerns about the serious deficiencies in the Canadian health care system. Perhaps the most important of these is the man some call the ”father” of the Canadian health care system, Claude Castonguay. Although several provinces had government involvement in health care from 1946, Castonguay was the pioneer of socialized medicine in Quebec, which gave impetus to the establishment of a nationwide socialized medical care law in 1966.

Let’s review the facts. The Canadian health care system was established in the 1960s, when the government was spending like a drunken sailor trying to promote economic growth. Sound familiar? The assumption was that the economy would grow at a predictable rate and that the system therefore would be affordable. However, Canadians made the same fundamental mistakes governments always make when establishing entitlement programs; that the economy would act predictably and that the program’s costs would grow in a predictable linear fashion. These two assumptions have proven to be incorrect in all cases, as they were in establishing our ownMedicare system.

Health care reform has been a serious issue in Canada for over fifteen years, as the financial burdens of socialized medicine have put increasing strain on resources. Canadian media regularly trumpets fears about escalating health care costs. Furthermore, since accurate statistics are kept only on government spending, substantial hidden costs are associated with that system. Some Canadians are even breaking the law by opening private clinics to relieve a system that is imploding. One significant reason the Canadian system has lasted this long is the safety valve provided by the U.S. system, where Canadians can receive timely care at a fair price. Yet, if you believe President Obama, the Canadian health care system moves along like a well oiled machine. 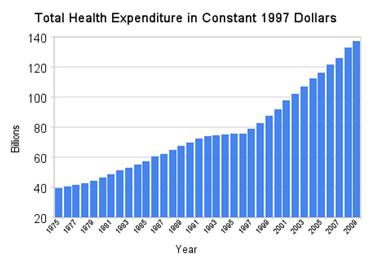 The graph shows total expenditures in constant 1997 dollars. A quick review shows Canadian health care costs rose about 240 percent from 1996 to 2009, by which time they actually exceeded $180 billion.

By contrast, the rise in U.S. health care costs can be reviewed below. 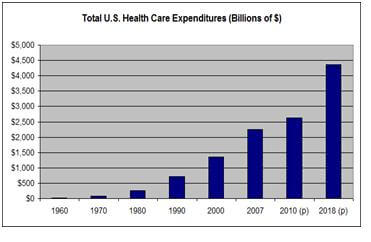 We see that in 1996, U.S. health care spending was about $1 trillion. By 2009 it had reached about $2.4 trillion, which is an increase during that period of about 240%. Now, wait a minute! The rate of rise of Canadian health care costs is really no lower than ours? Yes, President Obama, (and Governor Kitzhaber), there is no Santa Claus, and no Shangri-La. The often reported, widely disproportionate cost increases between the Canadian and the U.S. health care systems are a myth.

Statistics can be adjusted to promote a particular ideology, as was seen by the graph above adjusted to constant 1997 dollars and the addition of the “projected” 2018 spending in the U.S. graph. Despite these difficulties, the truth about the Canadian health care system and socialized medicine is available to anyone who diligently studies the matter. Unfortunately, many Americans have relied on liberal politicians for their information, and nothing but higher costs and lower quality medical care will be the inevitable result. If we really want costs to decrease while maintaining quality health care, we need real free market reform before the inevitable complete collapse that will occur nationally under ObamaCare and the disaster that will befall Oregon under Gov.Kitzhaber’s reform proposals.