Increases in social safety net spending are to be expected during a recession. It is then intuitive to assume the spike in food stamp use in 2010 that the US Census recently reported a couple weeks ago was caused by the economic downturn. Most states’ food stamp participation rate correlates with its economic performance, but not Oregon’s. Take a look at this map that colors states a darker shade of red proportional to the percentage of their population on food stamps. 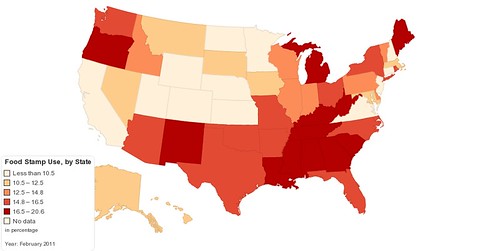 If all one knew about regional variations in the US economy came from this map, then one would think Oregon’s economy was devastated far worse by this past recession than Nevada when in fact the opposite is true. In 2010 Nevada saw the use of food stamps grow at the alarming rate of 48%! This was double Oregon’s growth rate in the same year, but brought them nowhere near Oregon’s food stamp dependency.

There were many states with far worse local economies than Oregon’s last year, but we led the nation in food stamp use at 18%. While our state economy has slightly improved in 2011, food stamp consumption continues to increase. We are on track to end the year at 20% meaning that 1/5th of our population eats at the taxpayer’s expense while only 1/10th of our state is unemployed.

To see just how much we deviate from the correlation between state economic performance and food stamp enrolment, let’s compare the percentage of each states’ population on food stamps with two economic metrics: unemployment and median household income. 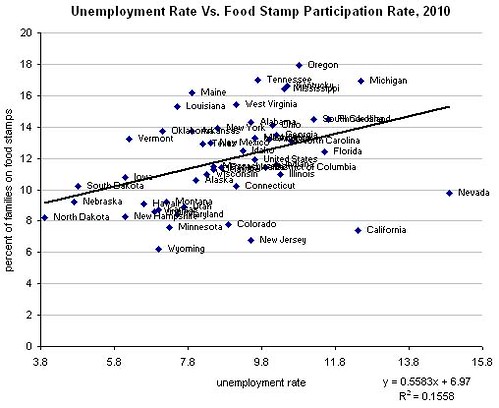 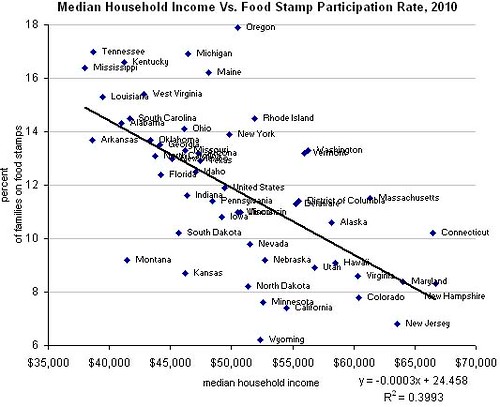 This data is rather shocking when seen for the first time, but Oregon has been providing free groceries to more than just poor families for quite some time. We were one of the first states to adopt a debit card like payment system, called the Oregon Trail Card, removing much of the stigma for receiving public assistance. 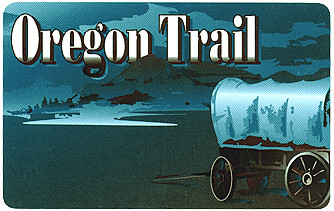 Most states place some restrictions on the ability of young single people from applying for food stamps. Not Oregon, much to this local college student blogger’s delight. (http://seanpdx.wordpress.com/2009/06/23/ridin-the-oregon-trail/) With the ability to spread the word via social media, you would be surprised how quickly the ubiquitous Oregon Trail Card began subsidizing snack food in our college dorms, and even 20 somethings living at home playing video games for a living. Money being fungible, it subsidizes a lot more than food.

I first became aware of this trend anecdotally when Portland State University’s cafeteria began accepting debit cards. When downtown I like to eat there, but was frustrated by how long it took them to get a card processor. When they finally did, the cashier explained to me that the school had to make the switch because so many students have been dropping the meal plans in favor of food stamps. The only way to retain their business was to allow students to pay with their Oregon Trail Cards. Hooking their students up with federal money as a form of consumer finance being such a core competency of most Universities these days, perhaps we ought not be surprised by this page from PSU’s website. (http://www.pdx.edu/healthycampus/nutrition-its-snap)