Filled with charity, we Americans voluntarily give to those in need at a higher rate than any other society. I’m feeling charitable, and progressives find themselves more than a little needy when it comes to arguments against the Keystone pipeline so I would like to supply them with one: property rights. The Keystone pipeline leans heavily on the Kelo v. City of New London expansion of eminent domain to support private economic development. The Sierra Club and the Environmental Resources Defense Council are throwing their vast legal resources in the defense of a Texas farmer that is facing the condemnation of her family’s property to force the sale of an easement to TransCanada. If these environmental groups were able to delay the Keystone pipeline by overturning Kelo, that would be change I can believe in.

Last week I pointed out what a no-brainer the Keystone pipeline is on its merits as a fountain of wealth and job creation with negligible negative externalities; not once did I mention the price of gas. The pursuit of the “right” price of any commodity should not be the aim of policy makers. So I cringe when I hear this touted as an argument.

Price stability for the macroeconomy should concern policymakers very much, but I cannot help but remember that most Republicans were happy when the Fed was devaluing the dollar ten years ago. Only now when the Fed does it for a Democratic president do we hear much outcry. It is important to note that domestic demand for gas far outstripped our growth in domestic supply in the 1990s yet prices remained rather stable until the Fed began its bold countercyclical moves in 1998 for the collapse of LTCM, in 1999 for that irrational fear of the Y2K bug, and every two years that followed another rational for maintaining a loose monetary policy always popped up. The behavior of traders of oil as a commodity and traders of the dollar which is also a commodity has been determined by our monetary policy. Its affect on the long-term price of petroleum products like gasoline has been predictable: 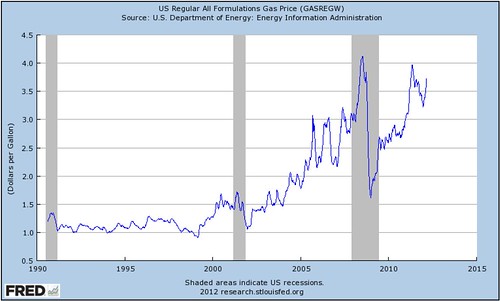 Oil is and will remain a valuable global commodity. Even under a more sound monetary policy, there are no guarantees its price will not grow faster than inflation. No one has a human right to low gas prices. When Newt Gingrich panders to southern voters who feel entitled to $2.50 a gallon gas, he continues to reveal his Nixon-like disregard for free markets when the futile attempt to control them will buy him a vote. Perhaps this is why Newt seems to attract support from the buffoon wing of the Republican Party:

What do you suppose a President Gingrich would do upon the discovery that after having maxed out our domestic oil capacity, the price of gas at the pump did not budge because the producers of refined product exported it to meet demand abroad rather than depress prices at home? Perhaps he would take advice from the likes of Bill O’Reilly:

Perhaps Rush Limbaugh would chime in, calling the oil companies prostitutes. To prove it’s “looking out for you” I could see a Gingrich administration banning petroleum product exports. When this simply disincentivizes the exploitation of the very domestic production they were eager to authorize, I could see him reverting to price controls too.

Why beat a dead horse like Newt Gingrich? Though he was as much a loser at the beginning of this presidential primary as he was last Tuesday, he speaks for a constituency in the Republican Party that Nixon tried to cultivate with his southern strategy. I have twice been a delegate to the Oregon Republican Party’s state conventions, and I observed we have more than our fair share of these people in the Union State. These voters cheer applause lines that speak of a free enterprise system, and then equally cheer when private equity firms are denounced as “vulture capitalists.” These are the kind of people that show up to Tea Party rallies with signs that say “get your government hands off my Medicare!” 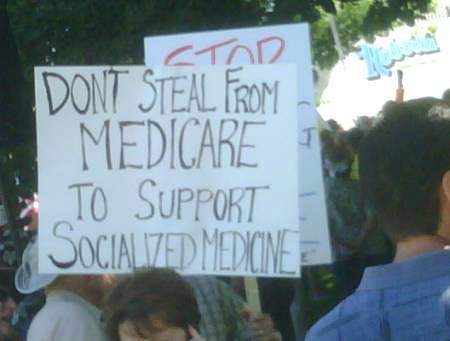 America desperately needs a strong GOP with a coherent philosophy of liberty. For many folks out there, I think it’s time to turn off the Fox News and crack open a few books. Start with John Stewart Mill’s On Liberty. Read Ludwig von Mises’ Human Action, and Friedrich Hayek’s The Constitution of Liberty (particularly his last chapter). Otherwise, I’m afraid we’ll continue to get the candidates we deserve.