Don’t act like I never told you. Like supplicants on bended knee before the Sanhedrin, community members filed past the Portland Public School board members this week to beg indulgences and plead with them to spare sports, teachers, Outdoor School and schools themselves.

But they’re really asking the wrong questions. They should be asking why the board isn’t fighting the Grand Theft of their programs by Portland’s Professional Planners, chief among them, “Education Mayor” Sam Adams. They should attend today’s City Council meeting and ask why the City is stealing from the schools.

And they should ask why the school board and Superintendent Carole Smith has bought into establishing SEVEN NEW urban renewal areas that will cost schools tens if not hundreds of millions of dollars in the future.

Portland Public Schools have lost out to MILLIONS of dollars in the past decades because of Urban Renewal and Tax Increment Financing schemes. (See my previous posts on this “Cash for Cronies” here, here, here, and here, here.) And from 2010 to 2015 it’s estimated that PPS will LOSE $163,000,000.00 to the eleven currently existing urban renewal areas (URA). See the numbers from the Portland Development Commission below.

Now the Portland City Council is getting ready to approve seven new urban renewal areas which will take money away from schools, police, fire and libraries. In order to accomplish this, the council has bought off community groups with promises of micro loans, painting businesses and sprucing up areas (see list below) with pretty signs and “street furniture” (read: benches). But these six “Neighborhood Prosperity Initiatives” as they’re laughingly called aren’t the main event. The main event is the urban renewal area called the “Education URA.” 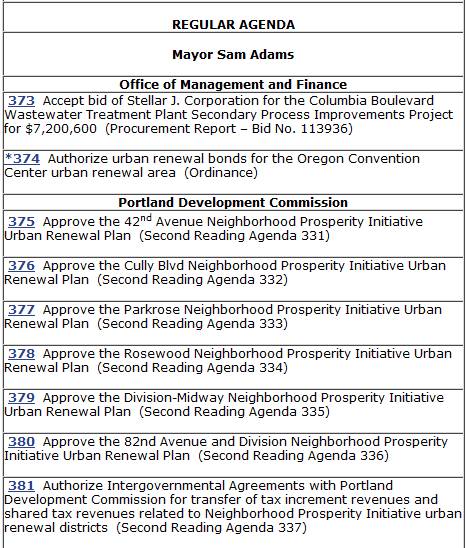 It’s so outrageous that even Multnomah County Chair Jeff Cogen calls it “radical.” He’s been bought off, though. The County will get a new human services building out of the deal. PSU and Adams will get the Sustainability Center (and student housing) and Multnomah County tax payers will pay for them, while at the same time, scream about why there’s not enough money to run schools, libraries and pay our cops and firefighters.

Where does the money go? Look at your tax bill. From the website “Debunking Portland”:

Here is a real list of real dollars taken from schools & basic services to give to the urban renewal whores: