Yesterday’s article on Ron Paul supporters appears to have had an effect on the Oregon Catalyst gubernatorial poll over on the right. In just a day and a half, the poll has moved from Allen Alley leading by 15 votes to “Someone else” leading by 52 votes. The top three vote getters were 1) Allen Alley, 2) Someone else, and 3) Greg Walden. 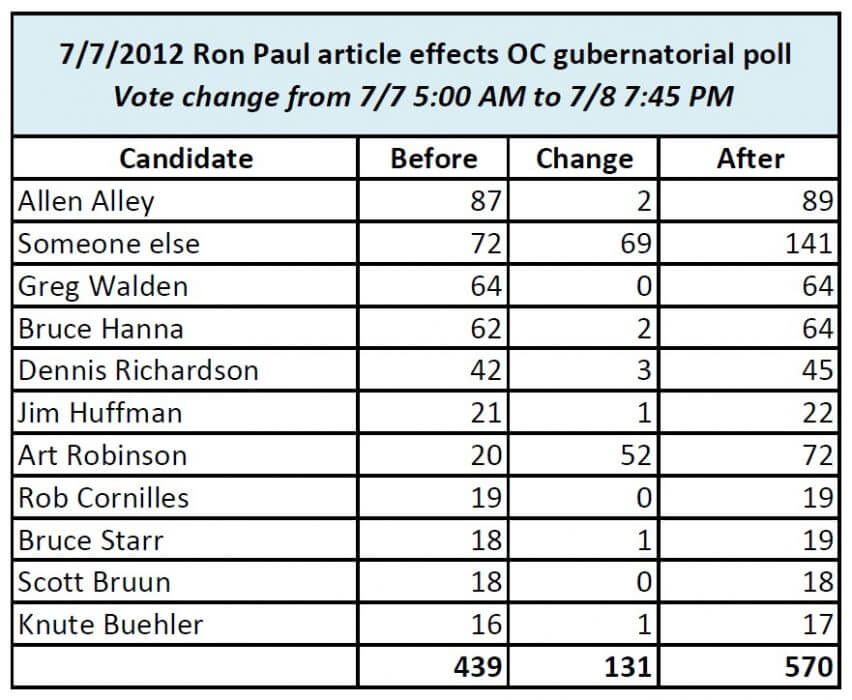 A commenter on yesterday’s article, Oregon Catalyst contributor Eric Shierman, noted “[Allen] Alley was in the lead before this article began attracting so many [Republican Liberty Caucus] folks to the Oregon Catalyst. You are right in pointing out that some of these new Catalyst readers have been participating in the poll, but what they have done is pushed ‘someone else’ into the lead”.

The vote count as of 7:45 PM Sunday had shifted 131 votes, and the top three vote getters had changed to 1) Someone else, 2) Allen Alley and 3) Art Robinson. Art Robinson is a liberty candidate who is endorsed by Ron Paul.

The Oregon Catalyst gubernatorial poll has been open since May 18th, 2012.