I have been in Hawaii for the past two weeks doing research on my next book project and of course having a little fun in the sun. I made several discoveries along the way. This book being about the Second Battalion Third Marines during the Tet Offensive, I attended the annual reunion of the 2/3 Vietnam Veterans Association in Kona; later I also attended a gathering of the descendents of Wayne Hayes and his surviving fellow 2/3 veterans for the unveiling of his painting at the new Staff NCO Club at Camp Kaneohe Bay, home of today’s Third Marines.

You can read the back story of this painting here. You can also read the Camp Kaneohe base paper’s account of this reunion here.

On February 28, 1967 Sgtmaj Wayne Hayes was killed in action alongside his battalion commander on Operation Prairie II northwest of Cam Lo in Quang Tri province of the Republic of Vietnam. His daughter Deborah was only days away from her 8th birthday at the time. The pain she has endured all these years from the loss of her father at such a young age was revealed at this solemn ceremony. As I listened to her speak, I could not help but think of the many other young girls who now find themselves in a similar situation, their fathers having fallen in Iraq and Afghanistan. The costs of these wars will be felt forty years from now. When historians and foreign policy analysts assess the fleeting benefits of our invasion of Iraq with its considerable monetary costs, it is doubtful they will be able to include in their analysis the emotional damage imposed on the children of the dead.

I was looking forward to meeting today’s Marines of 2/3, but they are currently deployed. We were all graciously hosted instead by the Third Marine Regiment’s commanding officer Col. Nathan Nastase and regimental sergeant major Sgtmaj Justin Lehew which included a detailed brief of the Third Marines’ pivot from the Middle East to Asia and an uplifting account of the Marines Corps’ more successful efforts to combat PTSD and suicide, having learned lessons from the Vietnam Era that apparently today’s US Army has not. Perhaps it is the smaller size of the Marine Corps or even its unique culture that emphasizes mental preparation for combat beyond mere technical training, but the growing rate of suicide of US soldiers is a closely watched trend at Marine Corps Base Hawaii, which has its own Wounded Warrior Battalion specializing in more than just counseling and physical therapy. Great efforts are made finding civilian job training and internships for disabled Marines, sending them on a path towards a career they can be proud of before they are medically discharged. We also got a tour of the base by Gunny Vaughn who leads 2/3’s rear party and a masterful presentation of current weapons, tactics, and high tech training facilities by Gunner Law, a Portland, Oregon native. 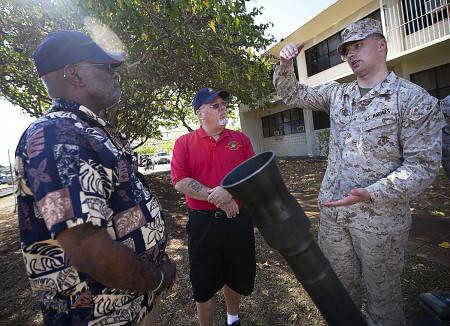 For those of you who don’t know, “gunner” is a unique infantry warrant officer billet in the Marine Corps that serves as a weapons and infantry tactics specialist at the battalion, regimental, and division levels. As the Infantry Weapons Officer for the Third Marine Regiment, Gunner Law gave us an authoritative look at today’s Marine infantry.

Here are some things that I learned. First, I was very surprised to discover that the M249 SAW (squad automatic weapon) is being phased out in favor of a fully automatic M16. To give you an idea of the difference in size, here I am as a young Marine with an M16A2 in my lap and one of my buddies’ SAW is sitting next to me. 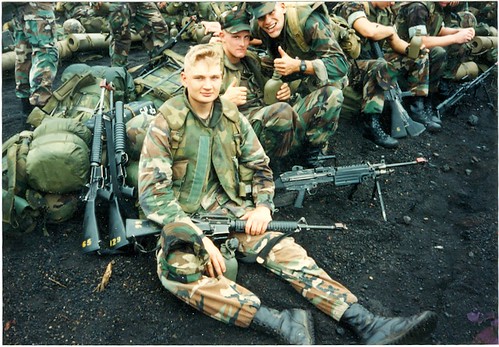 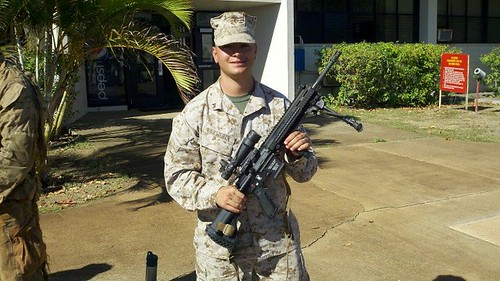 Why the change? As any former SAW gunner will tell you, the M16 is much lighter, but according to Gunner Law, the tactics are changing too. The Marine Corps wants to get away from that suppressive fire / fire superiority use of automatic weapons that first emerged with the introduction of the M16 in April 1967 in Vietnam and was still present in my day with the even faster firing SAW with its belt fed drum of 250 rounds. They want to return to a more accurately aimed approach to a firefight to save ammunition and reduce collateral damage.

In another surprise, the old M72 LAAW is making a comeback. In my day, it had been phased out because its warhead was too small to penetrate modern armored vehicles. We carried the more powerful but heavier and bulkier AT4. To get a look at the difference, compare the AT4 resting on the table of their static display, with the LAAW resting on the deck to its right. 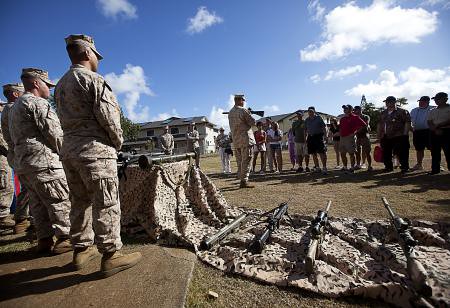 In a situation where the enemy does not have any tanks, the LAAW does the job of bunker busting just fine for less weight and size. I also learned that my old Gunner, Patrick Woellhof, has been instrumental in the LAAW’s return – small world the Marine Corps.

During Vietnam, a 40mm grenade was launched from a single shot, breach loaded weapon called the M79 with one issued per squad.

In my day, a rifle squad’s three fire team leaders carried an M203, an M16 with a single shot launcher mounted below the rifle’s barrel. 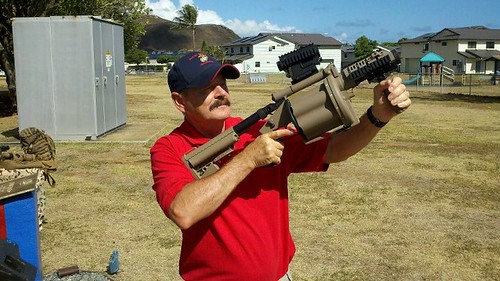 He was with 2/3 from 67 to 68 and could not help but say “We could have used one of these.” Sadly I heard the same thing from one of the Marines introducing me to the new MRAP. This series of mine resistant vehicles meant to replace the soft skinned hummers and trucks came all too late in the Iraq war where they were most needed. Here is a picture of the smaller version, and a truck like troop carrying variant is parked behind it. 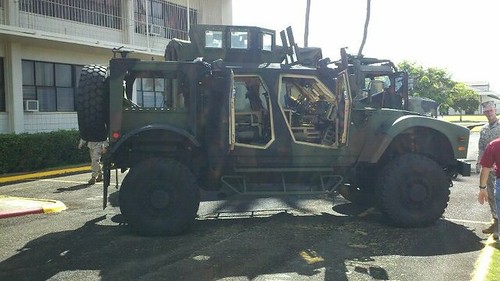 This remarkably young Staff NCO’s first combat deployment was to Iraq in 2004 when he saw many good men burn to death when their trucks were repeatedly hit by command detonated roadside bombs. He deployed a couple more times to face the same threat, riding in the same vulnerable vehicles. Yet in 2003 when it became obvious that the US was facing a long term occupation of Iraq to fight an insurgency bent on anonymously blowing up unarmored vehicles full of troops, a cheap, off-the-shelf mine resistant vehicle was ready to be imported from South Africa, but acquisition was delayed due to lobbying from domestic manufacturers who wanted more time to develop their own product before the big orders were made. This patronage political spending prevented the Department of Defense from deploying MRAPs in significant numbers until 2007, and the US Treasury had to pay a premium price to domestic producers to do so. This classic case of trade protectionism meets military Keynesianism cost the US taxpayer a bundle and many good Marines their lives.

It was a sight to see watching old Marines interact with the new. The old Marines marveled at how better trained this new generation is. They are of course better cared for and treated with respect by the civilian population as well – a welcome change of events from that bitter homecoming America offered its fighting men four decades ago. 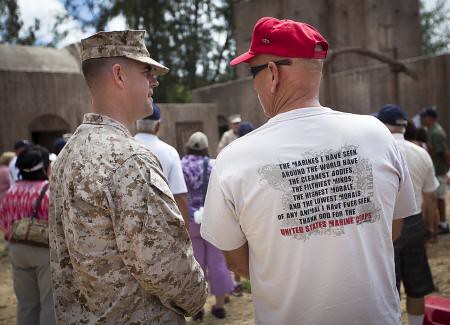 One thing however remains unchanged. Politicians still crave the glory of taking credit for military victory without fully considering the risks and the costs born on those who make it possible. A clear lesson the young Marines learned from the old is that long after a war ends, the price of war is still being footed by those who actually did the fighting and their families.