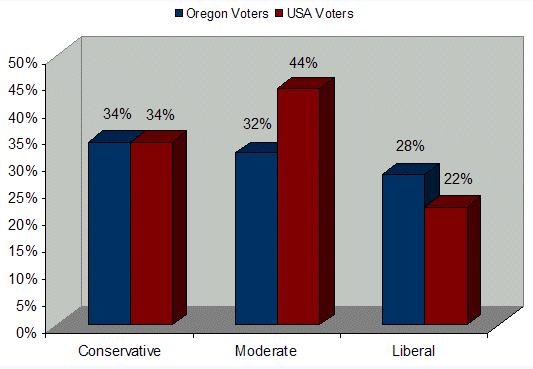 In polling, voters are given an opportunity to describe themselves as Conservative, Moderate or Liberal as a way to associate them with a particular set of beliefs. While these labels have many meanings in society today, they are often a useful indicator in polling as to how voters regard and react to issues and candidates.

Voter Ideology — Oregon vs. U.S.A.“If you had to label yourself, would you say you are a Liberal, Moderate or Conservative in your political beliefs?”

The Oregon electorate is very typical of most states in that urban centers (Multnomah County/Portland) are the bastions of liberalism. In fact, nearly half of Multnomah County voters define themselves as Liberals (46%). The Portland suburbs (Clackamas and Washington Counties) are a mixed bag ideologically, while Southern, Eastern and Coastal Oregonians are more likely to affiliate themselves with the Conservative label.

The analysis of voter ideology gets interesting when we look at the correlation between voter party registration, and personal political philosophy. For example, Republicans (32% of the state’s registered voters) are philosophically cohesive, with fully 71% of Oregon GOPs describing themselves as “Conservative.” Democrats (43% of the state’s registered voters), on the other hand, while clearly leaning left of center (49% describe themselves as “Liberal”), are more willing to linger in the middle, as 35% of Democrats describe themselves as “Moderate.” Oregon’s non-affiliated/Independent voters (25% of the electorate) are most likely to consider themselves Moderate, and the remaining Independents are divided between the Liberal and Conservative labels.

Beyond the correlations between voters’ partisanship and ideology, there are also some trends in voter philosophy by age and gender. Younger men and women (age 18-44) are more likely to affiliate with the Liberal label, while older men are more likely to find themselves in the center or right of center, and older women are only slightly more likely to align themselves with the Conservative label than the Moderate or Liberal ideologies.

Looking more closely at the voting behavior of Independents, we uncover several notable findings. In Multnomah County, the Independents behave largely as Democrats when it comes to voting, with the majority voting for “mostly or only” Democrats (54%). As we move out to the suburbs in Washington and Clackamas Counties, only a plurality of Independents there are true ticket splitters (47%), but the balance lean Democrat by a significant margin (34% vote Democrat, 19% vote GOP). In the rest of the state, the majority are true ticket splitters, but only in Southern Oregon do we find the balance leaning more toward the GOP.