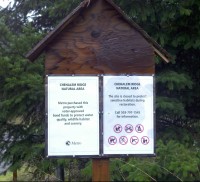 On December 18 Metro referred a five-year local option levy of 9.6 cents per $1,000 of taxable assessed value to the voters for consideration in the May election. If passed, the measure would raise about $10 million annually for maintenance of 12,400 acres of land Metro bought over the past decade with public tax dollars.

Unfortunately, very few voters will ever get to visit those areas. Most of the large natural areas are far from population centers, such as the 1,200-acre Chehalem Ridge tract near Gaston or the 1,100 acres purchased in the Sandy River Gorge.

More importantly, Metro doesn’t want you there. The agency has announced that if the levy passes, only five to fifteen percent of the funds each year would be used to provide access for the public, such as signage, parking facilities, public rest rooms, or trails. Many of the access points, now gated, would remain closed. This is because Metro’s top priority is restoring natural areas for wildlife, fish, and water quality.

Metro likes to promote the concept of “nature in the neighborhood,” but when it comes to spending our tax dollars to buy up land, neighborhoods will be locked out. The levy should be rejected until these priorities change.