Yesterday marked the forty-fifth anniversary of Milton Hoch’s second combat wound. I got a chance to interview him last weekend at Killer Burger on Sandy Boulevard, a place we both know well because it gives out free burgers to veterans during the Hollywood District’s annual Veterans Day Parade. 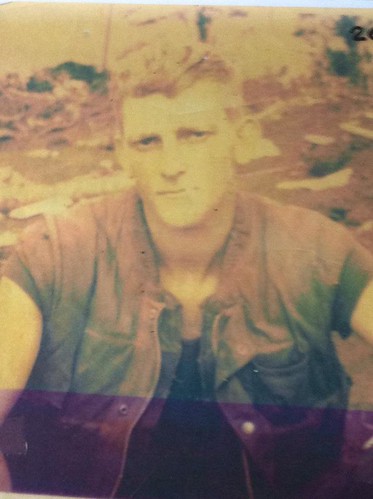 When most of his friends at Portland’s Benson Polytechnic were worried about their draft numbers being called up, Hoch voluntarily enlisted in the United States Marine Corps and found himself assigned to a rifle battalion that by several metrics appears to have seen more unrelenting combat action than any other ground unit in Vietnam, that battalion being the Second Battalion Third Marines. Of the Oregonians that served in 2/3 during Vietnam, only half came home alive, and all did so wounded one way or another. Hoch survived but only after two very close calls.

He earned his first Purple Heart a few months earlier on Operation Fortress Sentry, the last opposed amphibious landing in American military history. The concept of operations was to conduct mechanized patrols along the Cua Viet River near the DMZ in conjunction with blocking positions taken by one of its line companies which was to be inserted behind the enemy via helicopter vertical envelopment.

This classic “hammer and anvil” tactic could not be executed, because sudden typhoon weather conditions prevented most air operations, but the mission was not called off. Instead half the battalion landed ashore from the USS Ogden and USS Paul Revere on amphibious tractors without much helo support. Marines call these large floating armored vehicle “amtracs” for short and have been using them for landing on hostile beaches ever since the Battle of Tarawa in 1943. 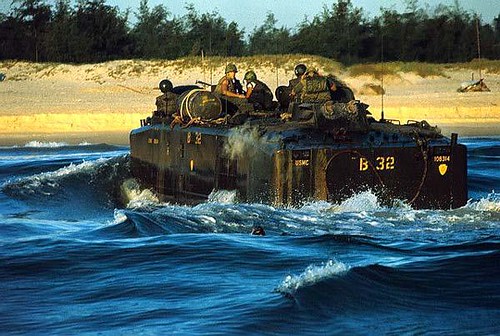 For the second wave, cargo nets were draped off the sides of the small aircraft carrier USS Tripoli so that the other half of the battalion could load into LCU “mike boats” leaving their helicopters on the ship. The new plan was to have these Marines in the LCUs link up with the 3rd Amphibious Tractor Battalion on shore so that the entire battalion could operate as a mechanized force. 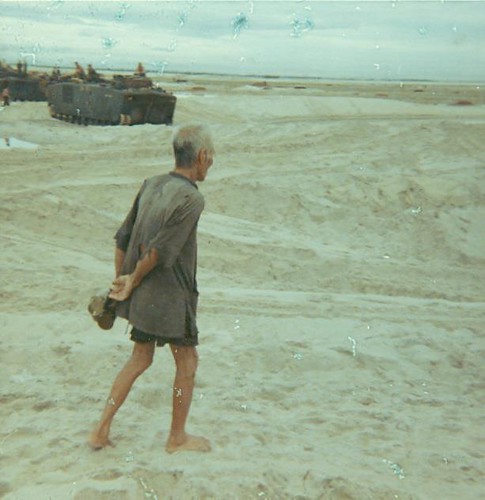 Initially there was no fighting on shore. The Marines were greeted by curious civilians who rarely saw Americans this close to the border with North Vietnam. 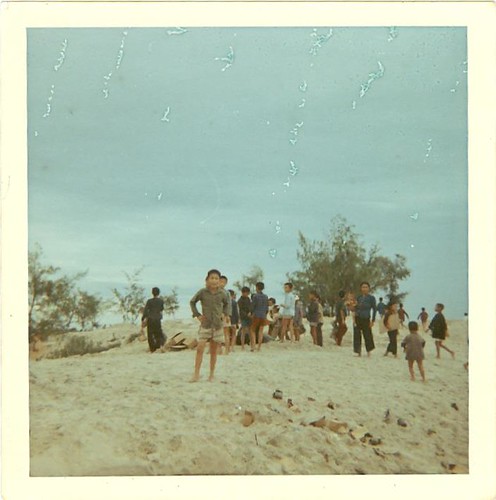 The transfer from LCUs to amtracs went off without a hitch, but as the battalion moved a couple miles along the river’s shore it began receiving very accurate indirect fire, fire that dogged them throughout the entire operation and could never be silenced. These captured French 75mm pack howitzers’ exact location could never be determined, but they were likely being directed by one of those smiling civilians or from one of the many boats traversing the river that were always within sight of the Marines’ position. 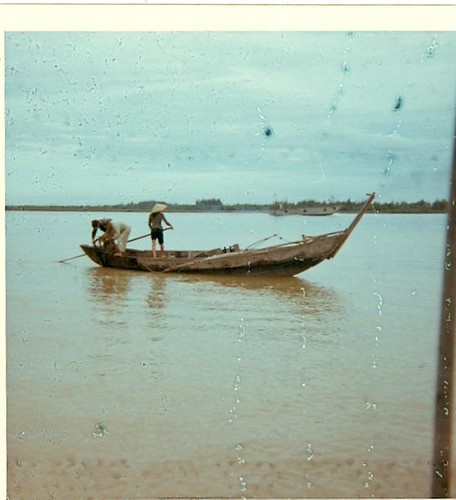 When the rounds first came in however, they were thought to be naval gunfire from the US Navy. Hoch and several other Marines were sitting casually on top of their amtrac when this picture was taken: 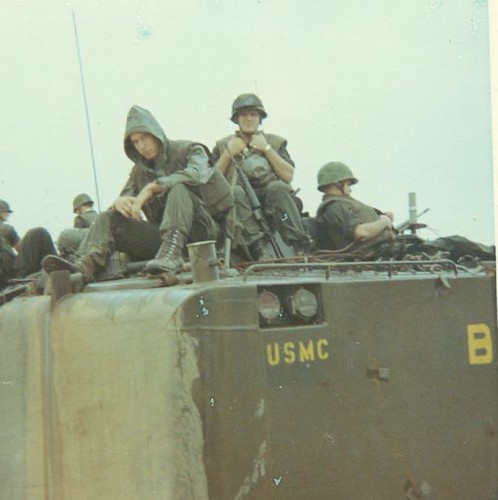 Hoch had just offered everyone a cigarette. In the picture he is on the other side of the amtrac with his radio’s large whip antenna fully extended, giving the track’s gunner a light. Hoch then lights his own as he walks toward Stanley Wojeck, sitting in the center. As Hoch makes his way to the other side of the vehicle, he overhears someone calling the naval guns telling them their rounds are coming in a little short. A US Navy fire direction officer responds “That’s not us firing.” This does not quite register with Hoch as he offers Wojeck a light. Wojeck shakes his head saying that he did not want to be the third man on a light, citing an obscure superstition. The Marine facing the right is named DeJesus who then holds out his hand for a cigarette saying “never fear DeJesus is here!” At the very moment the flame ignited DeJesus’ tobacco: BOOM! The NVA artillery had adjusted its fire and a round landed right where the cameraman who took that picture was standing moments before. Hoch was blown in the air landing a good distance away. His flak jacket saved his life, but Hoch’s exposed right shoulder was riddled with shrapnel, dripping his blood. Dazed and disorientated, he was medevaced the next day when the weather permitted.

By Christmas 1967, Hoch had recovered enough to return to duty. As a wireman he was assigned to a firebase called the “Triangle” near the north beach of Chu Lai where 2/3 was providing perimeter security. Hoch connected and maintained the wiring between the fire direction control center and each individual gun for the base’s battery Bravo 1/12. The security posture was tense, and Hoch does not remember a single Christmas luxury, not even hot chow. The only outward indicator of Christmas was a decorated tree outside the wire with a sign saying “American GI throw down your arms.”

No attacks transpired on Christmas Day, but on the 26th, Hoch was standing next to the fire base’s command post when several sappers that had infiltrated the wire launched an attack within the perimeter. Hoch jumped into a fighting hole armed only with a 45 caliber pistol. A NVA soldier came charging near him with a bayonet. Hoch fired, killing him, but as the enemy soldier fell, the bayonet ran all the way through Hoch’s right thigh.  It was a nasty wound being stabbed with a rusty blade of steel. HN John Bradford, a Navy Corpsman assigned to 2/3, sewed up one side but left the other open for fluid to leak out.

Despite suffering two combat wounds, Hoch still ended up completing his full tour in Vietnam. Purple Hearts were commonplace among the ranks of 2/3, but when Hoch rotated back to the states he suddenly found himself the recipient of some recognition.

In those days, many returning Vietnam veterans were met with hostility by the American public, but in Hoch’s case he was met with honors. After taking some leave at home in Oregon, he checked into the 9th Comm Battalion at Marine Corps Base Twenty-Nine Palms, California. A Colonel asked to see him, wanting to know if it was true he had been awarded the Purple Heart and was from Oregon. Hoch said “yes sir.” “Oh you’ll be perfect!” the field grade officer remarked and then asked Hoch if he had a set of dress blues, but the answer was “no sir.” His sergeant major was called in to see to it that Corporal Hoch got issued a dress blue uniform immediately, because Oregon Governor Tom McCall needed a wounded Marine from his state for the Republican Governors Conference that was about to be held in nearby Palm Springs, hosted by California Governor Ronald Reagan who wanted each governor to escort a wounded serviceman from their respective states.

Hoch was told he will be Tom McCall’s driver. When he and his sergeant major showed up inquiring about what kind of a vehicle he would be driving, Hoch was told he was not the governor’s driver; he would be the governor’s guest of honor. Hoch ended up sitting next to Tom McCall and across from Vice President Elect Spiro Agnew. Working the room at the event too was President Elect Richard Nixon. 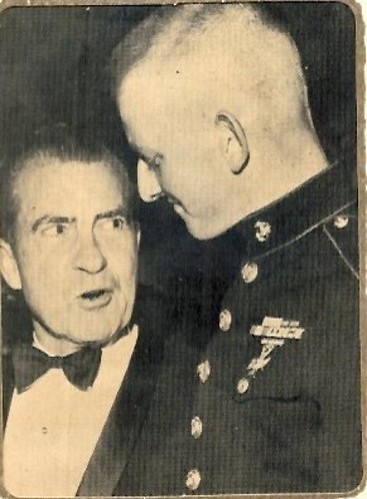 Hoch got out of the Corps as a sergeant, and despite a terribly scarred body and lingering wounds of the mind that are less visible, Milton Hoch is understandably proud of those four years of his youth wearing the uniform of a United States Marine. He organizes an annual Marine Corps Birthday Party every 10th of November at the Stark Street Pub and Grill which is open to all former Marines from all eras. 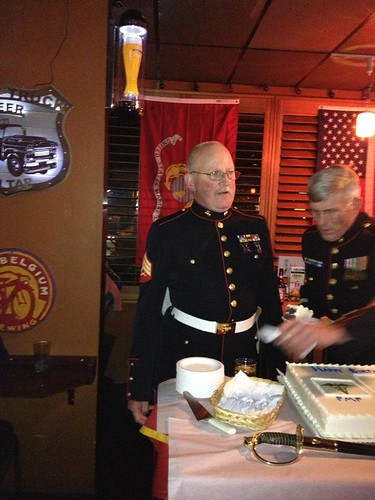 Like everyone else who survived a tour with 2/3 Hoch has his challenges, but he has lived a full and vibrant life. There is one thing however that he longs for. Hoch wishes he could light up a cigarette for DeJesus one more time.