Tragedies like the recent shootings at the Clackamas Town Center and at the Sandy Hook Elementary School in Connecticut bring people together. We are horrified and saddened at the senseless and tragic killings, and know that everything possible needs to be done to prevent them in the future.

Accomplishing that brings out different ideas and disagreement on how best to prevent these horrific tragedies. That’s where we can have a civil discussion, with the common goal of protecting innocent lives in the future.

It’s clear that in the upcoming congressional session in Washington, DC, and in the upcoming legislative session in Salem, lawmakers will be looking at what can be done. The ideas in Oregon include increasing security in schools, providing armed responders in schools and introducing more gun control.

To aid in the discussion here in Oregon, and to provide context and perspective, I’ve assembled the following data on gun deaths in Oregon. 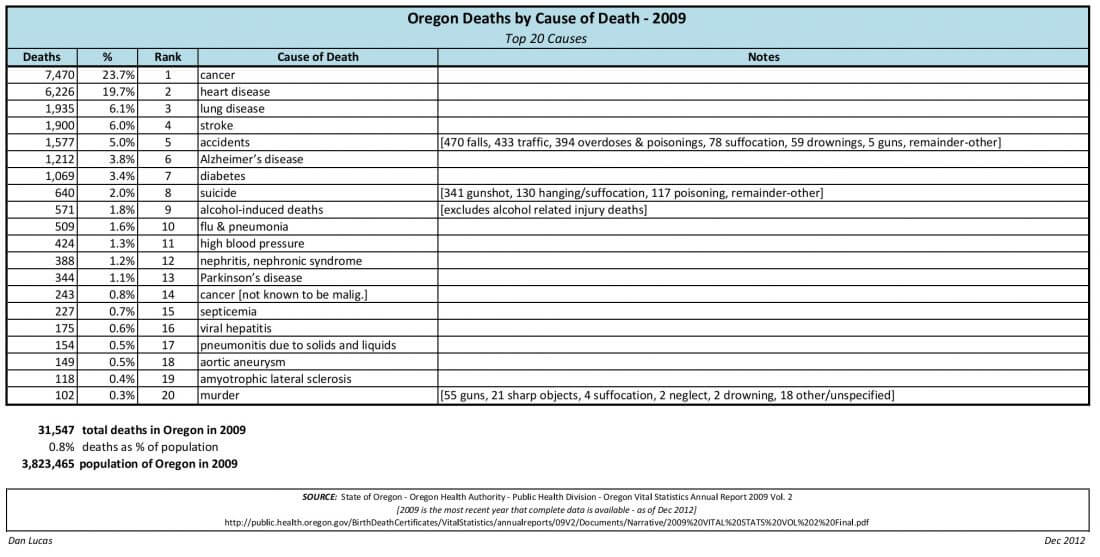 Notes on 2009 gun-related deaths in Oregon:

Regarding the use of guns in suicides in Oregon – there does not appear to be a correlation between gun control and suicide rates. Sadly, people wishing to commit suicide appear to change the means when another is restricted. For example, according to the World Health Organization’s data, Japan has a much higher rate of suicide than the United States. In 2011, Japan had the 7th highest suicide rate in the world, and the U.S. was number 38. A 1999 New York Times article on the high rate of suicide in Japan noted “Because gun ownership is severely restricted in Japan, many Japanese resort to throwing themselves in front of trains, hanging themselves, jumping off cliffs or overdosing, the police say.”

Of course, gun-related deaths are just one of many factors in the discussions related to introducing more gun control. Other factors include: how many crimes are prevented by firearms (for example, did a concealed handgun license (CHL) holder end the recent tragic shooting at Clackamas Town Center?, the off-duty sheriff’s officer who stopped a restaurant/theater shooting before anyone was killed on 12/16/2012 when she shot the attacker four times, or the 71-year old man who stopped an armed robbery back in July in Florida, etc.), how effective are gun laws, etc.