Today in 1859 Oregon was admitted into the union as the 33rd state. Thus beyond the rituals of Valentine’s Day, today is also a moment to reflect on this unique place we live in. I have traveled a great deal across this country and have already filled several passports with visas from abroad, and still I can honestly say there is no other place I would rather live. Part of this is just natural socialization; I feel the same way about my siblings as I do about the state in which I was born and raised primarily because I am behaviorally hard-wired to do so. Yet on top of that, Oregon is a very interesting place, particularly for political junkies.

Like its competing air masses that constantly clash against each other, making the weather here so hard to predict, Oregon’s political culture offers many surprises as well, and it was this way from the beginning. Different geographical environments in Oregon fostered the growth of very different Native American nations that clashed with each other. Today’s conflict between Israelis and Palestinians seems like a kumbaya love fest compared to the bitter struggle for land between the Cayuse and Nez Perce tribes.

Before Royal Navy Captain George Vancouver claimed what the British would later call the Columbia District and the Americans would call Oregon Country, this territory stood as a frontier between the overlapping claims of the empires of Spain and Russia. It then became a similarly contested piece of land between our former colonial parent and a young America that began to envision its own expansionist ambitions. 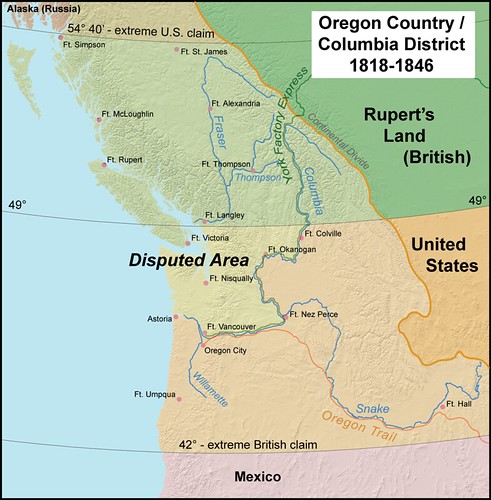 This dispute, left over from the Treaty of Ghent that ended the War of 1812, the first war the United States ever lost, almost sparked a rematch. It would be helpful for us to look back on that war we were waging two centuries ago. The US tried to conquer Canada and was soundly defeated in that regard. However dramatic for them to sack our capital, it was painfully expensive for Britain to mount these punitive expeditions for which they were quick to end as soon as we relinquished our northern claims on the eastern side of the continent.

A final settlement of our mutual borders on the western side of North America was left undecided. In 1818 it evolved into a joint administration, but by the 1844 presidential election Democratic candidate James Polk campaigned on a platform of continental conquest that popularized the phrase “manifest destiny” claiming all of the Oregon Country for exclusive American sovereignty. Once elected, he led a Democratic Party whose political slogan became “54 40 or fight!” which is now the name of a great blog ran by Multnomah County Republican Party Chair Jeff Reynolds. The British were quick to cave, and yet Polk settled on the 49th parallel, angering his hawkish party base.

Oregon has remained a deeply divided place ever since. It may be a blue state, but most of its territory remains redder than Alabama. Roll tide Roll! I grew up having my conservative parents tell me how terrible it is that Oregon is so liberal and so un-churched, and yet when I later found myself living in actual conservative, religious areas of the country I was surprised to find it nauseating. In the Marine Corps I was stationed at Camp Lejeune, North Carolina and I later went to college in rural Michigan. For a graduate of Damascus Christian School, whose faculty was highly influenced by Multnomah School of the Bible in the era of Dr. John G. Mitchell who famously berated those who did not share his encyclopedic memory of biblical text with the rhetorical question “Don’t you folks ever read your Bibles?” I simply could not fathom why so few people in the so called “Bible Belt” held so little knowledge of the actual content of scripture. Evangelical Christians may be a smaller percentage of Oregon’s population, but the intensity of their faith is stronger due to the cultural contrast. There may be a ubiquity of religion in the American South and rural Midwest, but outside of Oregon, there are remarkably few opportunities to grow up in a church like I did as a member of Good Shepherd when Randy Alcorn and Stu Weber were on the staff.

Oregon is a special place, and I think the best way to celebrate its birthday is to become a member of the Oregon Historical Society here. They will be throwing a big party at their downtown museum at noon today. Maybe I’ll see some of you there.