I made it out to the Oregon Museum of Science and Industry’s new Mythbusters exhibit and definitely recommend it. A spinoff from the Discovery Channel’s popular program of the same name that sets up outlandish experiments to either falsify or confirm urban legends, this new attraction displays several of the original objects from the show’s more famous episodes as well as several controlled experiments for you to do yourself. I have been having fun at OMSI since I was a little boy, and it helped make me who I am today. Mythbusters will run until May 5th offering a great way to get kids interested in the fun of empirical scientific inquiry.

I later went upstairs to the more permanent displays and became immediately struck by a mythbusting exhibit of its own in Life Hall called Beginning the Journey which like its name would imply is about the beginning of human life. It is a complete display of human development in every week of pregnancy from conception to birth providing real specimens.

Beginning the Journey stands out as the only exhibit at OMSI that first requires a sign warning people before entering that what they are about to see can be disturbing, and disturbing it is in a human cadaver sort of way. The first couple of weeks are predictably specimens of indiscernible shape, but remarkably soon down the line, still in the first trimester, OMSI patrons find themselves looking into the faces of little human beings, little human begins who are dead. OMSI is a loud place with kids running around chased by parents talking on their cell phones, but it does not take long before a somber mood silences people in this exhibit like they just entered a funeral home. 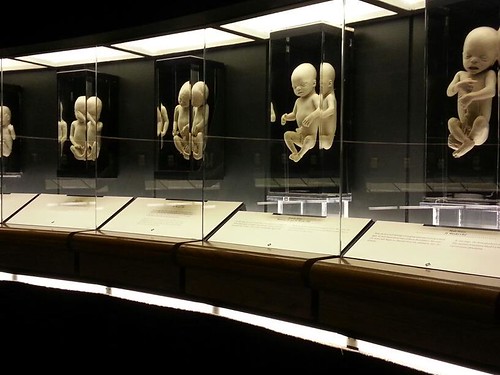 Beginning the Journey empirically portrays the humanity of the unborn child, and everyone who enters its somber, black, closed off room responds accordingly. Indeed for anyone like me who has spent time in Israel, this exhibit’s circular design bears a striking resemblance to the domed Hall of Names at Vad Vashem, the Holocaust Museum in Jerusalem. 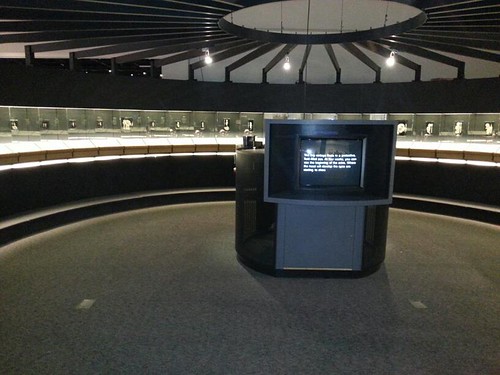 The myth OMSI busts has obvious policy implications in the highly charged politics of abortion. The most popular form of pro-abortion argumentation is to deny the humanity of the unborn. This has extended the life of a seemingly never-ending falsehood first postulated by the 19th Century German biologist Ernst Haeckel known as “ontogeny recapitulates phylogeny” claiming that our prenatal development tracks our evolutionary development. You would be surprised how many healthcare professionals even to this day in the secret privacy of their doctor-client privilege tell young women this little fib, that if they hurry up with the abortion procedure they will just be removing a fish, just to make her feel better, or more likely, since abortion services are a commercial product after all, to close the sale, securing the consent of the consumer to purchase the product.

This myth is so embarrassingly falsifiable that the best approach to perpetuate it in public is to focus instead on the privacy of the matter. The popular pro-choice argument along these lines allows for the mother to decide if she is killing a tadpole or killing a human with the understanding that her private pressing desire to end her unwanted pregnancy as soon as possible will overshadow any excessive introspection.

There are of course more intellectually honest pro-choice arguments. What these more rigorous arguments for abortion rights all have in common is an acknowledgement of the humanity of the unborn. Their soundness lies on the truth value of their normative premises, thus they cannot be falsified. Of course that means they cannot be proven either.

There is the Lockean liberal approach best articulated by MIT Professor of Philosophy Judith Jarvis Thompson in her 1971 Philosophy and Public Affairs article titled A Defense of Abortion. Rejecting a duty to support others’ lives, her argument has become known as the “violinist defense” and can be read in its entirety here.

There is also the far more influential Rousseauen progressive approach that identifies the asymmetry of responsibility among the two genders in childbirth as the central cause of inequality between men and women. By asserting a hierarchy of values that places the mother’s right to gender equality above her child’s right to life, this line of reasoning is quite congruent with many of the other historical applications of the writings of Jean Jacques Rousseau.

The best articulation of this form of radical feminism can be found in the reasoning of Justice Ruth Bader Ginsburg on why Roe v Wade was wrongly decided because she asserts the Equal Protection Clause of the 14th Amendment is the right of abortion’s true jurisprudential foundation, as she wrote with much pith in her dissent to the 2007 Gonzales v Carhart decision which affirmed the Partial Birth Abortion Ban Act of 2003:

Women, it is now acknowledged, have the talent, capacity, and right to participate equally in the economic and social life of the Nation. Their ability to realize their full potential … is intimately connected to their ability to control their reproductive lives. Thus, legal challenges to undue restrictions on abortion procedures do not seek to vindicate some generalized notion of privacy; rather, they center on a woman’s autonomy to determine her life’s course, and thus to enjoy equal citizenship stature.

It remains to be seen whether or not the broader public will buy this argument, but its popularization seems to be core to the mission of every university’s department of women’s studies. Warning in 1995 that the increased access to ultrasound technology threatened to undermine women’s support for their own abortion rights, the talented feminist writer Naomi Wolf argued in her canonical New Republic article Our Bodies our Souls for a pivot away from the rhetorically easy but factually challenged denial that abortion kills children. Young women need to be taught that their right to abortion is a right to kill, she argued, because killing is OK; we simply need to hone the ethical framework around when it should be allowed:

I’m not sure Joe and Joelina public, standing in the political center, will sign on to Wolf’s logic, but I salute OMSI for forcing the issue one way or the other with its very bold exhibit.